Hinge, the dating app that uses Facebook to connect you with friends of friends, has today announced that it will be sunsetting its original app. In its place, Hinge will be launching an entirely new version of the app, focused on relationships.

The new app, built from the ground up, will go live on October 11. Oh, and by the way, the new app will be a paid app for all users.

CEO Justin McLeod said that the new Hinge, which is meant to feel more like a mobile-first Match.com or eHarmony, will be far less expensive than other paid, relationship apps, costing around the same amount as your Netflix subscription each month. That said, he didn’t give any exact details on the pricing structure.

This isn’t much of a surprise. Back in February, we reported that Hinge would be launching a premium version of the service that would give users a clear alternative in their search for real relationships, as opposed to casual dating and hookups.

What’s surprising is that Hinge is ditching its old app altogether, and along with the old app, the company is also ditching the swipe.

We came across this website, called The Dating Apocalypse, that goes through all the reasons why swiping (a format first launched on the incumbent app, Tinder) is not the right mechanism for folks who are looking for a serious relationship.

It’s easy to see why. The swipe has often been characterized as a gamification of dating apps, wherein the swipe itself (casting aside one card to see who’s lurking on the next card) is just as fun as having a conversation with one of your matches.

“Most of the dating apps out there are games designed to keep you single, and swiping is the most iconic feature of these games,” said McLeod. “That’s why we’re not even calling the new Hinge a dating app. We think of it as a relationship app.”

McLeod hasn’t said what the new mechanics of the app will be, but he did confirm that there will be no swiping in the new app. He also added that building out a user profile will be a more in-depth experience, as opposed to the usual process of linking up with Facebook and choosing a few photos.

Other than that, we know very little about the new app, save for the fact that the engineering team has been heads-down working exclusively on the new app. McLeod admits that this level of focus on the new project might have been at the cost of the original Hinge, which has seen diminished growth over the past year.

The new app launches in a couple of weeks, but in the interim, old Hinge users should definitely ask for the digits from the matches they don’t want to lose. Chances are, the new Hinge will launch as a totally blank slate, and current matches, profiles, and messages will be gone forever starting today.

You can check out the email sent out to Hinge users here: 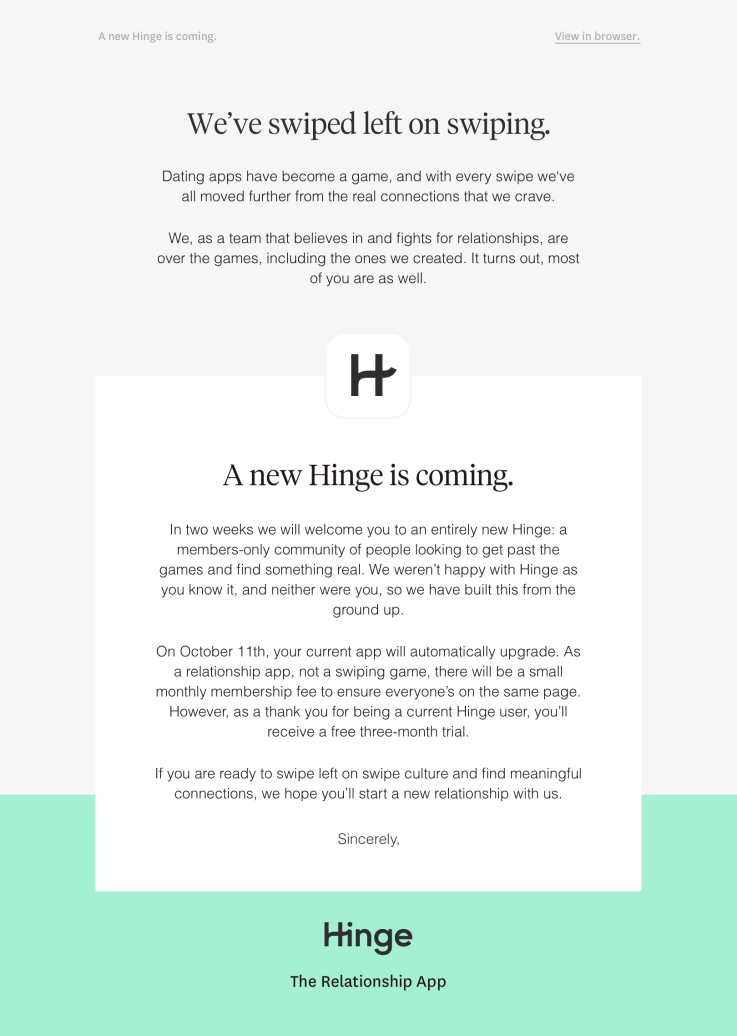