If you’re at all interested in retro gaming, you’ve probably come across 8Bitdo, the company that makes throwback Bluetooth controllers inspired by classics like the SNES and NES. Now, it’s paying homage to another classic, the Apple II.

The company’s new Kickstarter project seeks funding for a game controller called the AP40, featuring a full load-out of buttons, analog joysticks and compatibility with a number of devices. But what’s special about the controller is its design, which takes cues from the case designs of hardware like the Apple II, and borrows its color scheme from the multicolored Apple logo that adorned the case of the classic Mac.

There’s even a silicon green leaf that plugs into the micro USB port the controller uses for charging, and an aluminum stand accessory takes design cues from the Apple II, complete with a decorative keyboard and slot for holding your smartphone or tablet.

The AP40 has the same compatibility range and limitation as other 8Bitdo controllers, which means that it’s not MFI and therefore not compatible with iOS games that rely on Apple’s native game controller APIs, or with the Apple TV. It does work with iCade-enable iOS games, however, and it also works out of the box with Macs, Windows, Android, Wii, PlayStation 3, RetroN5 and Raspberry Pi running Recallbox.

Also up for funding is a Retro Receiver designed for use with the Apple II/IIc, which will let people who own that classic computer use the AP40 to play games. The controller also works with the company’s Retro Receivers for NES and SNES, adding compatibility to those classic consoles. 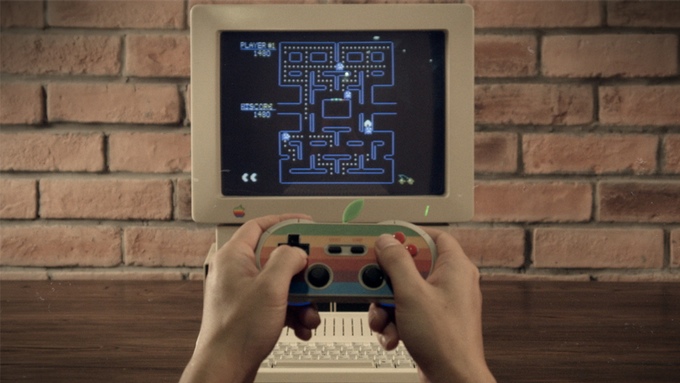 Pricing for the AP40 starts at US$49, and the company hopes to ship to backers beginning in January, 2017. Luckily for potential backers, 8Bitdo has a good reputation and has proven it can handle manufacturing this kind of device at scale.