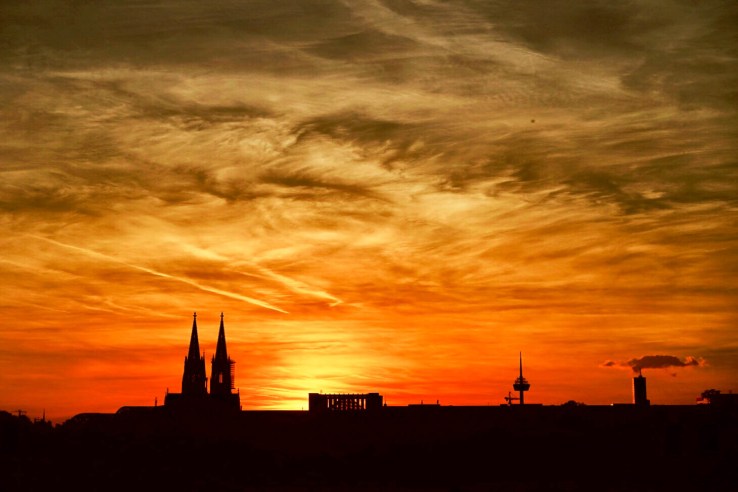 This is a photo of a sunset over Cologne. It was taken on a mirrorless camera, copied to my smartphone using Wi-Fi, edited using Enlight, then shared to Instagram within a couple of minutes of being taken. If my camera didn’t have Wi-Fi, it would probably still be sitting on a memory card somewhere. That would have been sad.

Spotted at Photokina, the world’s largest photography trade show: A professional photographer, taking a photo, then taking a picture off the back of their camera to share the photograph on Facebook. It’s not that unusual an occurrence, but it served as the perfect parable on quite how vigorously the camera manufacturers have self-copulated themselves into oblivion. 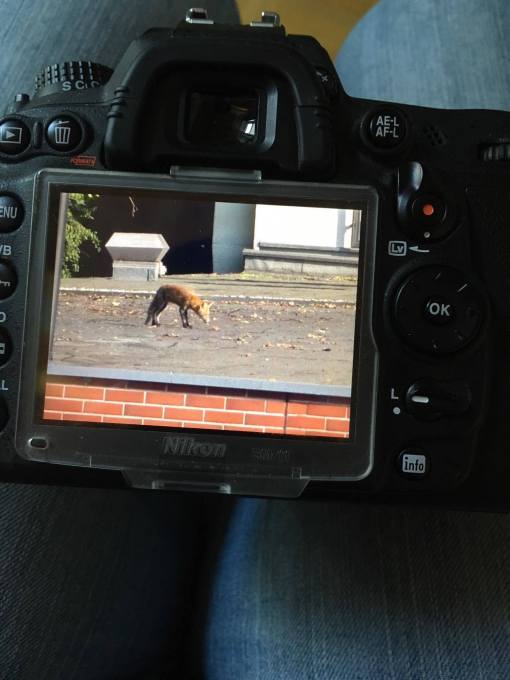 We live in a world where speed is of the essence. We take photos at 10:03 and we expect them to be on Facebook, Instagram, Snapchat, EyeEm, Twitter and what-have-you by 10:05.

This instant sharing is the strength of mobile photography, of course. How could it not be; modern mobile phones include the cameras and high-speed always-on connectivity to make fast sharing by default the only sensible route.

If your camera has a data plan, sharing your experiences becomes quick, easy and natural. This is why Apple is running the Shot on iPhone advertising campaigns. This is why the iPhone 7 announcement dwelled on the camera and its advantages for so long. That’s why Samsung’s S7 has one of the best cameras we’ve ever seen in a mobile phone. Microsoft knows this, too, and is pushing hard on the “phone for photographers” line with the Lumia series of phones. Although, sadly for Microsoft, a vanishingly small number of people actually wanted a Windows Phone.

The problem? “Proper” cameras generally don’t come with the option to insert SIM cards, which complicates matters somewhat. A big reason for this is the borderline insane prices on data plans in the U.S. A passionate photographer might be willing to spend $10 per month to achieve mobile connectivity for their camera. $100 per month? Probably not. Samsung tried their best with its Android-powered, Wi-Fi and SIM-card enabled Galaxy Smart Camera, but ultimately, the superzoom camera was an utter disaster. How bad? I’ve never seen a single one of them in the wild and Samsung appears to have quietly dropped any mention of it from its website.

In addition, mobile phone standards still vary around the world. While ‘world phones’ are becoming more common, and you can expect to be able to use your high-end phone all over the world, those radios aren’t free.

So we are stuck getting our photos from our cameras to our phones or computers somehow to share them. And that is precisely the rub. It’s a lot harder than it should be.

The Big Guys are getting it wrong 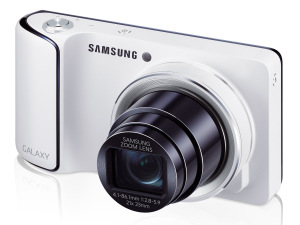 Samsung’s Galaxy Camera was a great idea, but never seemed to go anywhere. Not least because cell phone plans in the U.S. are insanely expensive.

Cameras are getting measurably better all the time, but better image quality is only half the battle. Arguably, cameras are ‘good enough’ now — that would explain why SLR owners are replacing their cameras with greater intervals than they used to at the dawn of digital SLR technology — but the rest of the taking photos and sharing experience is stuck in a bygone era.

More crucially, perhaps, is that the population using dedicated cameras are changing faster than the camera manufacturers are adopting to the change.

All the big camera manufacturers have been shipping cameras with Wi-Fi built in for a while. Canon’s first attempt in a high-end camera was the Canon 6D. A great camera, for sure, but jamming white-hot, rusty nails into your eyes was preferable to actually configuring and trying to use the company’s Wi-Fi app. Sony’s A7 had a shoot-then-copy-to-your-phone solution that actually worked. Progress, and it wasn’t perfect, but at least it’s usable.

Canon finally introduced Wi-Fi in its high-end 5D line last week, but the functionality is absent from the company’s flagship $6,000 1D X mark II, unless you buy the optional ‘Image Transfer accessory’. For an additional $600 on top of your already credit-card-meltingly expensive, top-of-the-line camera. Insert facepalm here.

Wi-Fi is a pain in the butt

There are a couple of inherent problems with using Wi-Fi for image transfer; the way it is usually done is that the camera poses as a hotspot and you have to connect your phone to it, which involves a trip to the Settings app. If anything happens to the Wi-Fi connectivity (a worryingly common problem on most camera platforms, in my experience), you need to leave the app, re-connect to the camera, and return to the image copying app. Hardly a very encouraging user experience. Not least because most phones assume that if you are connected to Wi-Fi, that is your internet connection, too. Sharing your photos, then, involves a cumbersome process of disconnecting and reconnecting to Wi-Fi, using the phone’s data plan, and other steps.

It’s confusing if you know how it works under the hood, and borderline impossible if you don’t. From a technical point of view, fully understand why this process is clunky. From a usability point of view, I just simply don’t care about the excuses. Camera manufacturers – be better.

Bluetooth is a better option, but too slow 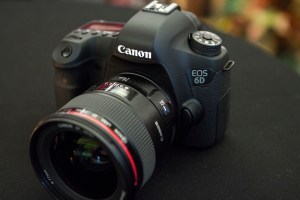 Canon’s 6D included Wi-Fi functionality, but the app was so bad the company might as well not have bothered.

One unlikely ally in this battle may prove to be Bluetooth — Nikon’s recently launched baby-SLR D3400 eschews Wi-Fi in favor of Bluetooth. While Bluetooth’s transfer speeds are lackluster, at least the ease of connectivity is a blast of fresh air. The company’s SnapBridge solution is the only thing that shines as a ray of hope in this abyss, so fingers crossed that this new ecosystem will finally start to address the issue.

There will always be a slice of the market that puts photo quality above all else: Advertising, product photography and high-end portraiture among them. In other bits of the photography world, however, speed is the #1 concern. There are sports photographers who are now operating with smartphones. 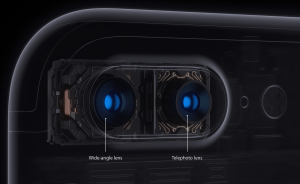 iPhone 7 adds two prime lenses. That’s so cool I barely know what to do with myself.

Apple even gave one of the iPhone 7 Plus phones to a NFL photographer ahead of launch to show what it can do. Why? It isn’t down to the image quality, I’ll tell you that much – an iPhone is no match for a full-frame SLR with a 600mm lens on a football field. But it has other advantages. Being able to tweet out a play seconds after it happened is, in some circles, more important than the artistic love that goes into crafting an amazing sports photo.

The bigger picture here is the shift that has been happening in photography over the past decade. People aren’t opposed to high-quality photography, but if you look at how most people create and consume photographic content, there’s a huge change.

On holiday, people are more likely to bring an SLR or advanced compact camera, but those photos typically get downloaded, edited, and shared after you get home. Or, more realistically, the photos are taken, copied onto a hard disk and then never looked at again. As more and more of us are living our lives on the pulse of what’s happening in the lives of others, even a few weeks of delay is too much: “Hey, I thought Eddie was in France last month, why is he posting pictures now?” 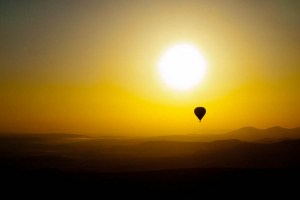 Some travel photos are worth waiting for. Most probably aren’t. In a world of rapid sharing, seeing what’s happening when it happens is paramount.

The exception might be people who are taking photographs that stand the test of times — artistic, technically close to perfect, and worth hanging on your wall. But let’s face it, that isn’t most of us.

When you talk to casual — and even pretty serious amateur — photographers, you’ll discover that everybody would love to have higher quality photos in their lives. Drill deeper, however, and you’ll find that this desire rarely extends to actually carrying a hulking big camera around. Photography has shifted to being about sharing on social media. And that’s only worth doing if it happens quickly.

Camera manufacturers know this. They must do. They can’t be so stupid as to see the graph of SLR camera sales and not understand why it is pointing downwards at an angle that would put any CFO’s sphincter muscles on high alert.

And yet, even at this year’s Photokina — the biggest celebration of photographic equipment in the world, which this year was smaller than I’ve ever seen it — I see very little evidence that the camera manufacturers are prepared to offer their mainstream customers the solutions they want. I can only hope for their sakes that they’re still around to offer proper solutions the next time Photokina rolls around, two years from now.