Learning any new subject can be challenging — for many students, that subject is math. Fortunately, Photomath is here to help. Photomath, a finalist in the Startup Battlefield at Disrupt Europe 2014, is an app that solves complex math problems using your smartphone’s camera.

Since Disrupt, Photomath founder and CEO Damir Sabol tells TechCrunch that the app has been downloaded over 36 million times on Android and iOS, and is consistently one of the top 5 educational apps in the U.S.

This week, Photomath released version 3.0 of its popular app on the iOS app store, bringing a major new update that should make it even easier for iOS users to solve math problems. The app previously was only able to read printed text, i.e. from textbooks; however, the new app now instantly recognizes handwriting, so users can write out problems and have Photomath solve them by simply pointing their camera at the paper.

The update also brings a new math expert system, Photomath+, that solves problems similarly to how a human would, and walks users through how to solve the problem themselves with a colorful and useful step-by-step guide. This system seems to address the tension between having an app do your homework versus having an app help you learn.

The Photomath+ service is free through November 30, but will cost a premium after that time. Sabol tells us the company is still finalizing the pricing and subscription model for Photomath+, and more details on the price will be available later this year. The app’s core services, like solving problems with a camera, will stay free forever.

These new features are available for iOS now, and will be coming to Android by the end of the month. You can download the Photomath app for iOS or for Android. 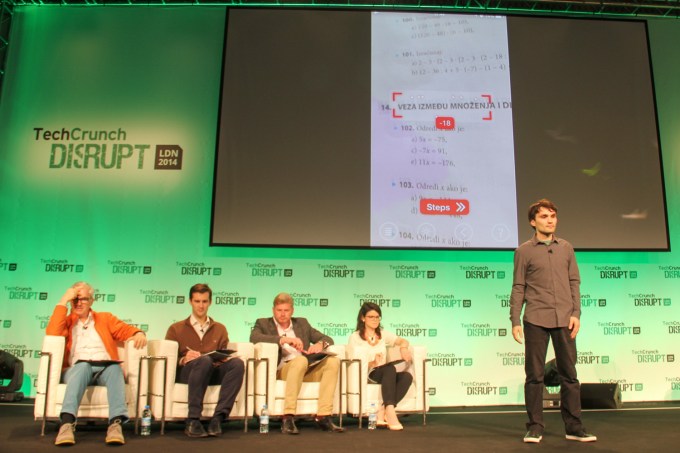 Disrupt London 2016 takes place December 5-6 at London’s Copper Box Arena. We hope to see you all there.