“Demand for GoPro is better than it’s ever been,” Nick Woodman explained to a rapt audience at GoPro’s mountain press conference yesterday. “Demand is kicking tail,” he said as the crowd cheered loudly.

That’s how it went pretty much all day. Enthusiastic uniformed GoPro employees as far as the eye can see, beginning with a morning press conference that featured the enthusiastic C-level executive dropping to his knees on stage to pull the company’s new drone from its custom backpack to audience applause.

But, as Woodman explains, the Karma isn’t just a drone. And also, he doesn’t like to use the word “company” to refer to GoPro, he likes to think of the organization as a group of friends or perhaps a family working toward some common cause.

“GoPro is so far from a consumer electronics company,” he tells the audience at the tail end of a day of activities aimed at testing its newly announced hardware offerings. “It just so happens that our products have electronics in them. GoPro is an experience sharing company.” 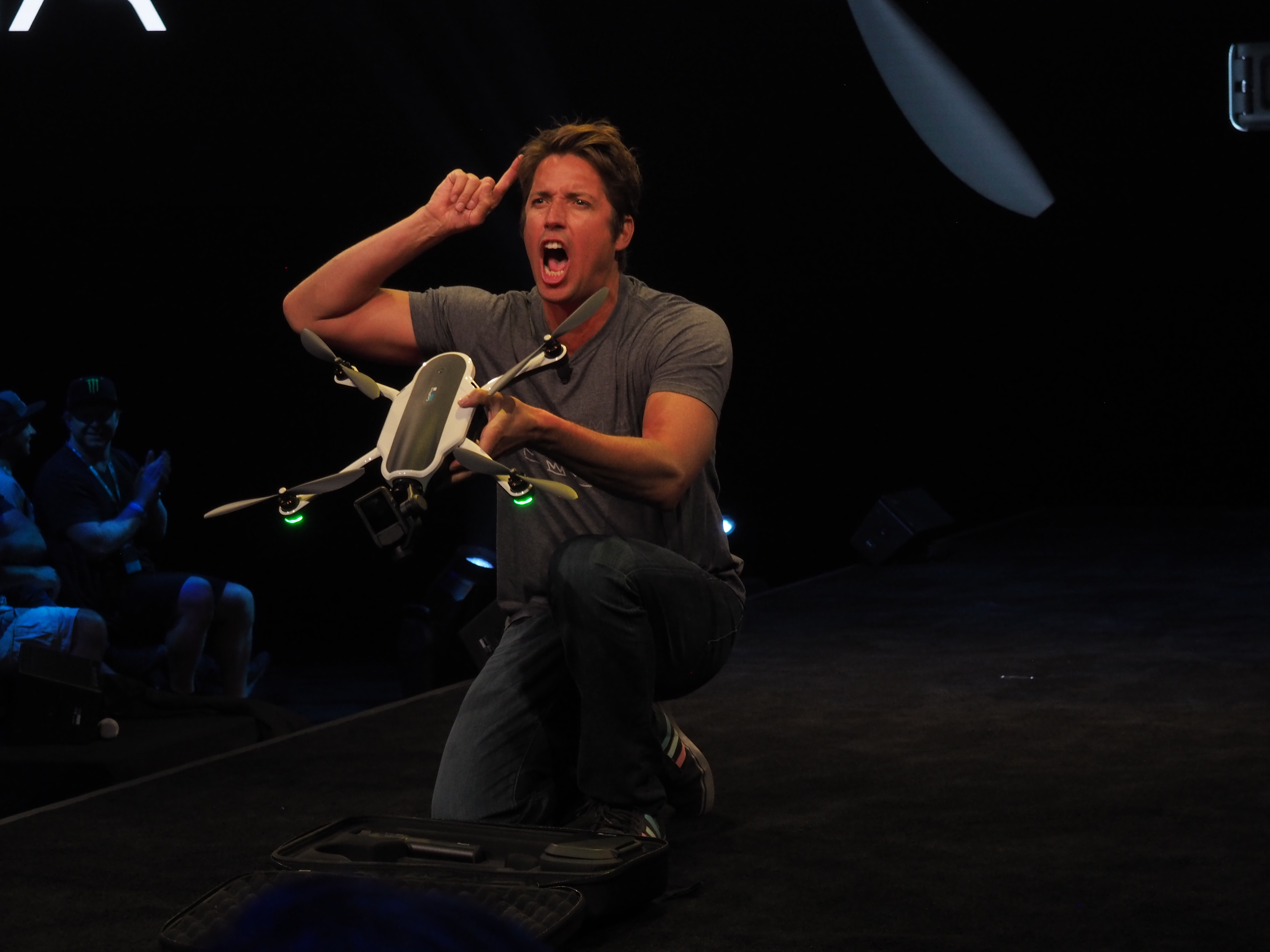 Woodman refers to lofty concepts like chi and reincarnation when talking about the company’s newly unveiled drone – and suddenly it becomes pretty clear that GoPro didn’t just stumble upon the name Karma because it sounded good or was in a Radiohead song. Woodman says he believes in the power of his company’s technology to effect positive impact on its users’ lives. Toward the back where I’m seated, a woman in GoPro clothing passes out complimentary Coors Lights.

GoPro certainly knows how to throw a party, and the company’s made the international press a part of the festivities. It’s all a big to-do, away from the usual conference room meetings. A big and almost certainly costly undertaking, though between the rock climbing and ziplines, most of the international press members present don’t seem too put upon with the long trek to the Sierra Nevadas, even if it’s a rather resource intensive undertaking to try out a pair of new cameras and score a few precious minutes with the company’s new drone.

The day’s extreme sporting events dotting the pine tree blanketed mountain high above the California/Nevada state line are punctuated by high fives and hollers. A guy walks around with a speaker strapped to his chest, echoing electronic music through the Squaw Valley off-season. Employees unironically toss words like “sick” and “stoked” into casual conversation. The Red Bull flows like wine. 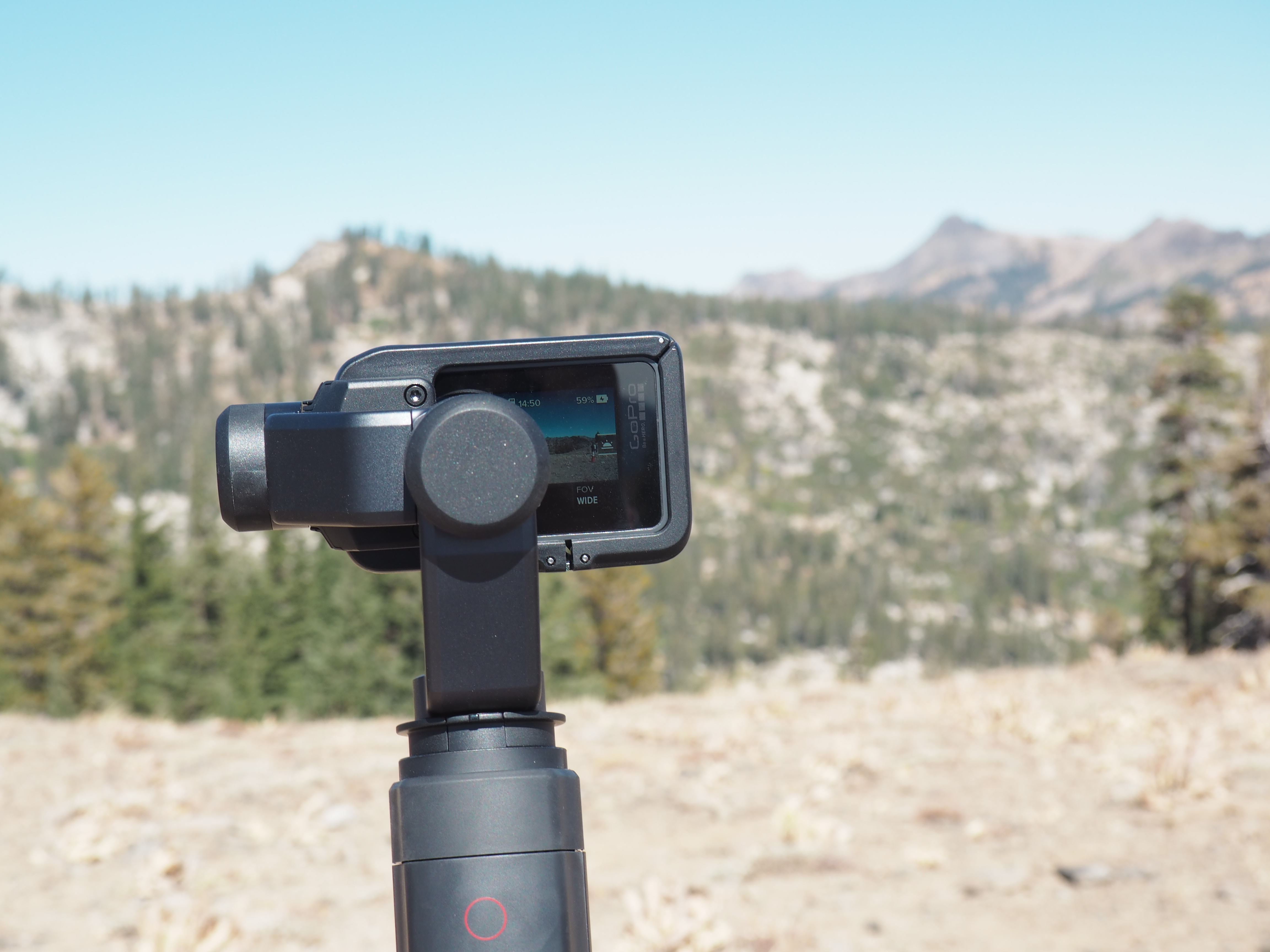 Three key hardware devices made their debut on-stage yesterday morning – two versions of the company’s action camera (don’t call it an action camera) and the aforementioned, long-awaited drone. The consensus, if one can be found, is that the diehard seem pleased, stoked by general sickness and the tech press is somewhat disappointed. Though we’ve long ago resolved to the fact that we’re impossible to please.

Action cameras (don’t call it an action camera) have been good to GoPro. They’re what transformed the company from unknown a hardware startup looking to make handheld cameras for surfers into one of the best known technology names of the past 10 years. And indeed, GoPro does them well. It will continue to do so, even as competition floods in from companies large and small, and supply seemingly begins to outstrip demand.

There’s also something to be said for doing what you do well, and giving the people what they want. But GoPro’s newest products feel more like iterations than revolutions, two years after the company’s last major release. 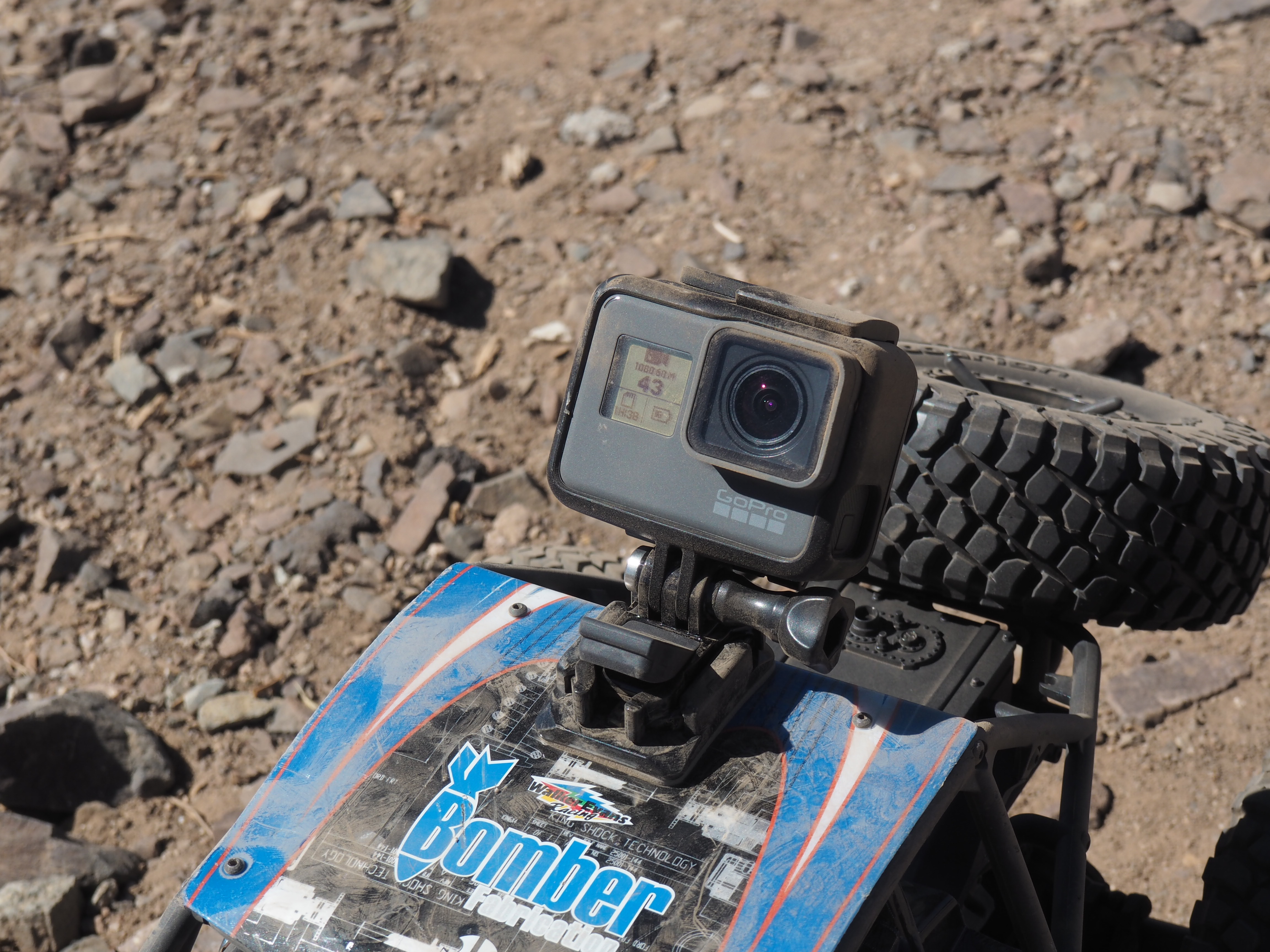 And besides, nobody came here to talk about the Hero – least of all GoPro. It’s been seemingly forever since GoPro first let slip that it was setting out to work on its own drone. Back then, the company teamed with DJI to bring their respective expertise to product that might someday make the drone truly mainstream.

As evidenced by the considerable shade tossed up on Twitter by DJI’s Corporate Communications Manager, however, that relationship has long since soured, tossed on a refuse pile and summarily lit on fire.

I ain't worried about a thing.

The company has also had a high-profile relationship with fellow California startup, 3D Robotics, a partnership that involves some deep integration and also resulted in the drone maker becoming the first third-party to use GoPro branding on its packaging with the company’s blessing.

For the past few weeks, GoPro has offered up Karma teasers at regular intervals, revealing nothing about the quadcopter, nonetheless. And indeed, the company has offered up an interesting product and one that, at $799, is at least somewhat more within the grasp of consumers than the company’s $5,000 Omni VR rig.

The fact that it folds up into a backpack is compelling. So, too is the removable three-axis Grip gimbal, which, if the company has any sense, will also be available as a standalone. Most compellingly of all, the drone is dead simple. I’m not an experienced drone pilot by any stretch of the imagination, but I had no trouble flying the thing in the strong mountain winds.

Once synced, the system literally takes off with the press of a button on the touchscreen attached to the company’s game-style control. Two sticks control the drone’s direction and altitude and a wheel on the side adjusts the direction of the camera, as a live feed displays hi-res on the small screen. I could see users navigating entirely by the imagery gathered by the on-board Hero, but first time nerves got the better of me and I ended up watching the drone in hover in the sky. 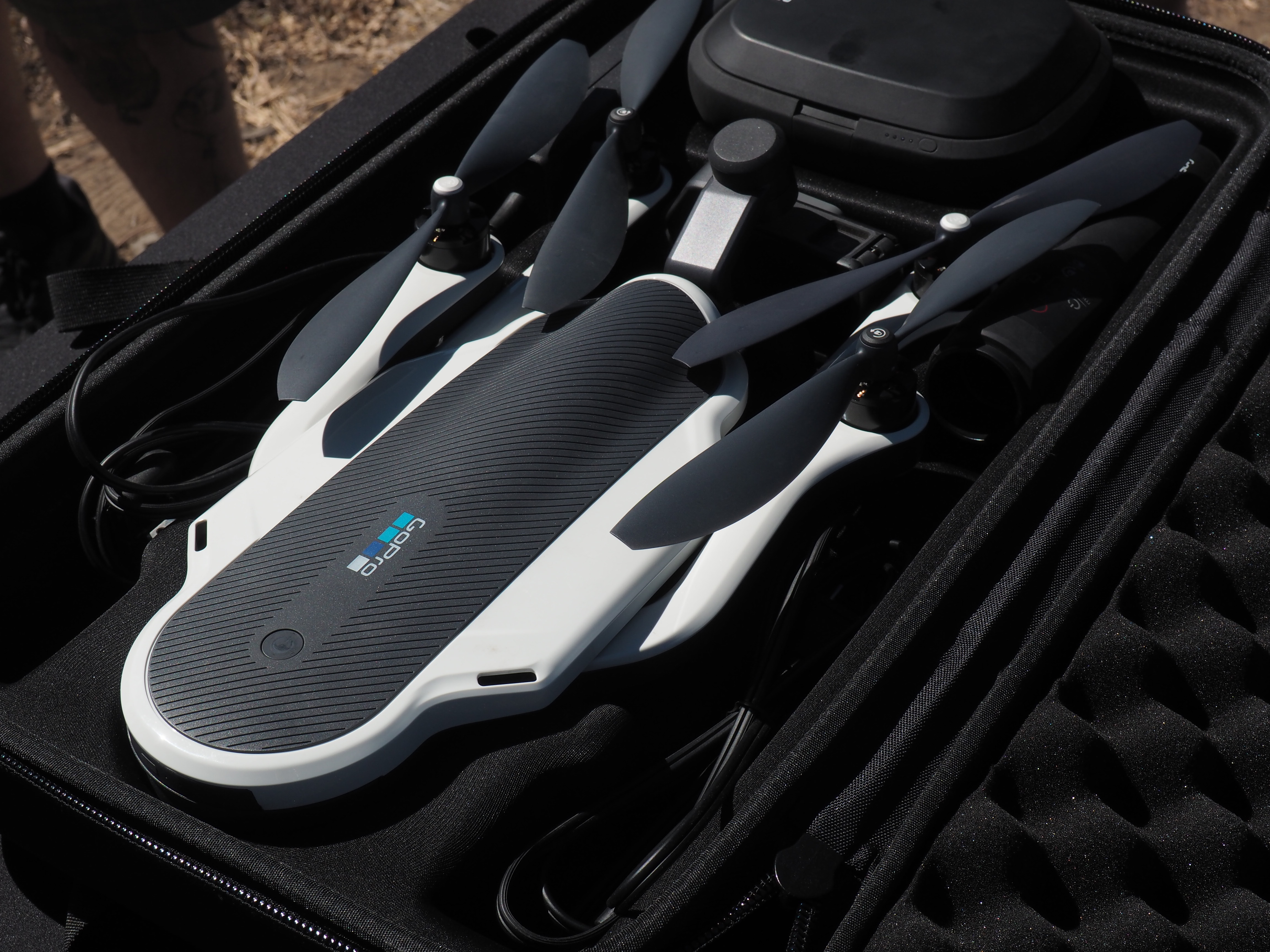 When it’s time to land, another press of the screen will bring it back – though our GoPro rep did end up finessing the landing manually, due, he said, to the high winds in the area. The landing pad, I’m told was too small for such a precious landing. I suspect that mostly, however, the company didn’t want to risk the drone tumbling down a mountain in such an environmentally volatile spot, flanked by members of the international media.

Even after such a long wait, a few key features do feel notably absent, including, most prominently, the ability to track a subject – which seems like a main selling point of selling a drone to action sports enthusiasts. I spoke to a rep during the event who told me, at the very least, it’s somewhere on the product roadmap. According to Woodman, the feature, as it currently exists, just isn’t good enough to make it onto a GoPro product.

“We made a decision to focus on other features,” he tells the audience, wrapping up his end of day Q&A. “We don’t think those technologies are at a place to where what the customer expects. We want to exceed customer expectation and not lead them astray.” 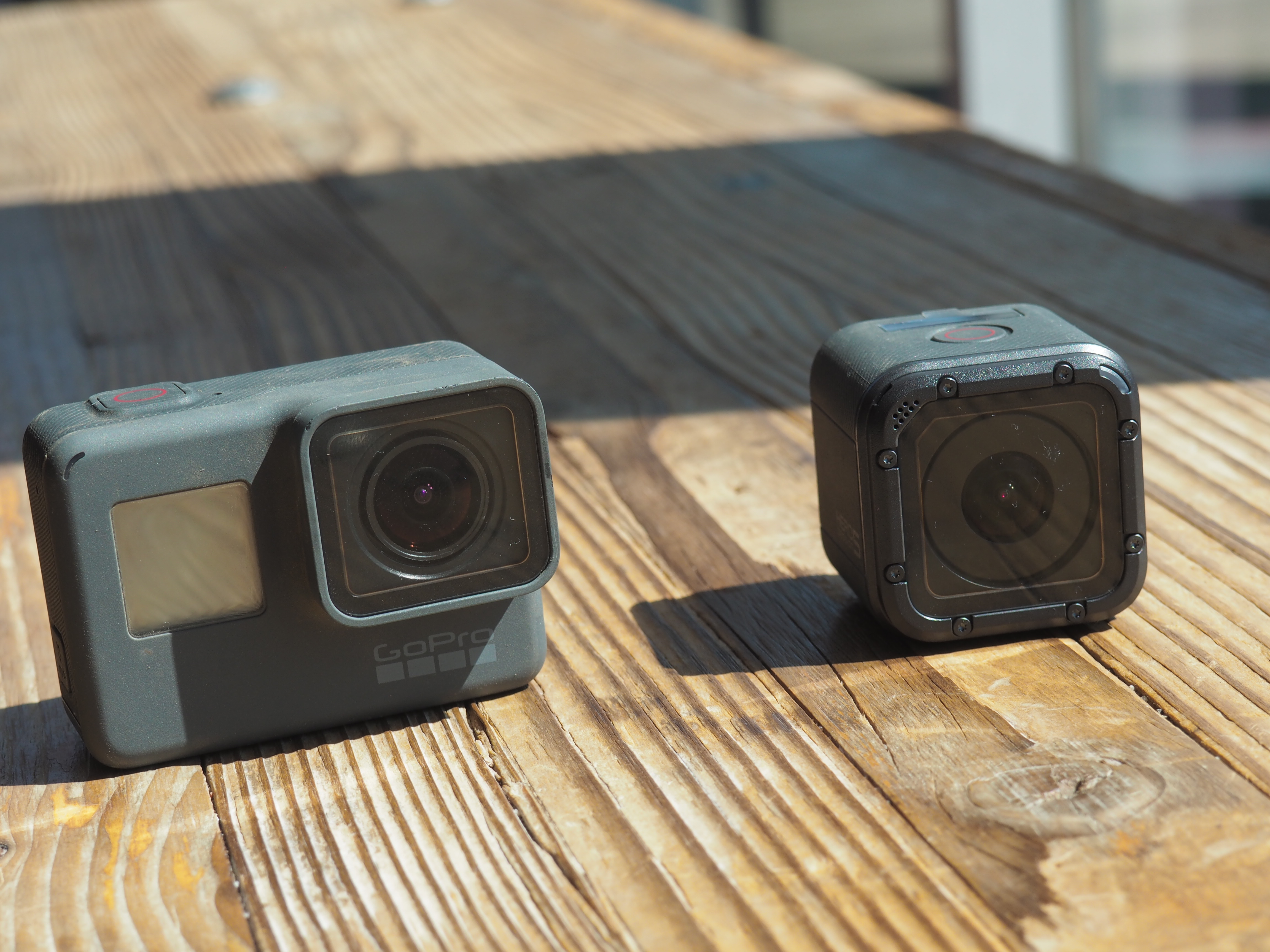 It’s hard to say, then, precisely who the Karma is for at present. It’s undoubtedly a compelling product, but as the company will readily admit, drones are far from mainstream. Perhaps the company will be able to sneak them in through some sport enthusiast back door, the way FitBits and GoPros eventually trickled their way down into becoming mainstream.

In his talk, Woodman insists time and again that, “Our goal is to help people become great storytellers.” The Karma certainly marks the beginning of a new chapter for the company, but one also gets the distinct impression that GoPro is having a little trouble completely turning the page.