Canva, a design platform for web and mobile that gives anyone the ability to make professional graphics, without needing an advanced skill set, today announced a new infusion of $15 million in funding and a doubling of its valuation in 12 months. Previously valued at $165 million, the added capital brings Canva’s valuation up to $345 million, the company says.

Canva closed on its Series A of $15 million last fall, and tells us that it hasn’t spent any from that previous round, thanks to its revenues from its business platform. Instead, this seems to be more of a case of raising the funds while you can, because you can.

The new round was led by prior investors Australia’s Blackbird Ventures and Silicon Valley’s Felicis Ventures. Canva has now raised a total of $42 million.

Explains Canva co-founder and CEO Melanie Perkins, “we were in a fortunate position where we didn’t need to take on any additional capital. That meant that we have been able to choose the investors we want to work with and to ensure that we set Canva up for long-term success,” she says. “We have so much left to do as a company, so it’s great to be able to have the resources to quadruple down on all of our plans.”

Specifically, Perkins says Canva wants to focus on product developments and growth, over the next 12 to 18 months. The company recently launched in another 11 languages and debuted an iPhone application that’s been downloaded 500,000 times.

Canva is also growing its team, having added six people this week alone, notes Perkins. In total, there is now a staff of over 120 across Sydney, San Francisco, and Manila. 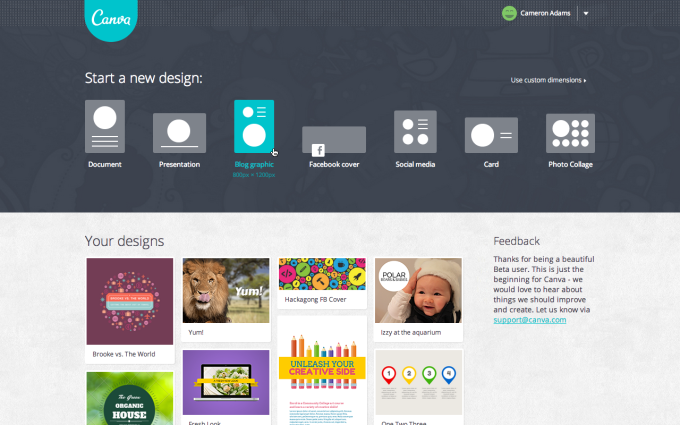 The tool is especially appealing to businesses in an age where so much of the content that needs to be produced is visual, and people are more comfortable using online services instead of desktop software to do their work.

“Many of the workplace tools that have become staples over the last couple of decades no longer satisfy the needs of today’s workforce. They were developed before the internet was born and their core concepts remain the same today,” says Perkins. “We have had the opportunity to reimagine productivity tools from the ground up to cater to what everyone needs today,” she adds.

Via Canva’s online dashboard or mobile app, users can design almost anything, from business cards to posters, to presentations to graphics to be shared on social media sites, like Facebook or Instagram.

Now the team wants to expand Canva’s capabilities. The company says it will launch a suite of rich media tools, as well as expand its presentation offering, and will debut deeper text-editing and collaboration features, like commenting.

To date, over 100 million designs have been created on Canva, and Perkins says five designs are now being created on the service every second. The software is now used by over 10 million customers.

Canva’s growth is also a reflection of the increased importance of design in our connected era where so much of the content we produce is meant to be shared.

“Until now I think that graphic design has been considered a ‘niche’ market,” explains Perkins. “However, the reality is that almost every single profession now has to create a lot more visual content and hopefully we can become the platform that powers the modern workforce,” she says.