Most startups toil away in stealth mode on new products and services with an Apple-esque fear of news leaks.

Peak Design decided to go to the other extreme, building a company in full view of its audience — and in the face of its competitors. Because they eschewed traditional investors in favor of a series of Kickstarter campaigns, I decided to take a closer look at how the team makes it work.

There are a few companies that have built successful businesses around repeat Kickstarter performances. Pebble, for example, has come a long way from its original $10 million Kickstarter campaign. Between it, Pebble Time and its Pebble 2 campaign, the company made $43 million worth of sales from the platform.

Peak Design feels different from the other Kickstarter Most Funded alumni. One of the biggest differences from its peers is that the company has chosen not to take external investment — and not for lack of offers.

“I feel that if we take external investment, we would be letting the backers down to a degree,” says Peter Dering, the company’s founder. When pressed, he won’t say that the company won’t ever take investment, but the status quo is that he still owns 100 percent of the company, but that doesn’t seem to matter as much to him. The customers, though, that’s a different story. “It would be a bitter pill to swallow for some of our earliest backers. There are people who genuinely care and who know how special it is not to have investors.” 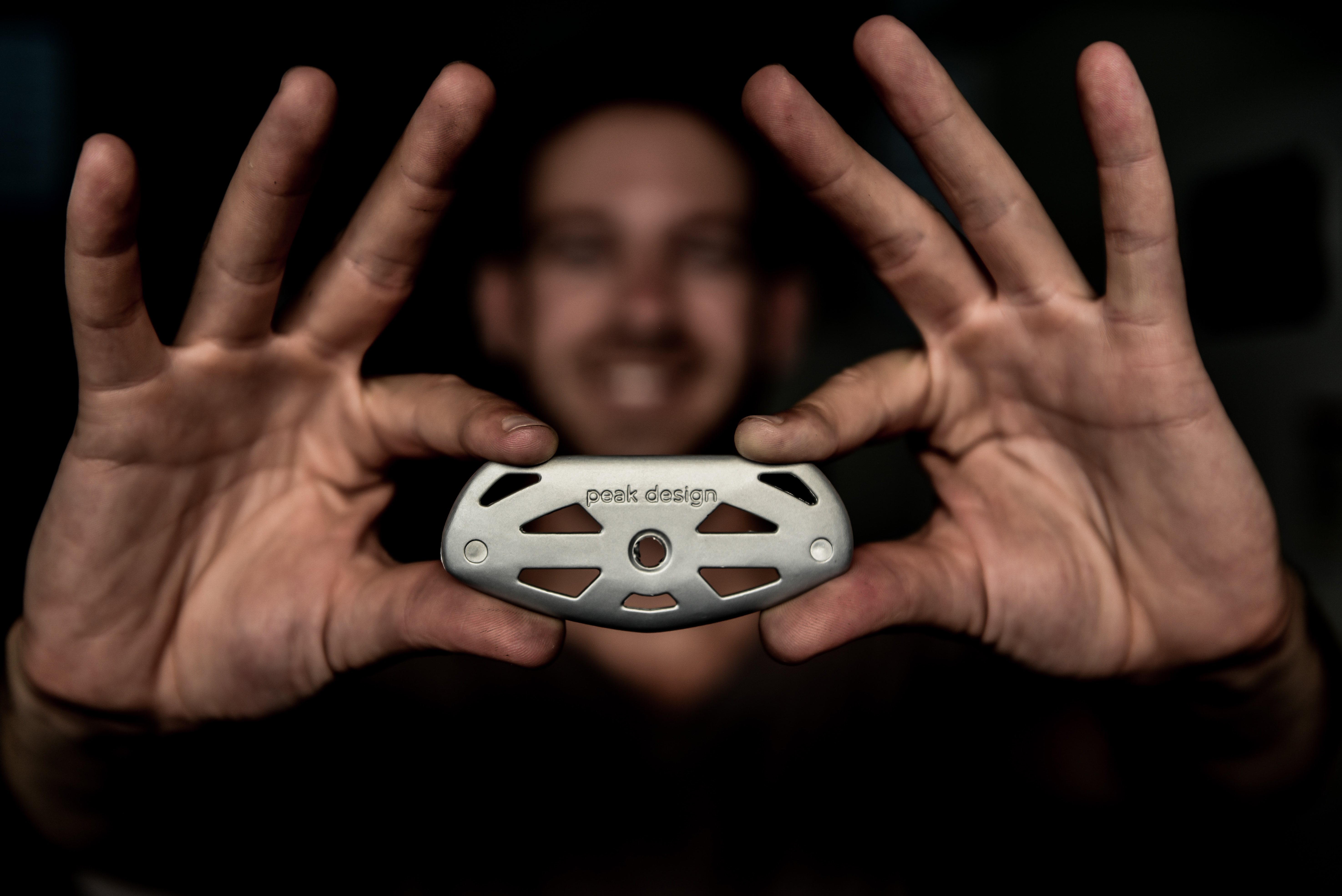 Peter Dering, founder of Peak Design, with a mold for the company’s Capture Pro product. You’d have thought a photography equipment manufacturer could get a photo of its founder in focus, eh?

The original Capture Clip was where Peak Design’s story began.

It started with a clip

The story of Peak Design started when Dering was traveling. Wanting to have his camera available at all times, he was securing his camera to a strap on his backpack using a carabiner. It worked, but wasn’t ideal, and it got him thinking… shouldn’t there be a better way of carrying around a camera?

The idea of having a camera tripod-compatible carrying clip came up, but there was a problem…

“I spent six months designing the first prototype, made out of wood. My problem was that I didn’t know anyone who had brought a product to market before,” Dering says, admitting that he made things up as he went along.

“My breakthrough happened when I was traveling cross-country from California to New York. I was on a hike and met Dave Stoltz, who works as a machinist,” Dering tells me. The two got to talking, and — long story short — before long, Dering had his first metal prototype. “It just worked. It worked so much better than I could have ever dreamed of.”

With the first metal prototype done, a lot of the heavy lifting was done, but the product still needed to find a way to market somehow. Which was when a second coincidence struck home.

“The TikTok+LunaTik campaign raised just under a million dollars around the time that I was trying to figure out how to get the Capture Clip to market,” Dering says, referring to the late 2010 Kickstarter campaign for a product that turns an iPod Nano into a wearable. “It really moved the needle; three people told me about the campaign in the same week. It made me realize that Kickstarter was the missing piece of the puzzle.”

“I can’t really look at the video anymore,” Dering laughs. “I made it in Windows MovieMaker 7… Let’s just say we’ve come a long way since then.” 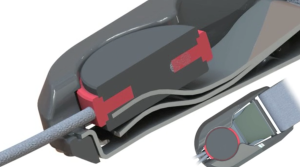 When the idea came to do the second campaign, for the company’s second set of products, the Leash and Cuff, Peak Design’s team faced an interesting challenge.

At the time, Dering felt the platform was firmly focused on independents, dreamers and people who wanted to create something new. It wasn’t clear whether it would it be okay to do a second Kickstarter campaign.

“We reached out to Kickstarter for guidance,” says Dering, “but they made it clear they didn’t want to talk to us about that. Nobody was willing to give us a definitive ‘yes,’ but on the other hand, they didn’t give us a definitive ‘no’ either. We were very hesitant to do the second campaign, but in the end we decided to go for it and see what happens. Kickstarter represented half of our revenue up to this point. It was 10 times more potent than any of our other selling techniques, and we needed the Kickstarter crowd’s help to get the product to market.”

“The first campaign had everyone jumping up and down, cheering us on,” Dering explains. “We didn’t want to get accused of abusing the system.”

From the campaign’s video, it’s obvious that even as the campaign went live, the company had second thoughts about whether it was the right thing to do. A full 20 percent of the Kickstarter video was dedicated to explaining why the company returned to Kickstarter a second time.

The team needn’t have worried. Although it wasn’t as successful as its first campaign, the Leash and Cuff still raised a respectable chunk of cash in only 22 days — much shorter than its original 75-day campaign –with $216,000 pledged from more than 3,100 backers. Having found a successful formula, Dering slowly started hiring a team and continued running one Kickstarter campaign per year. 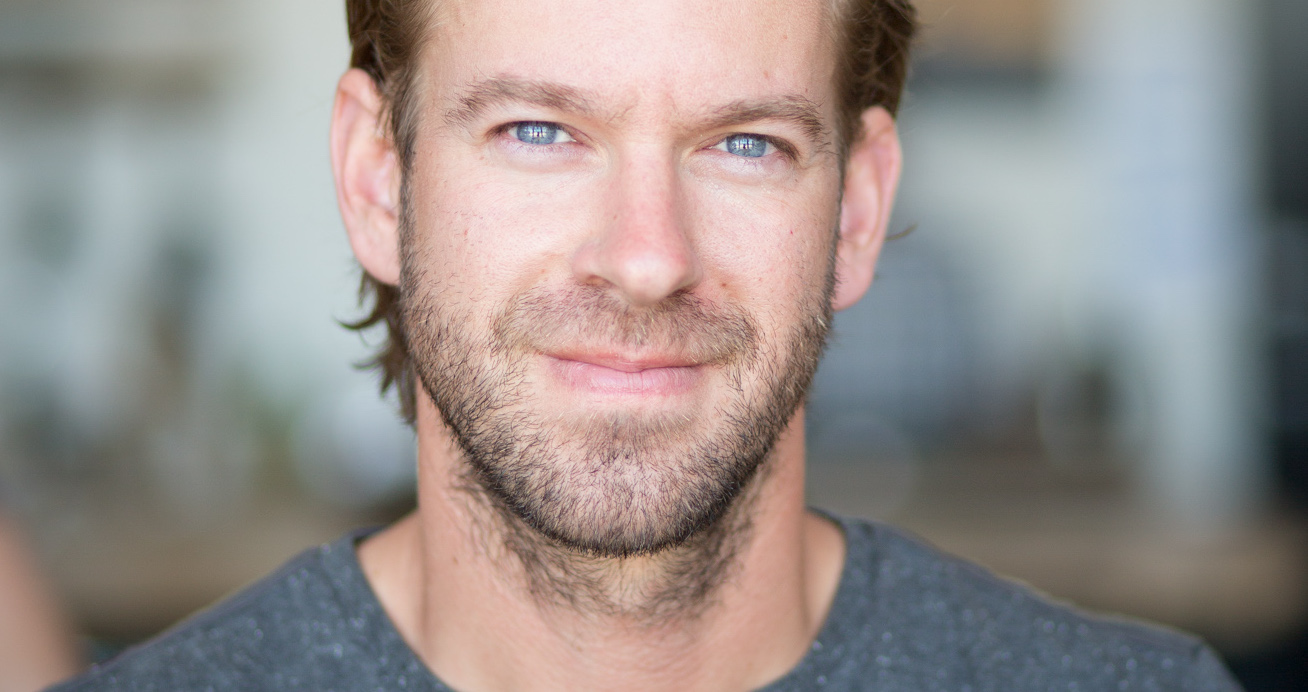 Peter Dering. In focus, this time.

Over its Kickstarter campaigns, Peak Design found its stride, and continued launching better and better photography equipment. An updated version of the company’s original Capture product, the Capture Clip v2, saw $820,000 pledged, while its camera strap and hand-grip product raised $860,000 worth of pre-orders from the crowd.

The company’s previous campaign — its fifth — seemed to really hit the sweet spot, with a camera bag designed to also be good for non-photographers, which netted the company a cool $4.9 million from more than 17,000 backers. 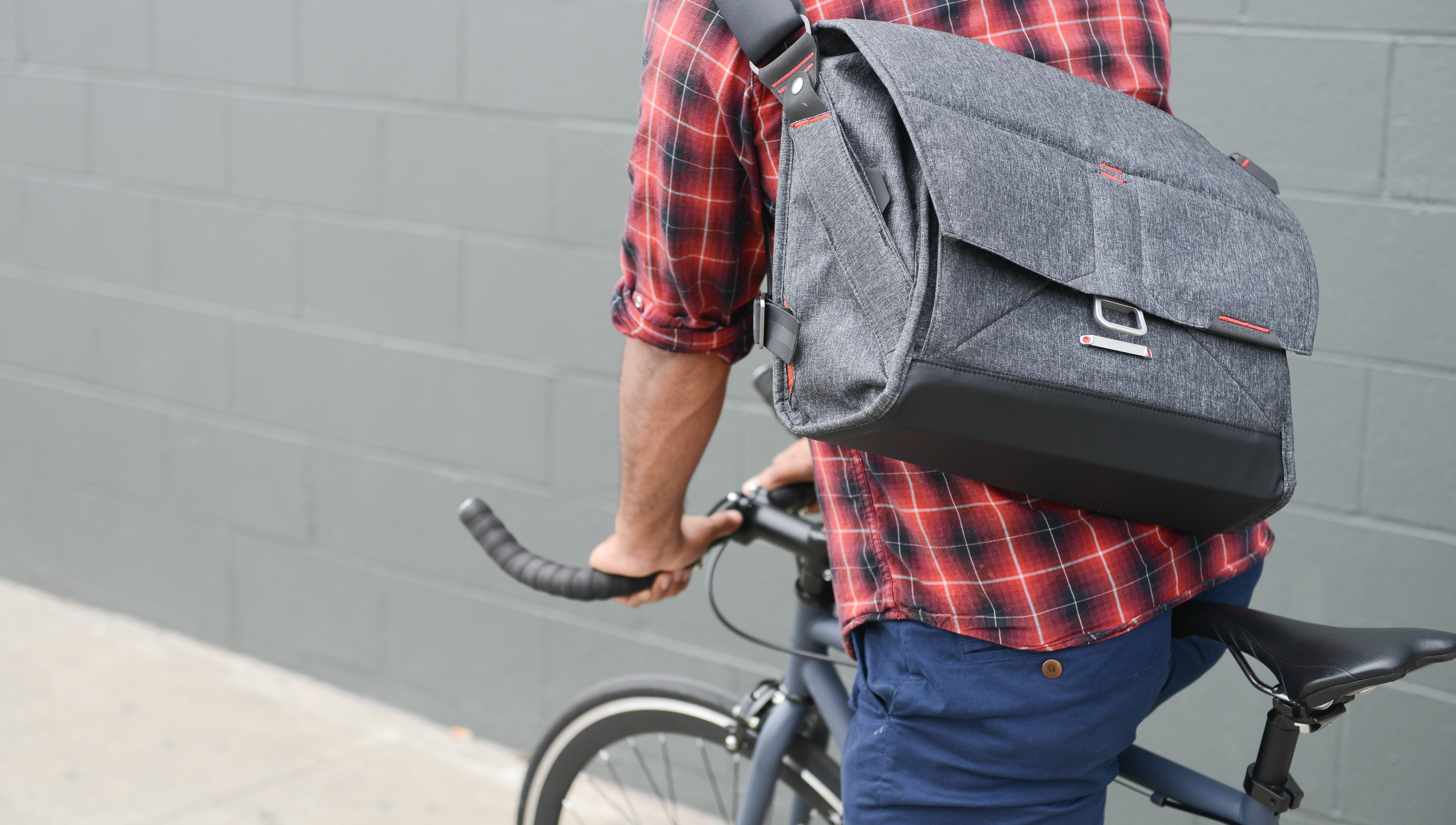 This was the Kickstarter campaign that smashed all of Peak Design’s previous records, collecting nearly $5 million from more than 17,000 backers.

“What made the bag successful was a range of different things,” the company’s marketing boss Adam Saraceno told me. “First of all, the bag that we make has to have some very photography-specific functionality, including the dividers and the quick access points. But, almost as importantly, it is not just a camera bag —  and that was intentional. We call it the Everyday Messenger bag for a reason: We designed and marketed it around more than just the needs of a photographer.” 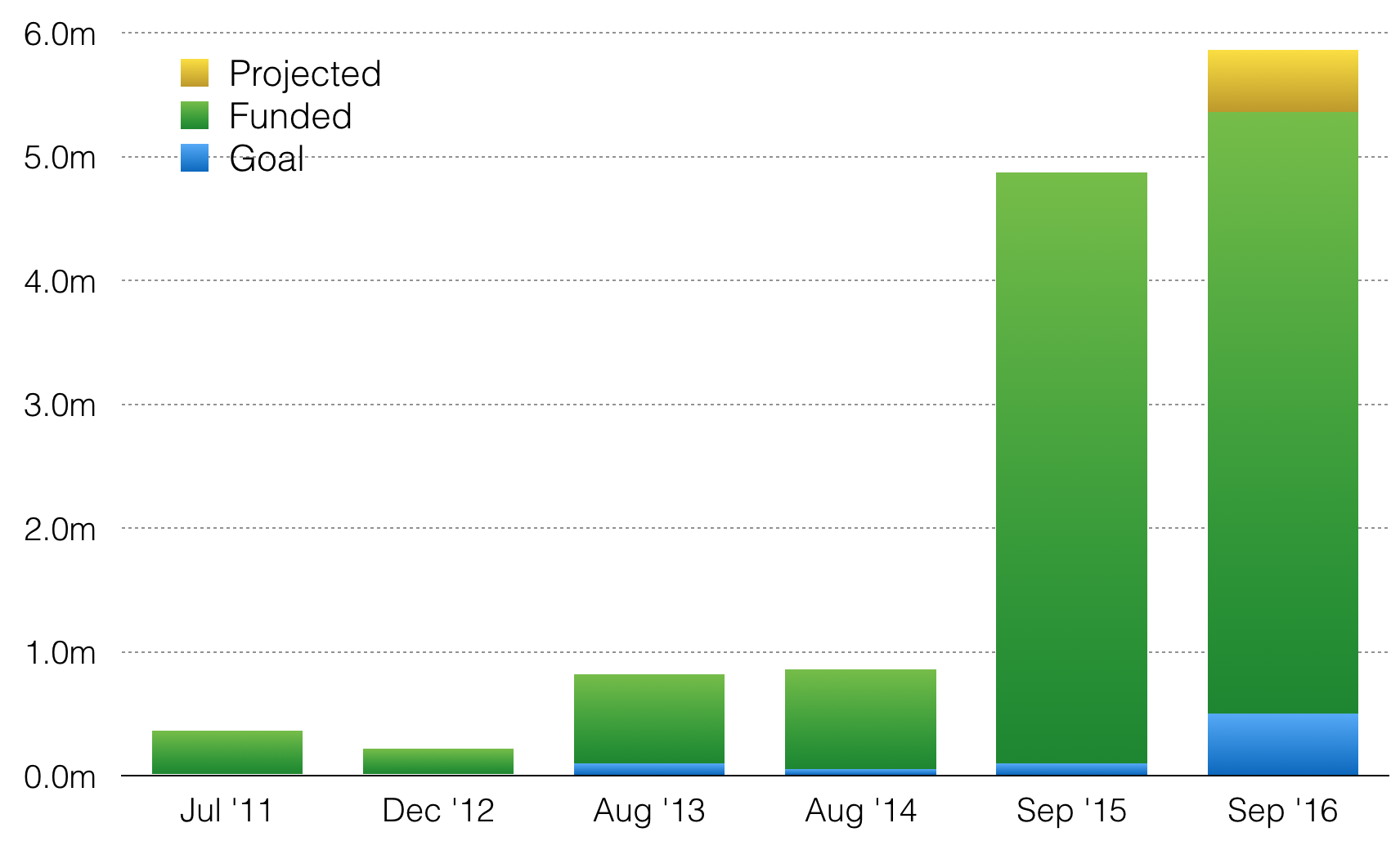 The first two campaigns raised around $200k. The next two clocked in around the $750k mark. And then things started going a bit silly.

“The plan was never to make just photography equipment,” Peter Dering explained to me. “I called the company Peak Design because I wanted something with the same initials as my name. P and D. There’s no ‘photography’ in the name, and that is intentional.”

For its most recent trick in the form of a trio of bag products called the Everyday Backpack, Tote and Sling, the company returned to Kickstarter, of course. As I’m writing this, the company’s campaign is well over 10 times above its half-million-dollar goal. 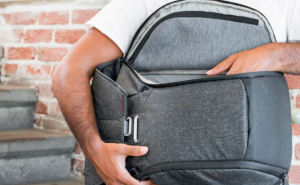 Peak Design’s new Everyday Backpack is undeniably a ridiculously cleverly designed backpack. With a suggested retail price of $260, it had better be pretty special, too.

Dering showed me prototypes of the bags and I can see why people are excited about them. Well, all of them except the tote bag. I guess I never really saw the point of a tote bag, but then, what do I know. The company has sold almost 1,800 of them as part of its Kickstarter campaign, netting a healthy $261,000 from that product alone.

So, how does the company deal with operating in full view of its customers, competitors and distributors?

“It’s a choice we’ve made,” says Dering. “If we didn’t want to do Kickstarter campaigns, we’d have to raise money from somewhere. I’m not a control freak, but I don’t see what would be gained from giving up our freedom.”

Dering is still the company’s sole founder, and owns every single share of the company.

“I have given around 28 percent of the company to our staff as a ‘phantom stock.’ It doesn’t mean they own part of the company, but they do share in the profits,” Dering explains. “I pay myself a salary that’s big enough to pay for food, rent and my life. If I exceed that and want to pay myself more money out of the company’s profits, I pay it out as a dividend.”

Peak Design’s current Kickstarter campaign has raised more than $5 million and is gunning for the $6 million mark.

“I call it a fairness doctrine,” Dering explains. “I live a super happy, easy, stress-free life. I want to extend that to my employees. In the meantime, when we’re all in this together, I like to be at the front lines.”

I find it intriguing that Peak Design has decided to plot a different path for itself. Like so many of the other startups I write about here on TechCrunch, Peak Design’s headquarters are in San Francisco. Unlike most of the other companies, Dering & Co. have few aspirations to chase valuations and unicorn status.

“No amount of money can replace this company. I feel like we are a big family. It feels like we are in it together, all winning,” Dering says. Then, pensively he adds, “I’ve had some shitty jobs in my time. With Peak, we’re optimizing for creating awesome products and optimizing for happiness.”

Optimizing for happiness means optimizing for humor, laughter and feeling comfortable enough to be silly. I’ve seen that in action whenever I’ve run into the Peak Design gang at trade shows. For example, the time I came to the company’s booth and saw it covered in black plastic garbage bags, with its products taped to the sides of the booth. 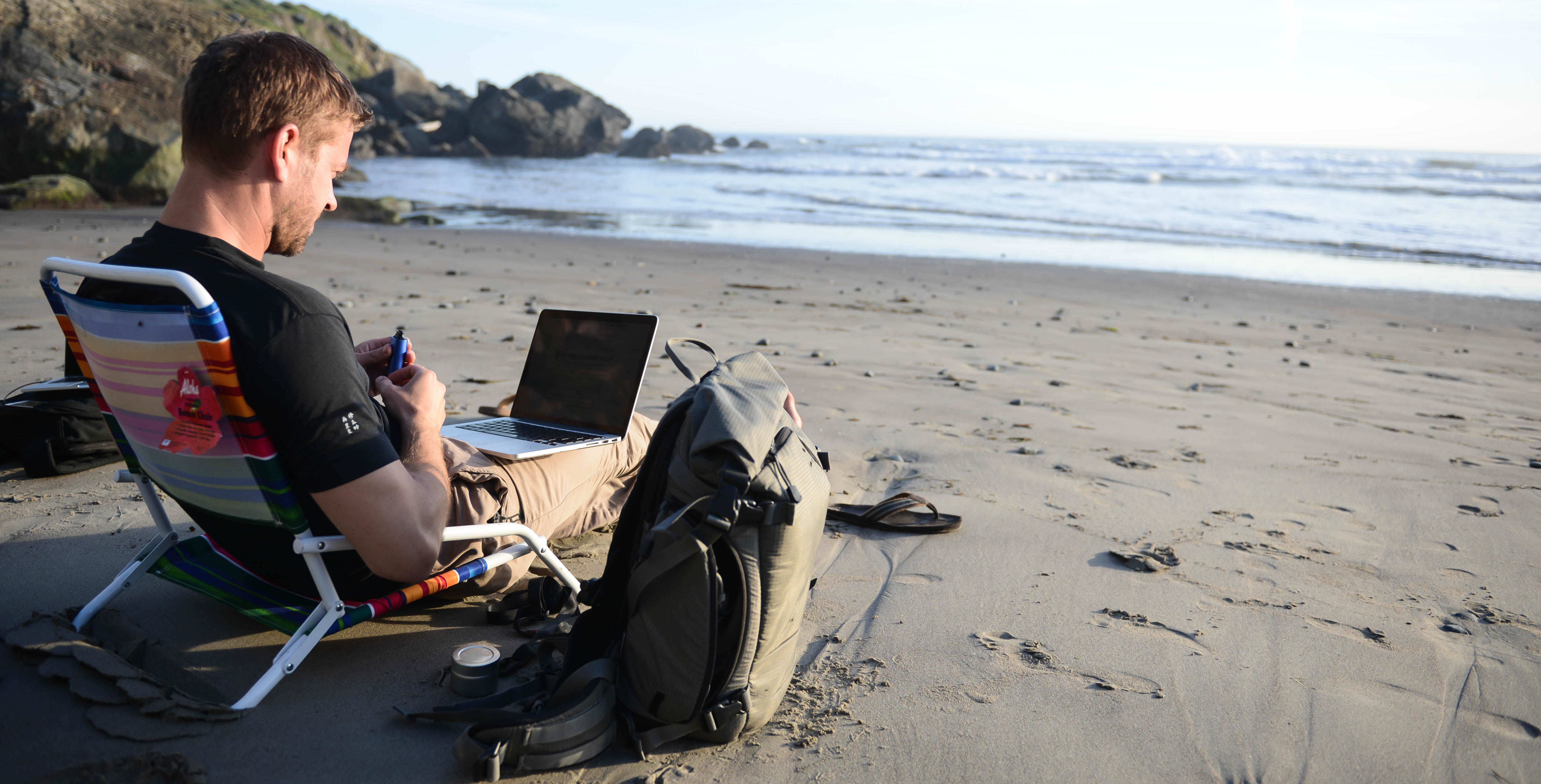 “The airline lost our fucking luggage,” Saraceno grumbled as I pointed at the booth behind him with a questioning shrug. “Luckily our distributor had some of our stock handy and our booth looks pretty cool like this, too.”

“I can’t over-emphasize the importance of hiring genuinely funny people,” Dering told me, before launching into a couple of unprintable anecdotes. He concluded: “We have some funny motherfuckers at Peak Design.”

No two companies are the same, but I can’t help but feel that Peak Design is a bit less the same than many of the others I’ve run into. As long as the team is able to keep their sense of humor about them, I expect them back on Kickstarter again next year. As for the company’s product?

“Hey, let me get the current campaign out of the way first,” Dering retorts, refusing to even hint at what might be next. “I do have 22,000 new backers to look after before we worry about our next campaign.”