It may not seem it, but coming up with an idea for your startup is probably the easiest part of launching your own company. As one industry insider told me, there are a million ways to screw up that idea through poor execution, and many, many lose their way. Yet a precious few fight through the problems and the challenges, and somehow, with a bit of luck and a lot of moxie, make it to IPO.

The four original founders of Box, one of those companies that made it through that long journey, talked about their experience in a panel discussion this week at BoxWorks.

While CEO Aaron Levie and CFO Dylan Smith have long been the public faces of Box, there were two others — Jeff Queisser, chief systems architect and Sam Ghods, services architect — all childhood friends in Seattle, who quit college to follow the startup dream.

The group seemed destined to launch some sort of startup, and often bounced ideas off one another, even after they went their separate ways to college. After Levie came up with the idea of what would be Box as part of a marketing class, the group saw potential — at least Smith did. Ghods didn’t see the value right away, but eventually all four were on board and Box was born.

These guys were living a Silicon Valley cliché in the early days, giving birth to their idea in a dorm room, then quitting school and renting out a converted garage that acted as their office and living space. You have to remember, these were four young men in their early twenties with no business experience whatsoever, yet they fell into their roles, as Levie with some marketing classes would be CEO, Smith with his financial sensibilities became CFO, Ghods with some coding background headed up engineering and Queisser, who had spent summers installing cable modems, became the de facto head of IT. 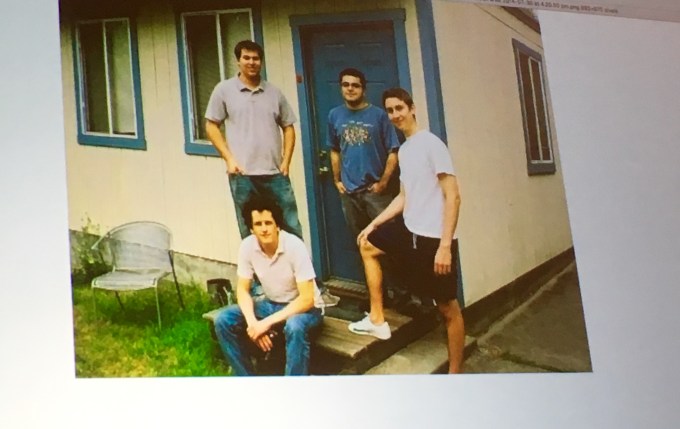 Box’s four founders around 2005 outside their converted garage apartment/headquarters.

The core group soon began selling Box subscriptions and were making a little bit of money. They even found an early backer at DFJ, who gave them some initial funding and helped form their fledgling board of directors.

Moving beyond the core group

One of the first inflection points for any startup is when you move beyond the core group of founders and begin to look for additional employees. The core group has passion, and in the case of Box, were four guys who had grown up together, further complicating the hiring dynamic — but as with everything, they had some luck in the deal (and they have some advice for those starting on that journey now).

The core team knew they were looking for a good cultural fit, but they were warned don’t get people who have the same exact skills and think just the way you do because you just get an echo chamber. Early on, any startup needs people who can cover a lot of jobs. When you get a little bigger, specialization begins to take over.

Even if they weren’t quite sure what they were looking for, they had a sense. They definitely had a “no asshole” rule and they needed someone they would be comfortable brainstorming with in a small room for hours. They lucked out when they brought in Karen Appleton as their eighth or ninth employee. She brought a level of professionalism and business experience the founders lacked, and she encouraged them to form partnerships.

“We were 19 or 20 years old. We didn’t know how it would work to hire more experienced people. Karen was the first of those hires and changed our hiring trajectory from cultural fit to cultural add,” Smith explained.

One thing that most startups do is pivot from the original idea, and Box was no exception. In about 2007, they began to recognize that consumer online storage was becoming increasingly specialized with Flickr handling photos and YouTube video. They didn’t think they could compete with that, and at the same time they began to recognize a need for a file-sharing product for business.

“I had a simple rule of thumb. Bet on whatever Steve Jobs is betting on. Box CEO Aaron Levie

There were a lot of heavy discussions about how to proceed. Eventually Box switched to the enterprise, but they didn’t make the transition willy-nilly. They actually went out and hired a consultant, who made some calls and gathered some data for them to confirm they were making a sound decision. You have to remember in 2007, the iPhone was just coming out and it wasn’t obvious that content and collaboration would move to the cloud. The consultant confirmed that some companies were thinking about this and there would be a business in that space.

There was still a lot of discussion among the founders, but they eventually all agreed it was the way to go — and it turned out to be a good decision.

A couple of years later, the iPad came out and this was a major turning point. “I had a simple rule of thumb. Bet on whatever Steve Jobs is betting on,” Levie joked. The company turned its attention to the iPad right away and was one of the first enterprise companies with an iPad app. It was then that they realized content management was changing in a big way and it was going to be about protecting content in motion.

The founders learned you need to compromise, and that was all part of the process. They also were voracious readers, and reading books like The Innovator’s Dilemma and Crossing the Chasm helped shape the company philosophy over time.

They all recommend getting mentors and learning as much as you can, because it’s tough going it on your own. You don’t know what you don’t know, and mentors who have been through the startup experience can help point you in the right direction — and they found when they asked, people generally wanted to help.

They also say there will be scary moments in the life of any company. They point to 2008 when they went looking for a Series B round in the middle of a huge economic crisis as one of those times.

There will also be tough times. You will definitely fight with your co-founders and you may question what you’re doing, but if you believe in the core mission, you can reach the goal of becoming a public company. It worked for Box — and it’s worth noting that the four founders remained close friends through it all.