A new application, Callblock, coming to the iTunes App Store, claims to block phone calls from over 2 million telemarketers by type, including things like robocallers, debt collectors, political campaigners, scammers, and more. To identify which calls should be blocked, the app uses a combination of public and private records, ongoing research, and user reports, the company explains. As new entries are added to the database, the app will automatically update to include the changes.

Callblock is the latest release from Rocketship, the bootstrapped and profitable app studio behind a popular mobile ad blocker called Adblock Fast, which today has 750,000 users and is rated 4.5 stars and 4 stars on the Apple App Store and Google Play. The new telemarketer-blocking app is seen as something of a sequel to Adblock Fast, as it also focuses on managing a large database, in an effort to protect end users from annoyances – in this case, unwanted calls, not frustrating online ads.

Using Callblock is a lot like using a mobile ad blocker on iOS. However, instead of going into Safari’s Settings, you head into Settings –> Phone, then toggle the Callblock switch on. In the app, you can then configure which type of calls you want to block, by checking or unchecking its series of rules. 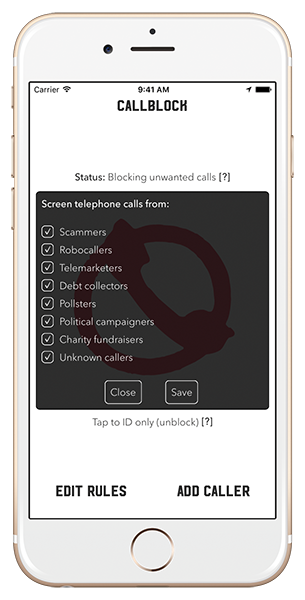 However, be aware that enabling the app or making changes in the app takes 15 seconds to a minute (depending on your iPhone’s chipset) to either load, reload or take effect.

The app takes advantage of the new CallKit API introduced at WWDC earlier this year, which allows third-party apps to integrate tightly with the native Phone user interface. 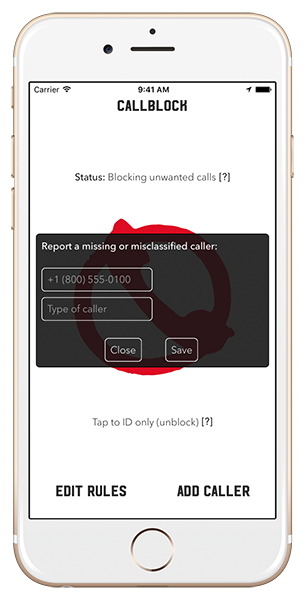 At launch, Callblock can screen calls from scammers, debt collectors, robocallers, telemarketers, pollsters, political campaigners, charity fundraisers and unknown callers. If a call gets through that should have been blocked, you can report the phone number in the app, too, by tapping “Add Caller.” (You can also correct misclassified numbers.)

This is not the first app to help users handle incoming spam calls – apps like Mr. Number and Truecaller do this as well. However, while those apps do things like showing you who’s calling, have you report spam and create personal blacklists, third-party apps were not able to actually directly block incoming calls themselves until iOS 10. Callblock will be among the first to launch with this new capability.

But if you’d prefer, the app allows you to callerID incoming calls instead of blocking them by default. 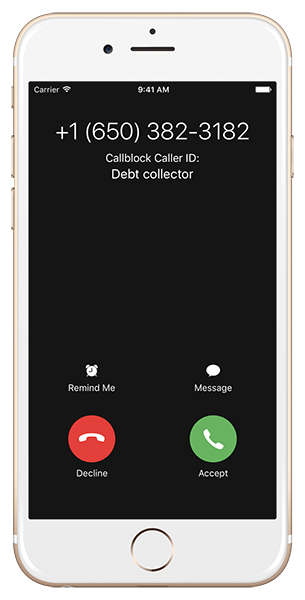 According to consumer group Private Citizen, telemarketers make 148 million calls per day – which is why something like Callblock will be welcomed. The new app currently works in 174 countries worldwide, and is launching alongside the release of iOS 10.

In the meantime, users can request early access to the mobile application here, or subscribe to be notified when it comes to other platforms, like Android. The app will eventually offer subscriptions ($0.99/month or $9.99/year) but may feature a one-time promo price as part of its public launch.