You sensed it was coming. Not only do Samsung, Apple and others offers such services, but Xiaomi has outfitted its devices with fingerprint scanners and had a ‘wallet’ app, too, making its foray into payments seem inevitable.

The phone maker has tapped UnionPay, the Visa-like payment firm that dominates China, and said that its Mi Pay service launches with support for debit and credit cards from 20 domestic banks, including Bank of China. In addition, Mi Pay — which is powered by NFC — can be used for public transportation trips across six cities in China. Last week, Bloomberg reported that Apple plans to allow public transit payments in Japan this year.

It looks Xiaomi is betting that Mi Pay can help increase revenue, and potentially lock existing Xiaomi users into its ecosystem more tightly so that, when times comes to replace their current phone, they are more inclined to purchase another Xiaomi device.

Initially though, the service looks limited. It is only available in China, and will only work with one current device: the Xiaomi Mi 5.

Mi Pay can hold up to eight cards per user, and it operates much like Apple Pay for initial setup and usage. 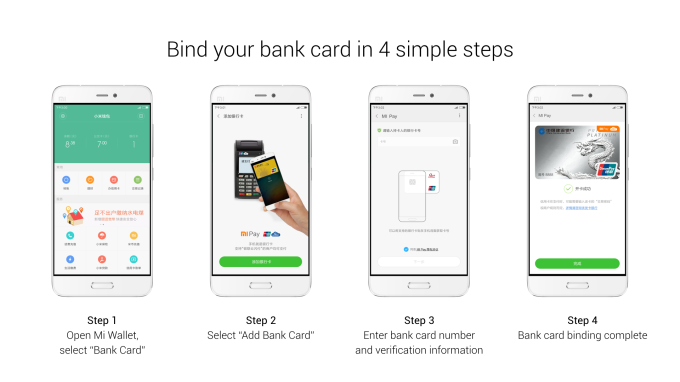 “After cooperating with China UnionPay over the past three years, Xiaomi is now truly excited about our joint partnership to launch Mi Pay. We believe that Mi Pay will be a key driving force in promoting the development of China’s mobile payments industry, and deliver much more convenience to our users,” Xiaomi CEO Lei Jun said in a canned comment.

Xiaomi’s entry into payments comes at a time of uncertainty around the company’s business. While it doubled its sales to more than 70 million in 2015, Xiaomi fell some way short of its target of 100 million for the year. More worryingly, Fortuned reported that revenue last year remained flat.

Increased competition in China this year, saw Xiaomi dethroned as the country’s top phone vendor while it has disputed data appearing to show falling sales. Outside of China, Xiaomi seems to have performed well in India, but it has to contend with fierce competition in that market. It isn’t clear how the company has performed in other places where it sells phones, which include Brazil and Indonesia, while its maiden U.S. release — an Android-powered set top box — is yet to go on sale. It doesn’t look like it will sell smartphones Stateside for some while, despite beefing up on patents.

Beyond smartphones, its plan for a connected home of affordable ‘Mi’-branded smart devices doesn’t appear to have borne fruit yet, despite an eclectic array that spans a $250 robot hoover (announced this week), a drone, a Macbook-like laptop, a smart rice cooker, a GoPro-style action camera, a scooter, and much, much more.

All this has begun to weigh on investors’ minds. The company was valued at $45 billion at the time of its last fundraising, $1.1 billion at the end of 2014, but the suggestion is that Xiaomi hasn’t kicked on as had been hoped. Nonetheless, it remains one of the most influential and ambitious mobile companies in the world.