Plex, a popular personal media player system that lets you stream from your own library, including music, photos, TV and movies, across devices, is today rolling out DVR functionality. The software will now allow you to watch and record their favorite programs, by pairing Plex with any digital antenna and an HDHomeRun digital tuner. This allows you to use Plex to watch TV on any device, including local news, sports, as well as content from the major networks, like ABC, NBC, CBS, FOX, CW, PBS and others.

This makes Plex a better solution for cord cutters, rather than being just software you use to stream your media library from a network-attached device, like your desktop, a NAS device, or the NVIDIA Shield Android TV, to another screen.

According to Nielsen, 86 of the top 100 most-watched shows in the U.S. this year are available over-the-air for free, the company notes about what this means in terms of expanded content. But if you’re not ready to cut ties with cable TV, you can still take advantage of the new TV-watching feature, Plex says, as it also supports non-DRM CableCARD channels on the HDHomeRun PRIME network-attached digital tuner.

In addition, you can expand your DVR’s capabilities by adding more tuners or adding more storage.

Plex’s update comes at a time that many people are moving away from pay TV subscriptions in favor of more affordable alternatives, like free over-the-air programming, combined with an on-demand service like Amazon or Netflix. For Plex, however, moving into TV streaming space seemed like the next step.

“We have actually always considered ourselves a part of the cord-cutting movement,” says Jason Williams, director of product and growth, Plex. “As a matter of fact, many of our users today are cord cutters, and we often find ourselves at the top of the list in essential apps for cord-cutter related blogs. DVR support was really just a natural evolution of the product.” 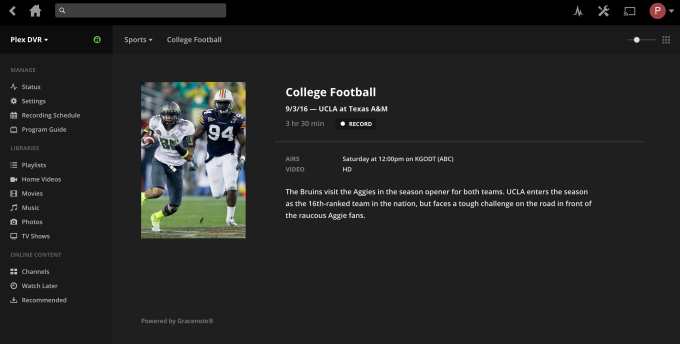 Once set up, Plex will organize your DVR recordings alongside your other media, including your music, videos, and photos. It will also automatically pull in information like movie posters, plot summaries, cover art, and descriptions. Recorded TV content will include show descriptions, episode synopses, and season information, which sees Plex easily rivaling other DVR platforms, like TiVo for example.

There are two main sections to the DVR – the program guide and recording schedule.

DVR users will be able to browse upcoming shows through a rich program guide that includes over-the-air channels like ABC, NBC, CBS, FOX, CW, PBS, CBC, BBC, ITV, Telemundo, Univision and others. The guide highlights content as “News,” “Sports,” “Premieres,” and “Upcoming Favorites,” to help you better find what you’re looking for. You can also click on “Discover” to sort shows by type, genre, rating, network or year.

The search box, meanwhile, lets you search for content by title, actor, director, music and more. 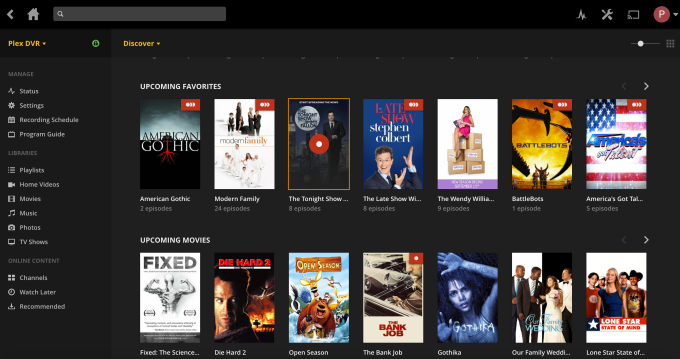 Plus, the guide is personalized, too – Plex will begin to recommend upcoming broadcast TV based on your viewing habits and what you have stored in your Plex library.

Meanwhile, the recording schedule screen lets you view your recordings as either an Agenda or Calendar view. You can rearrange your recording priorities, as well as view individual and season pass recordings. 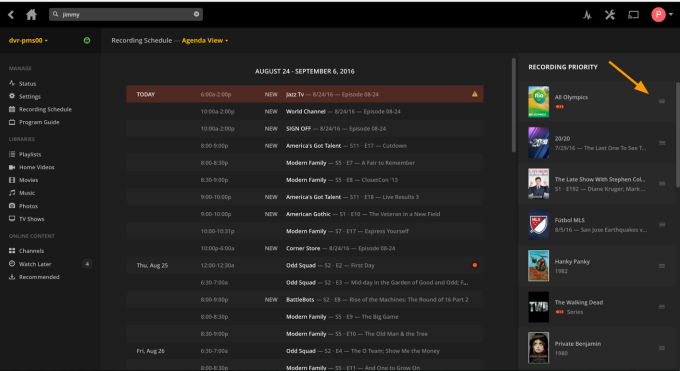 The Plex DVR is not going to be an additional add-on service, but is rather being bundled into Plex’s subscription product, Plex Pass, which is now $4.99 per month. (You can also choose to pay $39.99 per year or $149.99 for a lifetime subscription.) Plex Pass also includes other premium features like Mobile and Cloud Sync, Premium Music, full access to Plex apps, parental controls and more.

The DVR is available today in beta.