It may seem as simple as just that. An egg. The food that Atkins and Paleo diets made popular once again. The food that draws one of many dividing lines between vegetarians and vegans. But this particular egg is one of the more layered, even scrambled (if you will), symbols of Silicon Valley startup-dom.

It’s easy to dismiss the Yos of the tech world as outliers, but much harder to look at the overall impact of our tech darlings when it comes to the betterment of global society.

Blue Apron’s “Farm Egg” has me asking these questions. Is Uber creating a million jobs only to eventually take them away with self-driving cars? Is Tinder empowering a generation to meet someone in the digital age or creating a generation of promiscuous, lonely souls?

Or, more pointedly, is Blue Apron creating a shitload of waste in their quest to save the Convenience Generation from fully industrialized agriculture and obesity?

At first glance, “Farm Egg” appears to represent an extreme level of waste out of Blue Apron.

Compared to buying eggs by the half-dozen at the grocery store, the packaging of a single “Farm Egg” in excessive cardboard (most of which is likely for insulation against bumps and bruises during transportation) doesn’t appear to be all that “Eco-friendly.”

You can dive deeper into this thesis, and uncover the difficulty of recycling Blue Apron’s markedly (as in, it’s on the box) “Eco-Friendly” packaging.

After compiling all the cardboard and paper products, the process involves melting and emptying the plastic cool-packs that keep Blue Apron food fresh, and finding a place to recycle LDPE plastic bags (you can recycle LDPE at retail locations, like grocery stores). 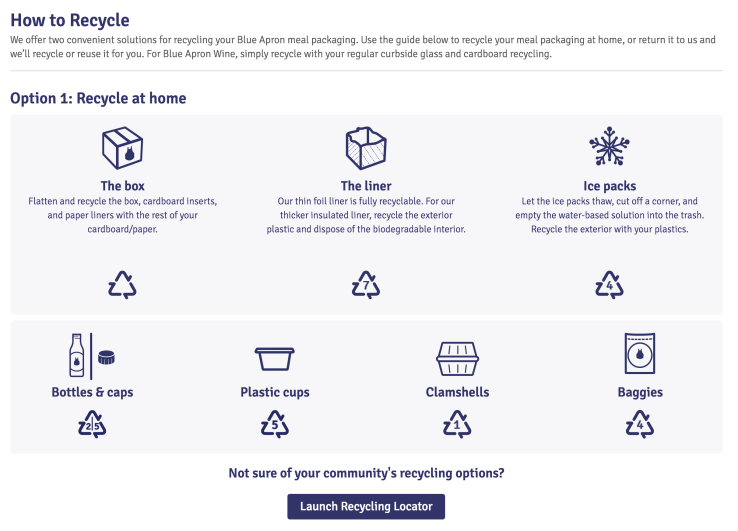 If you’re willing to do all that for the earth (which is totally likely since you’re also the kind of person who doesn’t have time to shop at the grocery store, and thus, a Blue Apron user), the final step in the recycling process is to make your peace with trashing the plastic film, which has “a limited recycling market once it comes in contact with food.”

That said, Blue Apron argues that its packaging waste has decreased by at least 50 percent since launch four years ago.

Plus, Blue Apron has launched a returns program for users to send back everything (the box, the cool-packs, the plastic and the paper) with a UPS return label, at which point the company will recycle the packaging for you.

“Literally, tons of packaging is returned to us each month for us to recycle,” said Salzberg.

For generosity’s sake, let’s just assume that each of Blue Apron’s 8 million monthly meals are properly and fully recycled. That still doesn’t account for the fact that some of those meals traveled miles and miles, likely in refrigerated trucks, from one of three Blue Apron fulfillment centers in the United States. 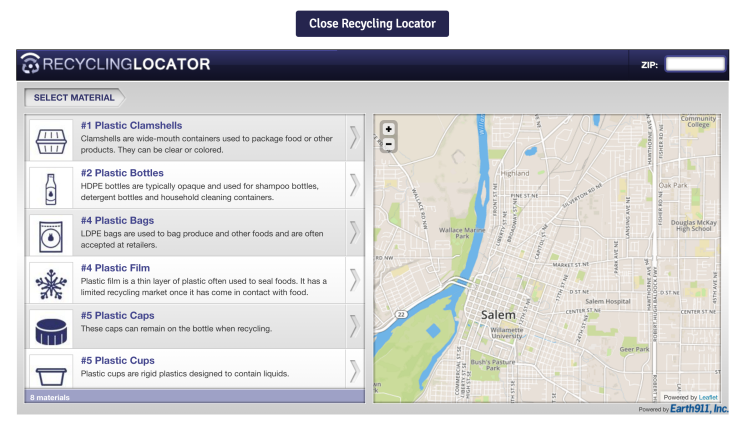 The company has one fulfillment center in New Jersey, which services the entire Eastern Seaboard, one in California, which services the West Coast, and one in Texas, which takes care of the fly-overs. For users in New York, California and Texas, that’s not all that bad in terms of emissions. But users who aren’t in populated areas, or in Southern Florida, are receiving food that has traveled hundreds of miles.

But is Blue Apron really the culprit when it comes to food transportation emissions? California avocados, Florida oranges and Wisconsin cheese don’t even scrape the surface of an industry where the vast majority of carbon emissions come from food production, not transportation.

And Blue Apron specifically selects suppliers that are within the general region of their fulfillment centers, sourcing food as locally as possible to reduce emissions.

Plus, for the fraction of emissions that come from food transportation — driving it to the store for retail, plus customers driving to and from the store to purchase it — Blue Apron’s exclusion of the grocery store middle man may even be more efficient.

Before arriving at the fulfillment center, where it’s prepped to be shipped — I can just imagine little “Farm Egg,” separated from its friends, slipping into that individualized, stickered cardboard holster before being placed in an insulated box — Blue Apron foods come from hundreds of hand-selected, family-run farms and suppliers.

That’s not so bad, either, considering how dangerous industrialized agriculture can be for the planet.

The company has a team of over 50 people who work to both select suppliers and help them improve their practices, ensuring that the minimum of pesticides are used and that agricultural farmers are taking good care of their soil.

And then you have to factor in how Blue Apron’s perfectly portioned meal-kits, complete with solo bacon and dear “Farm Egg,” must reduce food waste. Folks who buy food in bulk at the grocery store waste 31 percent of it, according to this USDA study. With Blue Apron portions, that number shrinks to almost nothing.

“Most industry experts will tell you that food waste, given all the resources that go into growing food, is ten times worse for the environment than packaging waste,” said Salzberg.

Not to mention, Blue Apron helps people cook. People who otherwise wouldn’t. Researchers at Johns Hopkins found that cooking actually leads to a much healthier diet.

Which begs the question: Is Blue Apron, and little “Farm Egg,” part of the problem or the solution?

It’s difficult to weigh the extreme (but mostly recyclable) waste of Blue Apron’s packaging with the general good it does for the nation’s food waste and its users’ health.

But we can be sure that Blue Apron, valued north of $2 billion and potentially gunning for an IPO, is as much a shipping company as it is a food startup, with a small team of employees focused entirely on boxes, plastic bags, ice packs, and… the delicate cardboard cradle for “Farm Egg.”

“Farm Egg” may just be another ridiculous, hilarious symbol of Silicon Valley’s disconnect with the world’s most pressing dilemmas. Maybe. “Farm Egg” may also be a truly fitting symbol for the way the tech world approaches global problems with a holistic perspective.

At first glance, “Farm Egg” seems like a joke, a step backward in our global progress, solving a problem that we don’t actually have — just go to the damn store and buy a half-dozen eggs, lazy bones!

But “Farm Egg” also represents an improvement to each of the pieces of the food industry. After traveling a short distance from a cage-free chicken farm to one of Blue Apron’s fulfillment centers, where it was dressed up in recyclable materials, Farm Egg eventually ended up at the home of a user, who cooked it up for dinner without wasting anything, and… hopefully, recycled the packaging afterwards.