A startup called Proxy has raised $1.6 million in seed funding to help people use internet-enabled devices of every kind without all the annoying login processes and standalone apps for each separate device.

Proxy’s cofounders Denis Mars and Simon Ratner said they were inspired to create their technology, in part, by the overwhelming number of IoT devices seen in recent years at industry trade shows from smart home appliances to building management systems.

“We wanted to be in a world where you could walk up to anything and start using it without having to sign in. We saw this explosion of devices and just thought, do I need an app for every bloody thing? There’s got to be a better way,” Mars said.

A better user experience was seen in the Disney MagicBand, the data-transmitting wrist band that allows guests at Disney World to get right to the rides, food and other “experiences” they pre-order, without paper tickets, long lines, or waiting to get a server’s or a cashier’s attention.

However, Proxy didn’t want to ask people to purchase yet another wearable, or change their behavior to take advantage of the internet of things. So they developed an app that turns smartphones, something most people already carry day and night in the U.S., into a kind of beacon.

With Proxy, a user’s smartphone emits a Bluetooth signal that gets picked up by a sensor connected to an IoT device, like an electronically locking door, for example, or a home entertainment system.

As the user approaches the IoT device, sensors in it will detect their presence and see if they have been granted access to the device by requesting an ID from Proxy.
Proxy’s backend system verifies their ID, and once the sensor confirms that the user is allowed, it’ll open the door, or fire up the user’s preferred sound and screen settings. 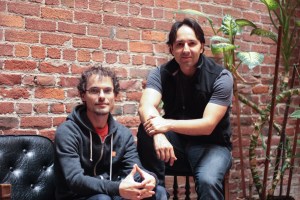 Proxy aims to make all of the verification happen in a few seconds so users can instantly open a door, or start listening to music they with the equalizer set exactly to their preferences.

For now, Proxy’s technology only works with the door locking systems used at offices, which normally require card keys. But the early-stage company has yet to expand it to work with other consumer electronics or building systems.

Twenty companies in the San Francisco Bay Area have already signed up to use Proxy with their employees said Mars and Ratner. Businesses like the fact that they can give new employees or guests access to their offices without calling landlords to arrange for new or temporary card keys, the founders said.

The startup will use some of its funding to make Proxy better-known, and to develop an API that will make the company’s app work well with others.

Proxy is part of the current batch of startups at the Y Combinator accelerator and was originally incorporated as Martians Inc. Its backers so far include Y Combinator and Blackbird Ventures.