In the sharing economy, who services the servicers?

In the case of Uber, your driver could soon be a machine — but there is a growing ecosystem that caters specifically to sharing economy services. One such example is GuestReady, a new company that wants to help Airbnb hosts manage their property more easily and efficiently.

London-based GuestReady officially opened its doors this week, launching its service in six cities: London, Paris, Amsterdam, Singapore, Kuala Lumpur, and Hong Kong. The idea is simple: provide all manner of services that an Airbnb host could need for management — be that cleaning, laundry, or check-in and out services.

“We think the sharing economy has seen incredible growth but to professionalize it there aren’t many companies out there to help,” GuestReady CEO Alexander Limpert told TechCrunch. “Staying at an Airbnb is always a great experience but sometimes it is not as professional as we’d like it to be. Sometimes it is the small things, like waiting for someone to let you in or an apartment that isn’t really that clean.”

“We want to be the underground hands and feet that can run the sharing economy machine,” he added. 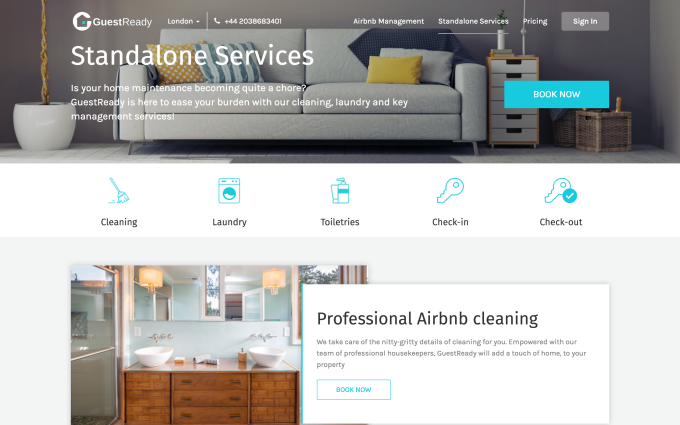 Limpert said that GuestReady is “focused” on Airbnb because it is the category leader, but also offers services to home owners using HomeAway, Booking.com and others.

The company has been quietly operating for a few months, with the goal of providing services within 48 hours of requests from hosts. For now, it is sticking to these launch markets to prove out its model first.

“The focus is on these six cities, which are all big cities with lots of tourists,” ex-Foodpanda executive Limpert said. “This is a business that needs on the ground operations, so we’re in a good position for the moment and have [no plans to expand until] we see we have good scale.”

The challenge for GuestReady even if it can attract attention from Airbnb hosts, is walking the fine line between having a large enough ‘fleet’ of workers to carry out jobs and being selective enough to only hire trustworthy individuals. After all, you can’t just hand anyone a person’s house key and ask them to front their business.

Limpert said the company has built its “freelancer” network using people with a background in hotels and hospitality. That isn’t just limited to students, although they are a group that tends to have the most flexible schedules and a keenness to earn money.

“We use thorough selection [methods] and keep our circle of workers tightly-knit,” he explained of GuestReady’s hiring. “This is not the type of business with lots of people involved because it involves trust, but we have a broad network and a company that can help us in peak times — but that’s rare.”

For now, GuestReady operates a web-based booking platform to manage requests and schedules. There are plans for mobile apps in the future, but that’ll take some time, the company said. To help it get going, the company — which is founded by a number of ex-Rocket Internet employees — raised an undisclosed round of funding from the Swiss Founders Fund.