WhatsApp may have over one billion active users each month but it continues to frustrate the many small businesses that rely on it for sales but suffer for its lack of advanced features.

Messaging services like Line, WeChat and even Facebook Messenger have become platforms that let business users get dedicated usernames and accounts, manage group chats, set up stores and use bots for communication, all while WhatsApp remains basic. The company only added a web-based interface last year, for example. Prior to that, businesses tapping into its popularity had to literally key in all updates on a phone. That doesn’t scale when dealing with hundreds of potential customers.

The problem is particularly acute in India, where WhatsApp is estimated to have over 100 million users. As the country’s most popular app, WhatsApp is unparalleled as a distribution channel for selling online or retaining customers, despite being largely ill-suited to the role. That’s where Meesho, a startup in Y Combinator’s latest batch, is hoping to change things and empower WhatsApp sellers.

The company is a ‘Shopify for mobile’ for India at the most basic level, Meesho co-founder Vidit Aatrey told me in an interview. Essentially, it adds commerce features to WhatsApp to allow businesses to engage with customers and sell product more efficiently.

“Small businesses in India use WhatsApp groups a lot, posting details of their products daily, and then using cash or bank transfer to collect payment” Aatrey explained.

“But the whole model has many challenges, especially for the buyer who can’t search, while the seller can’t categorize products. If you’re looking for a sari, for example, you need to keep scrolling through chats — but there are hundreds of photos [in a group] per day — customers are spammed to hell, photos get downloaded to their device so they need to clean their phone regularly, and there is no [formalized] way to collect payment.”

Given that Facebook, the company that owns WhatsApp, is testing social commerce solutions of its own, Meesho has identified a genuine problem here. 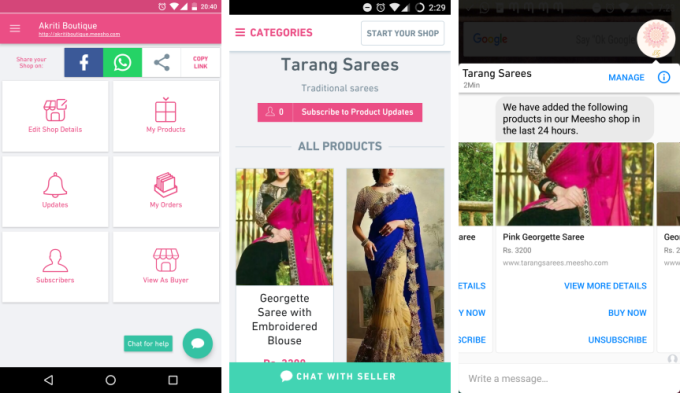 Meesho aims to soothe some of the WhatsApp commerce pain points by moving much of the buying experience to its dedicated mobile shopping app.

There, customers can browser ‘carousels’ of product, ask questions to the buyer, and make an online payment via a clickable URL if they prefer that to cash or bank transfer. (That’s powered by Razorpay, a fellow YC graduate from India that we wrote about last year.)

Beyond the transaction itself, Meesho also alerts sellers when potential customers are viewing their store on the platform — giving them a chance to interact — while it condenses new product listing alerts into one message per day which is sent via a Facebook Messenger bot. Yes, that is yet another app, but it removes the irritating WhatsApp spam — since only a fraction of products are relevant to a customer — and could deliver a more qualitative interaction and, ultimately, sales.

Meesho and Messenger are also important mechanisms for outreach, too, Aatrey said.

“Facebook is generally used by small businesses for customer acquisition, but they do not keep their customers there because they can’t push messages to all users,” he explained. “If 100 people like a Page, for example, maybe 10 will see each message in their Timeline.”

That’s important given that small businesses in India which Meesho targets don’t tend to invest money in Facebook ads, boosting their posts or pretty much any marketing activity at all.

Aatrey said the sign-up process is easy, deliberately so because Meesho is working with people who may not be particularly tech savvy. Retailers simply provide a Facebook page URL, which the service uses to pull product info and images and create a Meesho shop automagically.

Meesho claims over 1,000 businesses on its platform right now but it is not monetizing its service at this point. Aatrey said there are no plans to make money at this point, but his current thinking is that, when the time is right, Meesho will take a commission from sales it helps facilitate. That again ties back to a reluctance to spend on the marketing side.

The company raised an undisclosed seed round last year which, in addition to the money it took for its place at Y Combinator, gives it sufficient capital to “sustain ourselves for a long time,” according to Aatrey.

That makes YC demo day, one of the premier gatherings of investors worldwide, a less pressured situation.

“We had raised before YC, so we have money,” Aatrey said. “If something good comes our way that’s fine, but it isn’t like we need to raise.”

Following the end of the YC batch, Aatrey and fellow co-founder Sanjeev Barnwal will head back to India to rejoin the six other people on the Bangalore-based team. Meesho is planning a number of updates, which will eventually include discoverability options to enable customers inside one store to find products from other Meesho-powered retailers.

While he admitted that being in the U.S. is a challenge since his business runs on India time, Aatrey highly recommended other Indian founders to consider a stint at YC.

“We have learned to talk to our users better and understand their needs,” he said of the program. “YC helps you learn a few habits that are important, for example focusing on one thing at a time and talking to customers every day. When you start doing that, you’ll see positive results.”

“For someone who hasn’t worked in U.S., I’d definitely recommend YC — even if they need to be in India for operations,” he added.