A startup called Simbi has raised $1.2 million in seed funding to popularize its marketplace where people can barter skills and services online.

Greylock Discovery fund, Crunchfund and Ranch Ventures invested in the round along with Y Combinator. The company is part of Y Combinator’s current batch.

Founder and CEO Kjerstin “KJ” Erickson said her five-person team intends to use the funding for hiring and to make the marketplace better known. The company is also constantly working to improve the search and matching algorithms that help users find services they want, or people who want what they have to offer on Simbi, she said.

Simbi, which is short for “symbiotic,” has been in beta and open to users age 18 or older since January 2016. It currently exists as a website but the startup wants to develop native iOS and Android apps, Erickson said. 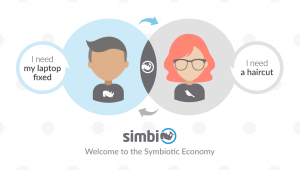 Simbi is a marketplace online where people can swap services with one another.

The 15,000 services offered by users on the platform so far have ranged from serious to whimsical, Erickson said. Lessons are one of the most popular things people can list, whether they’re focused on business and tech skills, or creative things like magic or beatboxing.

Users list a service or skill-based offering for free on Simbi, but what they offer is assigned a value through credits, a kind of virtual currency.

While the company is not yet revenue-generating, and remains focused on user growth for now, the credits system leaves open the possibility that Simbi could charge users to buy credits if they don’t want to put up a service to swap, or allow users to cash out their credits, for example, to get rewards from sponsors.

Even though its credit-based system is distinct, Simbi faces competition from freelance marketplaces like Fiverr, TaskRabbit and even edtech platforms like Udemy or Udacity.