Getting teens – and in particular, young women – interested in coding is a challenge a number of companies and organizations today have been tackling in recent years. But a newer startup called Vidcode is taking a different approach. Instead of online courses aimed only at teaching coding basics, Vidcode is appealing to teens by having them learn to create things they’re actually interested in – like Instagram-style filters, memes, and Snapchat geofilters, for example.

Now, the company has lined up Snapchat as a partner in this effort.

On Wednesday, Vidcode is launching a Snapchat geofilter contest, where the contest winners will see their geofilters uploaded to the popular social app, where they can be used by the entire Snapchat user base. Students will have a month to create their filters, the company says.

“It’s really awesome for teenagers to have the opportunity to build something for this huge audience – that means a lot for them,” explains Vidcode co-founder and CEO Alexandra Diracles, who had been studying computer science in grad school ahead of running Vidcode.

The startup, which is co-founded by Leandra Tejedor and Melissa Halfon, got off the ground as a Startup Weekend hackathon project in early 2014, where the founders initially met. The team won the competition, giving them immediate validation for the idea, as well as the inspiration to continue working on it.

“I was really interested in finding a way to apply my own love for STEM and for programming to engage more girls,” says Diracles, of the project.

Vidcode officially launched a year after their hackathon, with a Kickstarter campaign aimed at raising the funding needed to build out the full product. 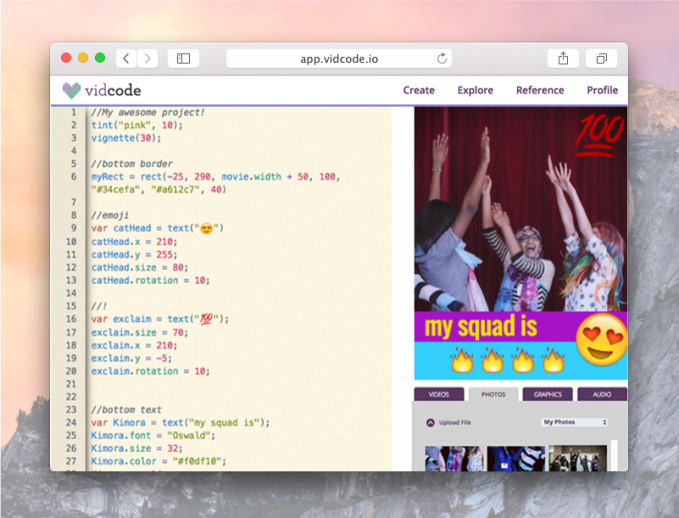 “We connect coding to teenagers’ daily hobbies,” says Diracles. “Today that has a lot to do with video filters, Instagram and Snapchat. We show how to create those technologies and make them even better with code.”

Today, the company offers online, self-guided courses, similar to something like Codecademy. Students start the lessons, which are about 45 minutes apiece, while using an online code editor as they learn. What’s different with Vidcode, however, is that there’s also a media library on the right side of the screen where students can upload their own content, like images and videos. This allows them to create projects using their own media, making the experience more personal.

The lessons are open-ended and can be repeated as often as needed, allowing students to move at their own pace. 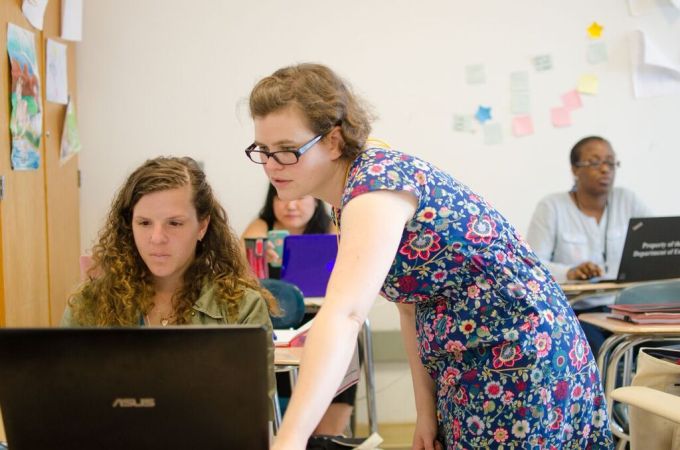 The online courses launched last year, and more recently, Vidcode has added tools for teachers for use the in classroom, licensed annually. Its software is now being used in 5,000 U.S. schools and nearing 100,000 students on the platform. Its learners are creating around two or three projects per week, the company claims.

Tapping into what teens like to get them coding has been working, according to Vidcode’s early data. For example, a little over a week ago, the company launched a course where students could build an AR game, inspired by Pokémon Go. It saw around 5,000 projects made in a week’s time.

Snapchat is only one of Vidcode’s partners. The startup is also working with the Girl Scouts of Greater New York to build a coding program for middle school, as well as with other organizations like Intel Education and Amy Poehler’s Smart Girls. Diracles adds they’re now having early talks with Facebook around Virtual Reality education, too.

Vidcode is participating in Y Combinator this summer. A team of seven full-time, the startup raised a small angel round after its Kickstarter campaign.

The Snapchat contest is going live on Wednesday here.