The firm, which is headquartered in Palo Alto, has done so well that it just wrapped up its ninth fund with a cool $2.5 billion. It also now features offices in New York (opened in 2005) and in London (opened in 2011).

Late last week, over coffee at a San Francisco bistro, I sat down with TCV’s founding general partner, Jay Hoag, and general partner Woody Marshall, to talk about some of the firm’s latest hits, which include recently acquired Dollar Shave Club and LinkedIn, some of whose shares TCV acquired in February when they plummeted more than 40 percent.

We also talked about why mutual fund companies (with which TCV sometimes competes on deals) don’t make great private company shareholders, and what can be the bad advice of investment bankers, who are largely telling companies to wait until 2017 to go public. Our chat, edited for length, follows.

TC: You’ve invested roughly $700 million in Europe since opening an office in London, including deals in Spotify and World Remit. That’s a lot of capital.

JH: In London and Berlin and the Scandinavian countries, there was lots of activity we were seeing, and we thought it better to see it from quasi-local office.

WM: In Europe, [the investors on the ground are] very much early stage or buyouts or else guys who may call themselves growth equity investors but are really doing growth-buyout deals with a lot of debt. In terms of minority investments that startups can spend on product and sales and tech and marketing, we don’t have a lot of [competition].

TC: What about other U.S firms? Doesn’t Insight Venture Partners do a lot of deals in Europe?

WM: Insight does everything globally out of one office in New York. We’re pretty active, so we don’t necessarily like to be a tourist. We like to be part of the local community, so we felt like it was important to plant our flag in the ground and hire local people.

TC: One of your more recent investments was in Believe Digital, a Paris-based next-generation music label. What does that deal tell us about your style?

WM: It’s a growing, profitable business that’s already achieved significant scale with hundreds of employees. Our co-investors are two little French funds, and we were the largest and only investor in the financing we did, which is pretty typical. Also, the company has been around long enough that some of the funds will be thinking about selling some of their stock going forward. Most of our deals are a mix of primary and secondary stakes.

TC: Five of your portfolio companies have been sold this year, including the data marketing firm Merkle, which just sold a majority stake to Dentsu. You also invested in LinkedIn, which turned out nicely for you.

JH: We didn’t see that [Microsoft acquisition] coming; it was a nice surprise. But if you’re going to deploy a dollar, why wouldn’t you look at a public company as well as private companies and assess, “Well, this appears fully valued, but this other one is discounted by 70 percent,” as long as you have the right insight. And the public markets tend to overreact on a quarterly basis.

TC: Why aren’t more venture funds investing in discounted publicly traded companies, especially given that so many of them got socked earlier this year? My understanding is that most firms aren’t restricted from doing these deals here and there.

JH: Generally, it’s  because the [universities and endowments and other] sources of capital for all of us want to think of us as being in discrete [buckets]. Either it’s, “I’m in investing in a private manager” or “I’m investing in a public manager.” So it’s not an easy sell.

WM: It’s also hard. A lot of times you don’t have access to perfect information. It’s a different process. But your private activity informs your public activity and vice versa. Even when we aren’t looking to deploy money in the public market, we probably spend more time listening to quarterly conference calls than most private investors, because when you’re thinking about diligence, that’s some of the best information out there. You can spend a gazillion dollars for [repackaged intelligence] or just go online and look at whatever calls you want. All that great trend and customer data is there. 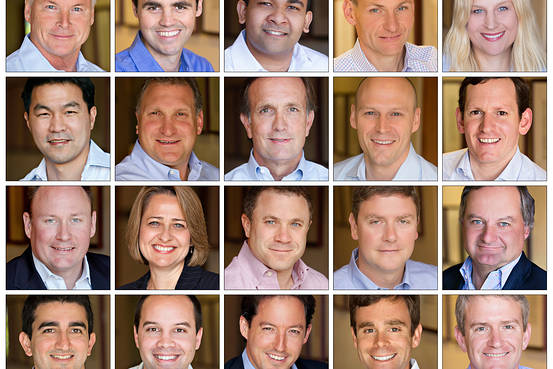 TC: You mentioned that you buy a mix of primary and secondary stakes. Can you talk about some of the discounts you’re seeing?

WM: Off of what? It depends on the last round and the structure of the last round. A lot of people have said, “Stay away from unicorns.” But there are a lot of great companies out there that are looking to raise money. Maybe [their last round was] lavish [so the price is now] maybe a little bit up or down, but in the meantime, the business has materially executed since that last round. So even though the [valuation is] similar, your multiple is half because the business has doubled. You have to look at these opportunities on a relative basis.

TC: Mutual funds have gotten into your business in recent years. I still see them popping up here and there in late-stage deals.

WM: Sometimes we don’t see anybody. Sometimes, if there’s a more formal process, we do. One deal we looked at earlier this year, we thought the discount was appropriate, and one of the T Rowes or Fidelitys did a flat round. But you’re generally seeing less aggressive behavior from the Baillie Giffords and the BlackRocks. You’re definitely seeing people pulling back and reevaluating the bets they’ve already made.

TC: Reevaluating and literally re-valuing — and publicly — which I think has surprised some of the companies these managers have backed.

JH: If we hear a company is talking with T Rowe and Fidelity and BlackRock, I understand why. The company probably wants a high price and a quick process. But we [know we] should probably spend our time elsewhere. Full stop.

[Mutual funds] are buying [private stakes] so they can have lower costs at the IPO price, etc. But the moment [their portfolio companies] underperform their competitors, that activity stops. These private investments have to have a return associated with them. If they’re buying high and selling low, that’s not good.

TC: Could you see action being taken against any of these managers?

JH: Mutual fund and hedge fund guys have been sued in the past over valuations. Even if it’s just 5 percent of your activity, with [people on Main Street] going in and out of your fund, your [net asset value] is a very important measure. These investors are buying in, assuming the valuations [they are paying at any single moment in time] are correct.

WM: Some of these guys, they have deep pockets but they get those alligator arms sometimes. And management teams are starting to say, “I got it.”

TC: We’ve seen more M&A. In addition to your deals, Walmart just paid $3.3 billion in cash and stock for e-tailer Jet. What did you think of that deal? Did they just pay billions of dollars for Jet founder Marc Lore?

JH: Well, you can see he’s signed up for five years, so there’s some part of the value that is: Marc can help us compete mano a mano with Amazon. Part of the value is the underlying metrics. It seemed like a forward leaning price tag; if I were an investor in that deal, I’d be super happy.

TC: Why are IPO numbers still so pathetic?

JH: Frankly, I’m baffled. There’ve been what – six tech IPOs this year? The worst year on record was 2009, with eight [IPOs], but that followed a global financial crisis.

That we’re in extremely low numbers owes in part to bankers advising companies to wait, [telling them] that after the election, uncertainty will be reduced and 2017 will be a great year. I think that’s consensus.

TC: It sounds from your tone like you don’t agree with that consensus. Are you telling your portfolio companies to go out now?

JH: Yes. Even last year, we had [just] three [portfolio companies go public] and there were just 22 total companies altogether. It’s a little baffling with the markets hitting highs, interests rates at zero, [and] companies growing well. I’m not sure why bankers are so hesitant.

Either way, if you’re an investor on the board of a company, you need to be thinking independently. What investors will value six or 12 months from now might be totally different than today. Right now, bankers are telling companies to get profitable even if they’re not growing because “that’s what the market wants.” Well, that’s bad advice. Our job is to sort through all that and make sure the company is making the right trade-offs.

TC: I do wonder if certain companies have missed their window already, including in your portfolio.

JH: I guess I’d bounce the premise back. Going public is just part of the battle. In an IPO, you’re selling 5 to 10 percent of the company. If you’re going to own between 90 to 95 percent post IPO, you shouldn’t care what the IPO price is. You should care a lot about what life as a public company will be one, two, three, four years down the line.

In terms of  missing the window, if you go public and six months later you fall apart, that’s a really unpleasant thing for all and in particular the CEO. I’m not a big believer in windows. You always have to be reinvesting in the next act to sustain your growth. If you think you missed your window, that’s another way of saying your best days are behind you.