Editor’s note: Arik Kleinstein and Kobi Samboursky are partners, Hagar Sagi is the director of marketing and Yoni Krakow is an intern at Glilot Capital Partners.

Marketing technology is in the midst of a worldwide boom. Given the expansion of the internet, social media and various other forms of digital technology, there are a growing number of ways to market products and services to consumers. Expansion in marketing technology has been incredibly rapid.

In 2011, Scott Binder, CTO of Ion Interactive and a leading marketing technology blogger for Chiefmartec.com, published research showing ~150 companies operating in the marketing technology sector worldwide. This number grew to ~1,000 by 2014 and to a resounding ~3,500 in 2016.

In just five years there has been a 2,300 percent increase in the number of marketing technology solutions and vendors. While these numbers are remarkable, Binder claims industry growth is just getting started. “We are still in the early years of marketing tech being adopted in force,” he said during his keynote address at “MarTech 2016” in San Francisco. “There’s a whole world that is catching up on this.”

These advanced technologies give marketing technology companies the ability to provide better results.

Glilot Capital Partners, a Herzliya-based seed- and early-stage venture fund, has conducted extensive research in order to create an infographic mapping the marketing technology industry in Israel today (see end of article). With more than 160 companies divided into six major categories, Israel has grown into a hub for marketing technology innovation. (We understand that companies and categories may at times overlap and there may be categorization errors. This list is not exhaustive, and there are undoubtedly companies we did not identify. If you think your company was categorized incorrectly or you have information about companies we may have omitted, please reach out to info@glilotcapital.com. Feel free to share this infographic in blog posts, presentation slide decks, reports or any other appropriate medium.)

The current marketing technology revolution in Israel is being driven by a number of key factors. Foremost, Israeli companies are consistently faced with the problem of being located geographically far from their primary market, the United States. “The U.S. has always been the first step for any aspiring Israeli high-tech company,” said Nili Shalev, Israel’s Economic Minister to North America, in a statement about the NYC Israel Dealmakers Summit.

In a study of Israeli companies with greater than $20 million in annual revenue (conducted by the Harvard Business Review), 82 percent have U.S.- or Europe-based offices and 91 percent continue to operate with an Israeli CEO. So, while Israeli companies don’t need to hire a foreign CEO to be successful, an office abroad is a near requirement to appropriately scale their business.

The perpetual Israeli struggle to address their inconvenient location provides the motivation for marketing technology entrepreneurs to create technologies that will allow them to help companies market products more easily overseas. Because so many Israeli companies are suffering from this problem, it provides early-stage marketing technology startups with a strong base of potential customers who are able to begin using their solutions as early as their beta phase.

The solutions developed by marketing technology companies in Israel solve the geographic problem by making it easy for companies to market their products in places where they are not physically located.

The focus in the Israeli marketing technology startup community is on mobile marketing and content marketing.

Additionally, this knowledge and application of big data analysis is often acquired by entrepreneurs during their military service in the Israeli Defense Force’s elite intelligence units. Soldiers in these elite units are required to handle massive amounts of intelligence data that must be analyzed in a quick and efficient way. The skills they acquire in analyzing big data and utilizing sophisticated technology are then leveraged and directly applied to marketing technology and other industries in the form of technology startups. Alumni of 8200, Israel’s top-ranked intelligence unit and a driving force behind “Startup Nation,” have founded more than 1,000 companies, including Leadspace, Supersonic, Mintigo and many others in the marketing technology field.

While the increase in the number of funding rounds from 2014 to 2015 was modest (50→56), the average funding round amount rose substantially, from $4.8 million to $6.5 million, a 35 percent increase. Because of a large number of B+ rounds through June 2016, funding rounds are averaging an impressive $10.9 million, positioning total funding to be significantly higher than last year.

This July, TechCrunch reported that Taboola, an industry leader in content recommendation, made its second-ever acquisition with the purchase of marketing technology startup ConvertMedia, a video recommendation solution. While many Israeli startups dream about their exit from Day One, Taboola is a great example of a company attempting to build a multinational marketing technology powerhouse rather than simply getting swallowed up by a foreign enterprise.

With this acquisition, Taboola is expanding the reach of their business and looking to become one of the leading online video streaming platforms. Taboola’s example of taking the time necessary to build an industry-leading company rather than attempting to sell earlier is a trend that can potentially be adopted by others in the marketing technology industry, leading to Israel’s evolution into a marketing technology leader worldwide.

When looking at the infographic, it is evident that the focus in the Israeli marketing technology startup community is on mobile marketing and content marketing. The large number of active companies in these fields illustrate a shift away from traditional forms of marketing, such as print and television, toward strategies that are more compatible with the current trends in today’s global society.

Content marketing allows businesses to build customer relations, showcase industry expertise and draw consumers to their websites and social media pages. In 2015, 88 percent of B2B marketers employed content marketing, and 76 percent of those companies planned to increase the amount of content they produce going forward. In addition, a recent survey of marketing professionals showed 21 percent felt content marketing would have the greatest commercial impact in 2016, which was more than 5 percent higher than any other marketing activity.

As for the potential impact of mobile marketing, there were 1.86 billion smartphone users worldwide in 2015, with that number projected to rise to 2.08 billion by the end of 2016. In addition, more than 80 percent of internet users in 2015 used a smartphone. As these numbers grow year after year, mobile marketing will continue to evolve into one of the most important elements of a company’s marketing campaign.

While 2015’s record Israeli marketing technology successes will be tough to replicate year in and year out, data from the current year projects 2016 to build on the success of 2015. M&A activity for 2016 is on pace to finish around $350 million, which is just above last year’s $329.5 million. In addition, total funding is projected to finish around $480 million, a $110 million increase from 2015 (Source: Start-Up Nation Central finder).

There’s certainly a lot to be excited about in Israel’s evolving marketing technology industry, and we look forward to seeing what the future has in store. 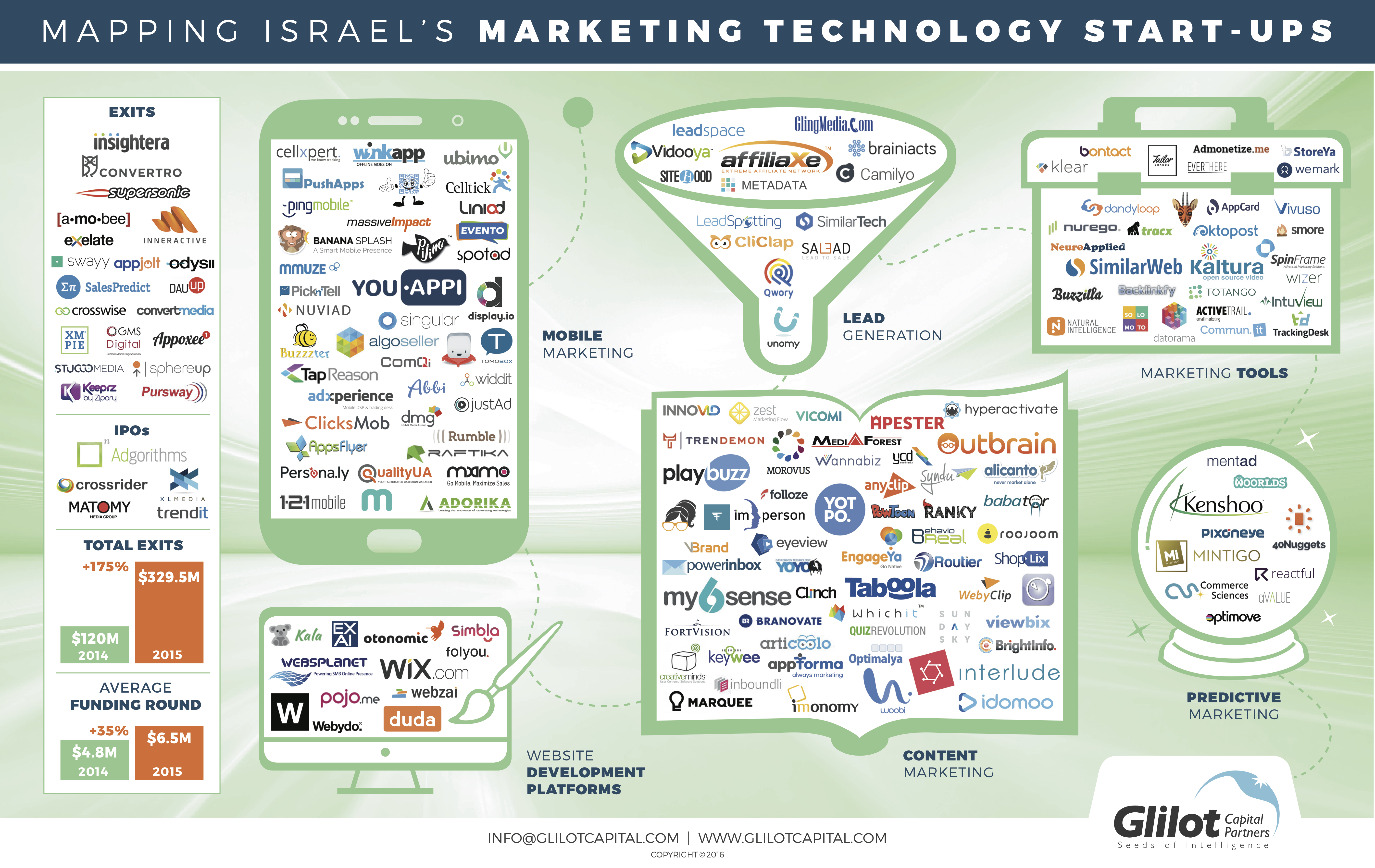