Motorcycle makers Alta Motors have opened the doors to their new factory in Brisbane, California, and TechCrunch was on the scene for a first look.

A quick trip from downtown San Francisco, the factory is in a low and unassuming concrete structure. Inside, it’s surprisingly quiet, thanks in part to the fact that the motorcycles Alta makes are all-electrics, and final assembly of these bikes is ultimately done by hand.

The startup’s flagship product, the Redshift MX, is a motocross bike newly shipping to dealers and retailing at $14,995.

The company also makes a street-legal version of this bike, the Redshift SM, which sells for $15,495.

Why build their own factory rather than outsource to markets known for motorcycle manufacturing, especially Japan, home of Yamaha and others?

Alta Motors’ CEO and co-founder Marc Fenigstein said, “Everything we’ve done in-house we’ve been able to do faster, cheaper and at higher output than outsourced. The hardest part is bringing up a supply chain that delivers all 460 parts that we need on time on quality and on cost.”

For the unfamiliar, Alta Motors, formerly known as BRD Motorcycles, is one of the electric vehicle makers that has managed not to burn out or fade away, while others like Mission Motors, Coda and Aptera shuttered, and Brammo and Fisker pivoted and retrenched.

Fenigstein said one thing that’s special about the company’s Redshift bike is that its battery carries 80 percent more range, per pound, than any other battery in motorcycles. The Redshift bikes accelerate from 0 to 60 in 3.3 seconds.

And in an environment where the tires are constantly gaining and losing traction, Redshift’s electric drive train and software offer riders a higher degree of control over their bikes’ movement than traditional, gasoline powered bikes, even the high-performance variety, the company claims.

With 50 full-time employees, Alta makes all the electronics that run their motorcycles, and the packaging that contains their batteries. They acquire battery cells, wheels, tires, brakes and suspension systems from other suppliers.

Their bikes’ batteries specifically weigh about 70 lbs. (30 kg) and have a capacity of 5.8 kilowatt hours, according to Alta Motors CTO and co-founder Derek Dorresteyn.

That, and acceleration that’s comparable to or better than gas bikes, makes the Redshift appealing to riders who don’t want to spend as much time fixing things as riding or competing. 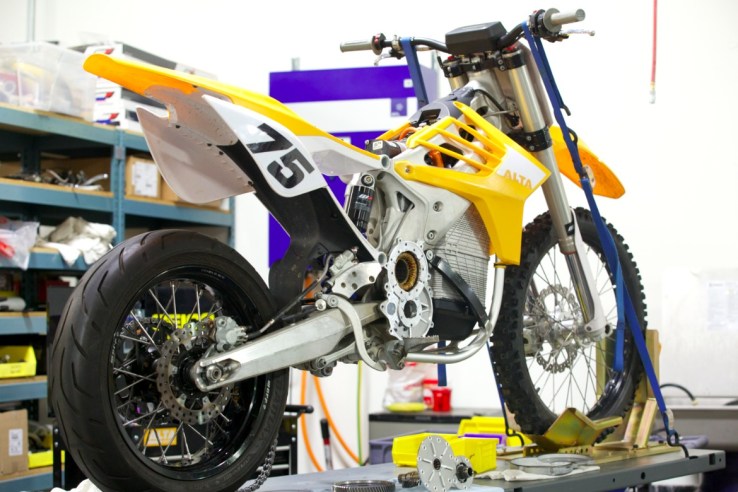 Within 3 years, Alta plans to be selling the Redshift, and other all-electric products, internationally.

That could make the San Francisco startup competitive with companies like Gogoro in China, as well as other U.S.-based electric-vehicle motorcycle makers like Zero Motorcycles and Harley-Davidson, which plans to release an electric bike, eventually.

Dorresteyn and Fenigstein declined to specify what other vehicles Alta may develop and when, but they said their technology could work in scooters and smaller motorcycles that are prolific globally.

Alta has raised $17.5 million in equity funding to date, with additional venture debt financing of $2 million.

The company counts among its advisors and angel backers Tesla’s original founder and battery tech inventor Martin Eberhard, and EnduroCross inventor and the man credited with getting flat-track motorcycle racing into the X Games, Eric Peronnard.