Twitter’s curated tweet slideshow Moments has failed to move the user growth needle. But the sagging public company hopes to make itself accessible and indispensable by allowing more than just its in-house curators and partnered news publishers make Moments.

Today Twitter announced that “a broader group of creators will be making Moments, including influencers, partners, brands… and in the coming months, everyone.” It will start by featuring Moments from civil rights activist DeRay (seen below), Allure magazine, and the Budweiser brand.

The Birth of A Movement, Ferguson 2014 #MikeBrown

Twitter’s aim may be to get users to promote their self-created Moments to their own networks, including people who don’t use it already. Harnessing the creativity of the masses could also spawn more viral hits. Some of the most memorable Moments have been crazy stories told in sprawling tweetstorms rather than predictable aggregations of news.

While Twitter is turning Moments into an open platform, it won’t be sharing ad revenue with new creators the way Tumblr is now starting to pay bloggers who host ads — at least not yet. However, the company is not ruling out the idea of revenue sharing if there are future opportunities.

To throw some extra visibility at the Moments platform, creators will get a tab on their Twitter profile on the web that lists that Moments they’ve made. The best Moments are eligible to appear in the Moments tabs under its various categories. Unfortunately, Twitter has still been hesitant to more deeply integrate Moments into its core experience. 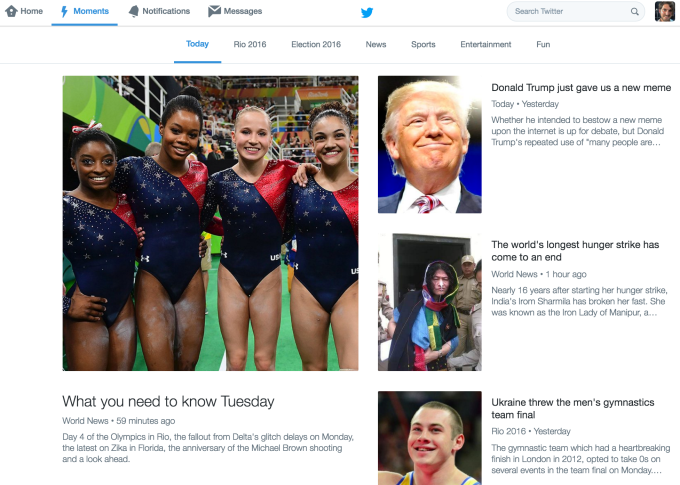 Currently the product exists as a dedicated tab in the Twitter app, but feels buried compared to the more necessary Home feed, notifications, messages, and profile tabs. Baking Moments into the top of the feed or the on-boarding experience could make them more of a habit for Twitter users. Instagram’s choice to insert its Snapchat clone Stories atop its feed has brought it instant traction. 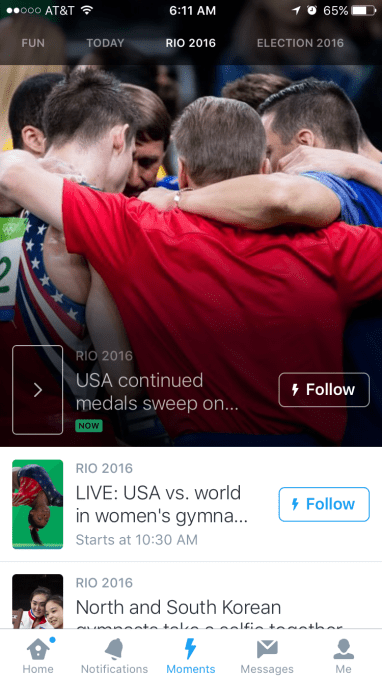 Moments is almost a year old, having methodically expanded from the US to the UK, Australia, Canada, Mexico, and Brazil under the curation leadership of former New York Times editor Marcus Mabry. It began showing Promoted Moments native ads last October.

But in a year when Twitter desperately needed a boost to user growth, it found none. User count is up just 3% year-over-year while revenue growth has sunk from 60% to 20%. Twitter mentioned nearly all of its core products in its most recent letter to investors, but Moments was strangely absent. Last quarter it did say that highlighting Moments on the logged out home page drove a 6% increasing in visitor time on site.

Though the visual experience of Moments can feel clumsy at times, it shines by making Twitter feel cohesive and comprehensible. Wider coverage of current events and random culture could show Twitter’s breadth. Yet as long as it’s buried in a tab people don’t feel compelled to open, Twitter may not be squeezing as much value out of the Moments product as it could.

Showing algorithmic highlights atop the feed ended up being extremely helpful despite the initial worries. We’ll see if Twitter is bold enough to give Moments the spotlight.