Google Now, the intelligent personal assistant bundled into Android and Google’s search application, is already adept at bringing you the information you need at the right time, whether that’s traffic alerts, event reminders, sports scores, stock updates, weather, flight info, and much more. But one area where Google Now falls a little short is in customizing the assistant more precisely to your needs.

Today, this is done via a series of on/off toggle switches in the app’s settings, which is a bit hidden, as well as by tapping on individual items where you can tell the app you’re “not interested” in that card, or that news source.

The feature was spotted in the wild by the blog Android Police, which claimed it may be rolling out slowly. However, a Google spokesperson confirmed “Interests” is an experiment that the company is testing with the look-and-feel of the product, adding that Google has nothing to announce at this time.

With “Explore Interests,” Google is offering a different way to track news and other topics, beyond allowing Google to passively determine this information based on things like search history or location. The app informs users they can “pick teams, bands, movies, and more” and a click-through takes them to a screen where there are colorful tiles for sections like “Sports,” “TV,” “Movies,” “Musicians,” “People,” “Stocks,” and more.

As you dive into each section, you can browse through cards of individual items across a number of subcategories, then click plus (+) signs to add the item to the list of things you’re tracking.

For example, under the “TV” categories, there’s a subsection of just “Reality” TV shows, with items like “The Voice,” “American Idol,” “The Bachelor,” and others available to track with just a tap. Meanwhile, the “People” section may show you cards for politicians like Clinton and Trump, as well as athletes, actors and other figures. 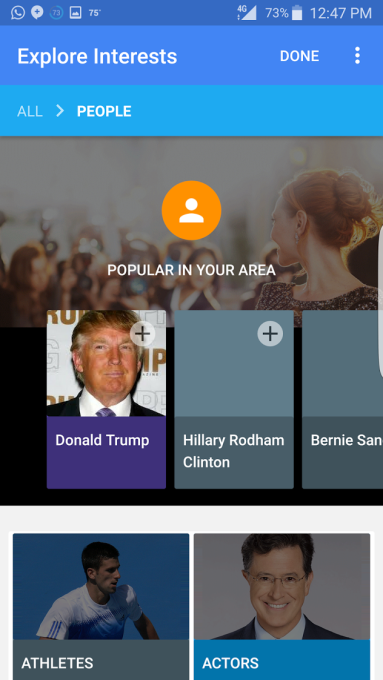 As you browse through these sections, you can also see which topics are “Popular in Your Area,” which gives the Google Now interests feature a bit of local flair.

The idea of using Google to track very specific information is something that’s been around for ages, dating back to the launch of Google Alerts. A number of startups also arrived over the years, trying to best the Google Alerts experience, but most have been focused on the “social” mentions space. Google Now’s (hopefully) forthcoming “Interests” section will instead offer a similar tracking ability, but bundle it into the app that users launch daily.

Being able to better customize the Google Now assistant is something that comes at a critical time for the company, as Apple’s Siri is making its way onto Mac in addition to iOS and Apple TV, Cortana is bundled into Windows and can’t be entirely shut off, and Amazon’s Alexa platform is making strong headway into the customer’s home through its Echo speaker and other devices. Google, therefore, is challenged to not only make its assistant practical and proactive, in terms of offering things you need to know – like when to leave for your meeting – but in making it a tool that tracks those things you want to know about, too.