A startup called Verifly is making insurance on-demand, and per-flight, available to drone users today with a new mobile app and service that’s been in the works since late 2014. The service launches just in time to support a burgeoning consumer and commercial market for unmanned aerial vehicle use in the U.S.

Over half a million drones that weigh more than half a pound have been registered with the U.S. Federal Aviation Administration since December 2015, when it made registration mandatory. And while the regulations are evolving, the FAA also set new rules for small UAVs in June that industry insiders are saying will bring even more drones into domestic airspace. 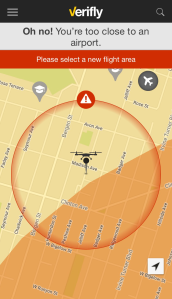 Verifly co-founder and CEO Jay Bregman said that he and co-founder and CTO Eugene Hertz wanted to design something simple, easy to use and tailored to the particular type of risk associated with flying a drone.

Consumer drones have hit power lines in Southern California, crashed into the stands at major sporting events including the U.S. Open in 2015, and most famously onto the White House lawn.

The Verifly app draws a quarter mile circle around users, analyzes information from the startup’s proprietary geospatial and weather databases, and shows the user their estimated risk. It then sets a price for the drone pilot on a policy they can buy on-the-spot. If they agree to the price, users pay with a credit card to get $1 million in third-party liability coverage with $10,000 of invasion-of-privacy coverage.

Previously Bregman founded ride hailing startup Hailo, the Uber challengers now majority-owned by Daimler, and merged with MyTaxi and Hertz was CIO of the e-commerce startup Quidisi. While Verifly is a licensed producer, its policies are underwritten by Global Aerospace Insurance, which has been providing aviation insurance policies well before consumer UAVs hit the market.

Verifly has had to get approvals to operate state-by-state, since insurance is regulated by state-level government, not the FAA or any other White House office, where drones are concerned.