A year ago, startup valuations hit a 12-year peak as the numbers of companies joining the billion-dollar-plus club soared.

Today, those numbers are looking far more run of the mill. So suggests a new survey published by law firm Fenwick & West, which analyzed the venture financings of 195 Silicon Valley-based companies over the second quarter to draw its conclusions.

Among the survey’s findings: up rounds — in which a startup’s price per share increases over its previous funding round — are down slightly. Specifically, in the second quarter, they exceeded down rounds 74 percent to 13 percent, compared with the first quarter of 2016, when up rounds exceeded down rounds 78 percent to 11 percent. (The other funding rounds were flat.) 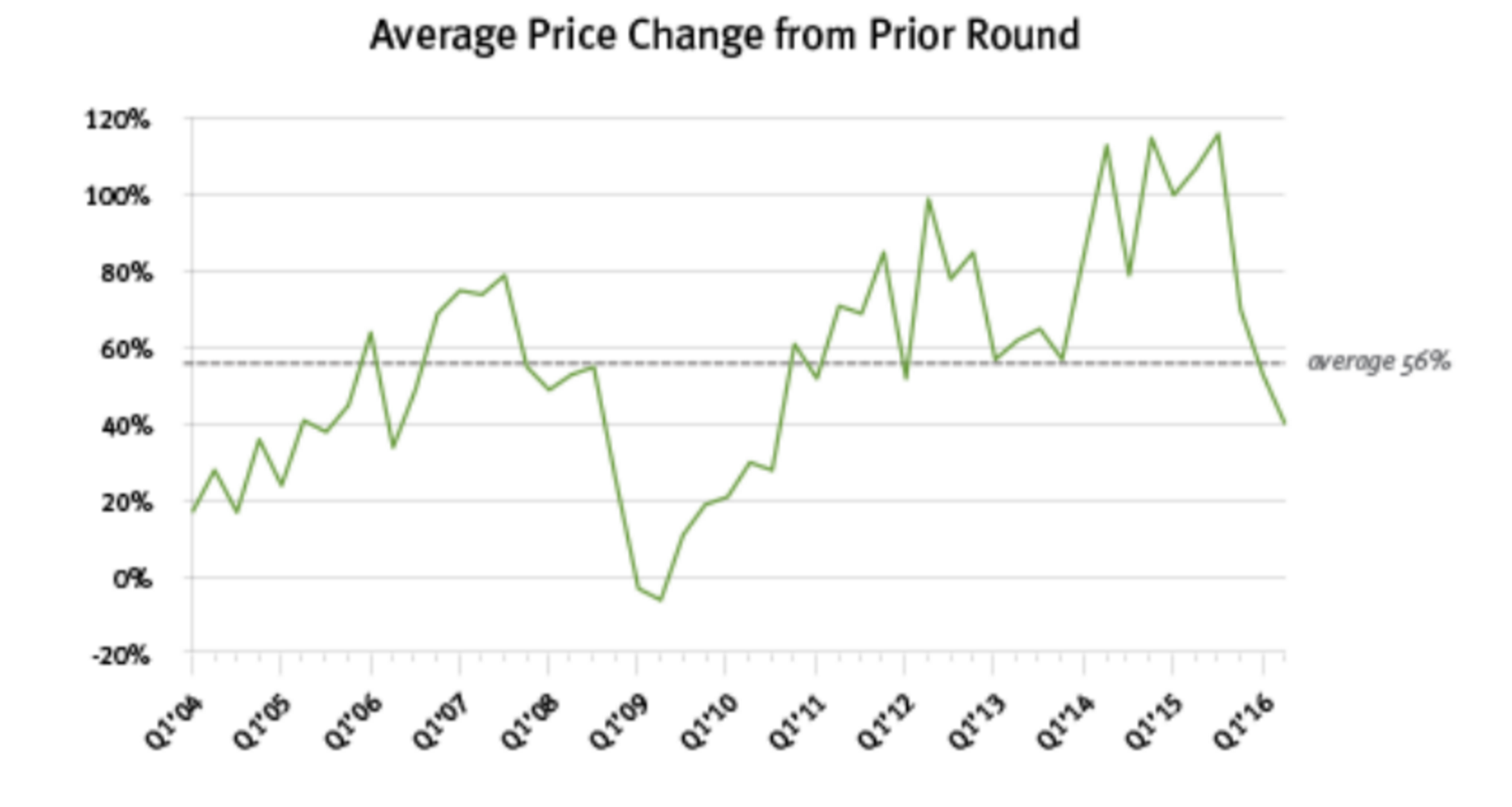 “It’s not like things are so horrible now,” says attorney Barry Kramer, who co-authored the survey. “But this is the third straight quarter of weakening valuations. They’ve fallen a great deal from where they were a year ago. And the question is: where do we go from here?”

Kramer warns against drawing comparisons to the downturns of 2002 and 2008, noting that unlike both periods, when capital was in short supply, there’s currently plenty of money sloshing around Silicon Valley.

Instead, he attributes falling valuations to human nature. On the one hand, investors are likely trying to figure out if there’s a valuation disconnect. On the other, many later-stage companies aren’t exiting through IPOs or M&A; that means investors who’d otherwise be focused on investing in and ramping up younger, newer startups are instead finding themselves spending more time with their older portfolio companies.

Indeed, as TechCrunch reported last month, while there was a 3 percent rise in venture dollars put to work in the second quarter, that percentage was skewed by big investments in Uber, Didi, and their ilk. The number of global deal volume actually fell to a three-year low.

For what it’s worth, deal terms haven’t changed much, which seems like a good sign for many startups. Asked if he was seeing an uptick in senior liquidation preferences — onerous terms that later-stage investors demand when they start feeling more nervous about the market — Kramer says he hasn’t.

There was one quarter, he says, that senior liquidation preferences were featured in as few as 19 percent of financings, but “every other quarter, it’s ranged from 25 to 35 percent of deals, and in the second quarter, 30 percent [of Silicon Valley fundings] featured them.”

That’s “nowhere near” the number of deals that have included such terms during tough times in the past, he adds.