Tarun Kalra Contributor
Tarun Kalra is a principal at Next World Capital.

In short, SaaS would take over segments that previously were not SaaSified. As hotbeds of net new SaaS activity consolidate into market winners, widespread innovation within a segment gives way to incremental innovation. The focus of entrepreneurs and investors mostly moves on.

Yet, the current wave of HR SaaS innovators entering the market over the past few years is proving that there can be more to the story even after a segment has been SaaSified. As we assess the market, product, competitive and talent dynamics, we see a perfect storm of enabling characteristics pushing beyond incremental innovation into the widespread disruption of the firmly established HR SaaS category.

We believe HR SaaS is one of the first clear cases of a third, newer path of broad SaaS innovation — next-generation SaaS (SaaS 2.0) disrupting established previous generations of SaaS (SaaS 1.0). HR 2.0’s success, playing out over the coming years, will be a catalyst for increasing entrepreneurial and VC attention into the platform potential of this third path. We will begin to see waves of future SaaS innovation focused on attacking established SaaS categories.

As the poster child for SaaS 2.0, how successful will HR innovators be? Our rough assessment of Next World Capital’s HR Innovators NextScape reveals a few $100 million of the $13-15 billion of annual HR software spend shifting to HR 2.0 innovators in 2016 (see the graphic at the end of the article). Over time, the strengthening force of key enabling dynamics discussed below will enable HR 2.0 innovators to battle for nearly all of the HR software market.

Underscoring this shift, the cost of talent per unit of economic output has risen by a factor of nearly 3x from an indexed value below 40 in 1977 to over 110 today, according to Trading Economics. Said another way, the U.S. economy has firmly progressed to an information economy, where talent has replaced goods as the most significant and important determining factor.

The U.S. economy has firmly progressed to an information economy, where talent has replaced goods.

The past generation of HR SaaS platforms were all founded before the absolute shift to a talent economy began. They were largely products of a transitional economy where talent was but one piece of the equation.

HR 1.0 placed a premium on administrative versus talent-centric value propositions, i.e. moving offline tasks online, automating processes and delivering compliance. But with the transition to a talent-centric economy, the market now has moved beyond a focus on administration and process. It desires a new breed of HR SaaS, one which aligns business goals with talent versus aligning business goals with process.

Product dynamics — a focus on millennials

Clean and performant user experiences, intuitive processes that require little training, mobile-first, collaboration-first, try before you buy/freemium, APIs and integrations, powerful analytics, flexibility/configurability and consumerized interfaces can all be buzzwords that are thrown around when describing software.

But for millennials, many of these traits are table stakes for positive software experiences. HR 2.0 innovators are effectively exploiting perceived weaknesses in 1.0 offerings as millennials look not so much for one single buzzword but rather for an overall software experience with which they relate.

Before SaaS 1.0 arrived, only the most mission-critical client-server software made economic sense for mid-market buyers given the high up-front costs. SaaS 1.0 offerings initially battled in this largely greenfield mid-market. Here, they bulked up with functionality and enterprise chops before eventually moving up weight classes into the enterprise, where client-server offerings dominated. As successful SaaS 1.0 vendors increasingly focus up market, emerging SaaS 2.0 innovators emerge in their wake to take on a somewhat orphaned mid-market.

HR software has followed this playbook with many HR 1.0 platforms almost exclusively focused on the enterprise opportunity. Yet, HR 2.0 innovators enjoy a second beneficial competitive reality. In 2012, the dominant HR 1.0 vendors were acquired — Taleo by Oracle, SuccessFactors by SAP and Kenexa by IBM. As a result, HR 2.0 is stepping into a landscape largely devoid of independent 1.0 vendors.

2.0 offerings, on the other hand, uniquely enable organizations to attract, hire and maximize talent.

“No one ever gets fired for buying IBM” is a commonly heard phrase with the general idea being that buying servers, storage or even commodity applications from an established platform company is safe. These technologies are not a competitive differentiator for the buyer’s business, so why take risks on upstarts? HR2.0 aims to flip this script.

HR 2.0 argues that Oracle, SAP and IBM are not a fit in a talent-centric economy precisely because they are not aggressively advancing innovation and differentiation. 2.0 offerings, on the other hand, uniquely enable organizations to attract, hire and maximize talent, a central competitive advantage in today’s economy.

BetterWorks, Checkr, Culture Amp, Greenhouse, Grovo, Gusto, Justworks, Lever, Namely, Reflektive, SmartRecruiters and Zenefits are a few examples of HR 2.0 innovators that received Series A financings between 2012 and 2015. It’s no surprise that these emerging companies, which have forward-looking entrepreneurs and strong VCs, have recently stepped in. Together, the enabling dynamics and entrepreneurial community have converged to usher in the first widespread wave of SaaS 2.0 innovation against an established SaaS category.

At Next World, we actively track 80+ HR SaaS players within our HR Innovators’ NextScape. This NextScape is not exhaustive, but rather focuses exclusively on players that are driving the HR 2.0 wave. We break down the market into the core HR functional areas of talent acquisition, talent maximization and HR administration.

With innovators still commanding a small fraction of HR spend and new market entrants continuously emerging, we are perhaps in the second inning of this wave. Given the sheer breadth of activity, consolidation is inevitable. New market entrants must carefully consider the mission criticality and depth of workflow and use cases that they subsume. However, the foundations are in place for a new breed of enduring HR SaaS platforms. Their continued momentum will bolster the entrepreneurial community’s willingness to attack other established SaaS categories. 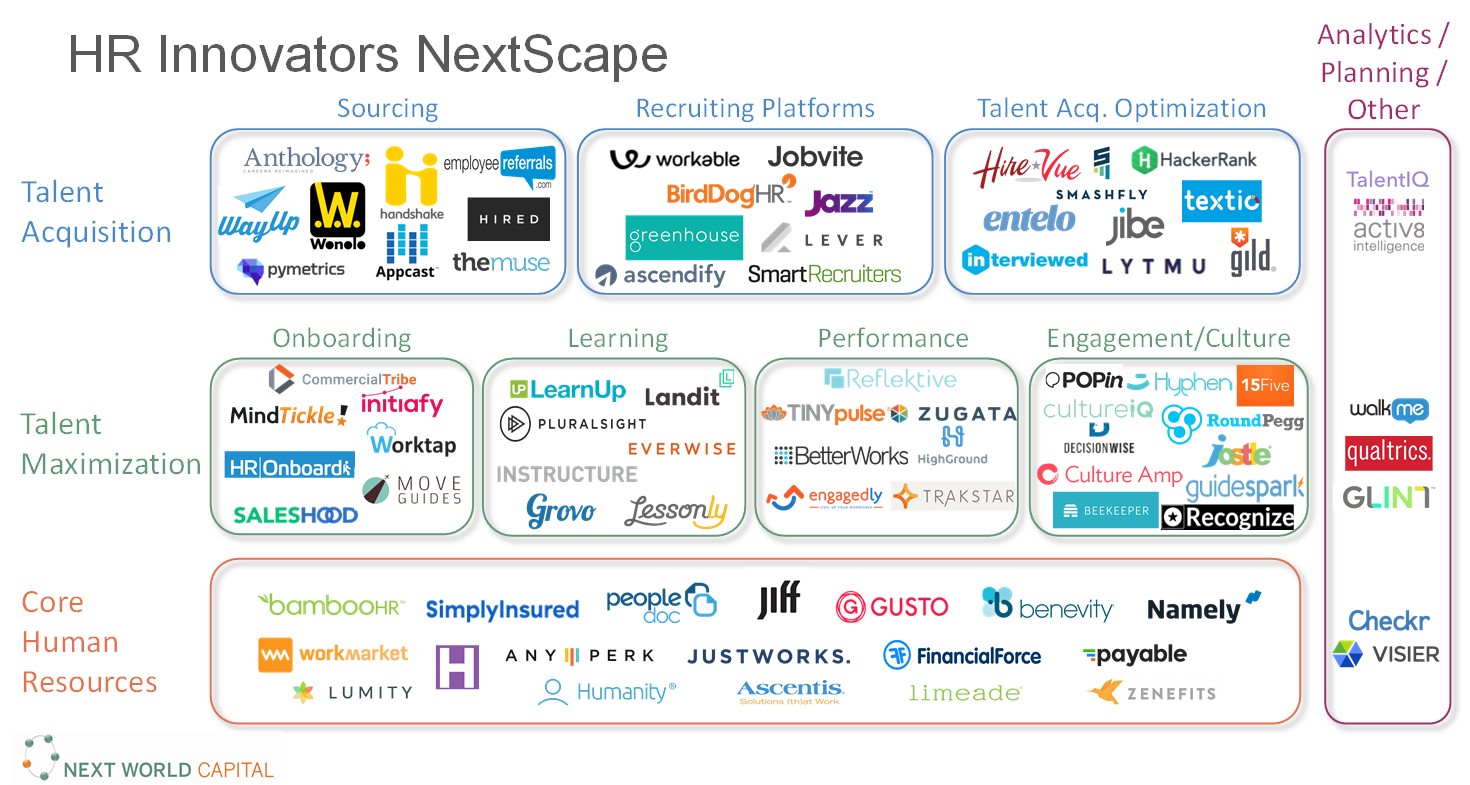