The $1,200 Staaker drone does away with the traditional remote control, replacing it with a wearable armband. Instead of controlling the drone like a remote-controlled plane, you put the Staaker into one of several follow modes and it will keep you in view as you careen down a mountainside or flip upside-down on a surfboard. I had a chance to try it out and was mightily impressed. 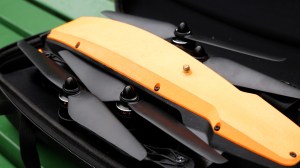 Folded up into its protective pouch, Staaker is small and light enough to throw in a backpack.

The new drone is foldable into a relatively small package, perfect for bringing into the mountains for filming extreme sports. When it’s unfolded, the landing gear folding down cleverly locks the arms into place and the drone is ready to fly.

The drone can be flown as a normal drone, using simple up/down, closer/further away from me, turn left/turn right controls: Useful for establishing shots and B-roll, but the drone is pretty clumsy to fly in this mode. What it is far better for, however, is its follow modes, where you set up the drone’s mode, after which it’ll just keep following you around as you pay attention to your extreme sport activities.

Staaker’s drone uses a 3-axis gimbal and a GoPro for the actual filming. That feels like a step back from some of the live-view drones you see these days, until you remember that there’s no need to monitor the footage as you’re shooting. Put differently: If you have time to look at what the drone is doing, you’re probably not skiing/driving/skateboarding/falling on your face hard enough.

The drone that’ll stalk you 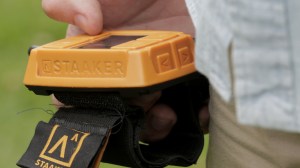 Staaker is controlled from a sturdy arm-mounted remote control/locator. It looks pretty big, but that makes sense: It’s designed to be possible to operate wearing a wetsuit or snowboard gloves.

Both the armband remote and the drone have a series of sensors built-in, designed to keep the drone pointed at you every step of the way. 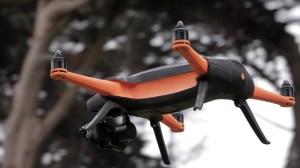 Is it a plane? Is it a bird? No, of course not, don’t be bloody daft. It does sound an awful lot like a drone, though. What could it be?

The most interesting thing, in my mind, is that most drones are there to film others. Staaker is different, and, in the process, is turning the industry on its head. By creating a drone you can use to film yourself, it is broadening the target audience from eager filmmakers to everyone who is involved in sports and other physical activities that are worth filming. It’s hard to say whether this subset of people are in the market for selfie-drones on steroids, but judging from some of the footage I’ve seen Staaker’s drones create, I can easily see this being huge. I can’t wait to see what happens when this gets in the hands of extreme sports athletes.

The one downside of Staaker’s drone is that it doesn’t currently have obstacle avoidance, which may turn out to be a problem for some users. It certainly turned into a problem when we were filming TechCrunch’s video report on Staaker; as we were filming some additional footage at the end, a seagull crashed into the drone (or vice-versa?) disabling it and sending it crashing into the highway. The lesson to learn here is to keep the drone away from wildlife and populated areas, perhaps.

From extreme sports to the world 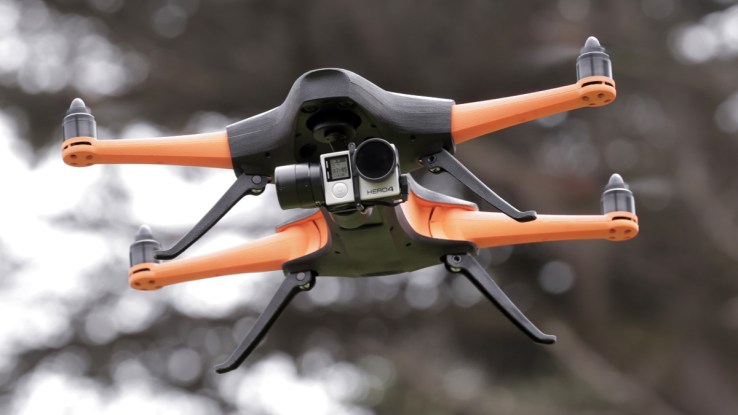 Hey, don’t turn around now, but I think we’re being followed.

Based in Norway, the company claims its location is perfect for creating this type of startup.

“We have access to a lot of smart engineers,” says Ole Jørgen Seeland, the company’s CEO, “but far more importantly, Norway is a natural destination for extreme sports, which means we have a huge amount of opportunities for testing. We have destroyed a lot of drones along the way, but that’s OK: These machines are built for use in extreme situations. Every damaged drone helped us refine the product to make it stronger — and to help us gauge which spare parts we need to stock.”

Having the advantage of only ever having to film forward helped determine camera position and enabled the team to put together a boldly designed drone.

“We built 50 prototypes to get to where we are today,” say Seeland, explaining that the company has put its drones through hell to ensure they work as intended. “We had 20 different iterations on the design along the way.”

On the topic of Norwegian — the founders of Staaker can’t quite make up their minds as to how the company’s name is pronounced; I’ve heard both “stacker” and “stalker.” The latter might make the most sense for native speakers: “Staaker,” when pronounced in Norwegian, would sound exactly like the English word “stalker.” Oh multi-lingual puns, how we love thee.

Starting today, the drone can be pre-ordered, which will scare off a few of those who’ve backed drone startups in the past.

ZANO’s extremely public failure on Kickstarter triggered the crowdfunding platform to pay for an independent journalist to investigate what had happened, and the Lily drone (probably the biggest competitor from Staaker’s point of view), which was funded to the tune of $34 million, has subsequently been delayed.

I’ve seen a lot of prototypes in my time, and I’d be inclined to give Seeland and the Staaker team the benefit of the doubt; the prototypes we flew for TechCrunch’s video were of significantly higher quality than the ones I usually see as a company is starting its pre-order campaigns. Of course, that doesn’t necessarily mean that the company will be able to adhere to its claimed December shipping date — but solid prototypes and using Foxconn for manufacturing goes a long way to assuage the automatic knee-jerk reaction I have when I hear “drone pre-order campaign.”

The drone is available for pre-order from the Staaker website for $1,200 starting today. Once the company ends its pre-orders, the company says the price will increase to $1,800 or so.

Want to see some more footage of it in action? Of course you do — the company’s launch video is embedded below.

EDIT: A previous version of this article mentioned that Lily was under investigation by Indiegogo. This is incorrect, as the company didn’t use the platform. It is suspected that the campaign in question is fraudulent and set up by a third party.