Pokémon Go users may be furious over the shutdown of the third-party trackers and the recent update that killed the nearby tracking feature in the game, but neither of these issues have stopped the app’s viral spread, it seems. According to new data from App Store intelligence firm App Annie, Pokémon Go hit 100 million installs worldwide this weekend. That’s up from 75 million downloads toward the end of July.

The game had previously reached 50 million Android downloads in record time – 19 days. The next-fastest were Color Switch and Slither.io, at 77 and 81 days, respectively. And Apple reported that Pokémon Go earned the most downloads on the App Store during a launch week ever.

Pokémon Go also reached over $10 million in daily revenues, App Annie said, which prompted it to examine how the game was impacting the daily revenue and app engagement of other top apps and games.

App Annie found that despite users’ lengthy playing sessions and repeat usage, Pokémon Go was having an additive effect on the larger app economy. 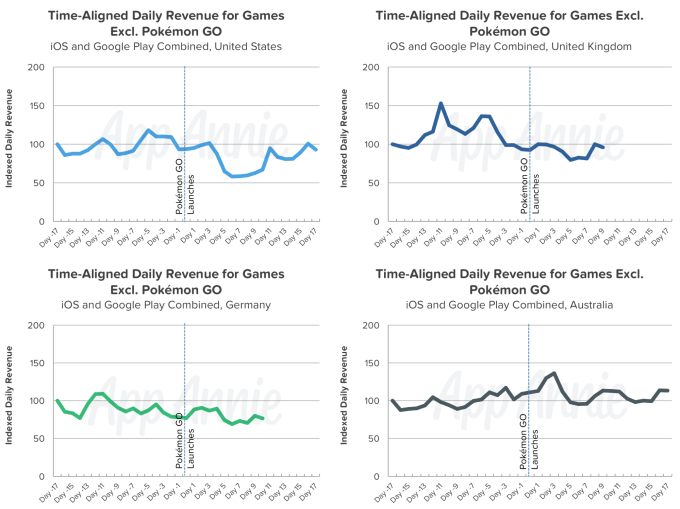 In other words, the game hasn’t had a meaningful impact on the daily revenues of other games on either iOS or Google Play. The daily revenue for other titles saw just a brief dip in the U.S. shortly after the game’s launch, but then returned to normal levels after a few days. Meanwhile, in Australia, there was a slight increase in others’ games revenue after Pokémon Go’s launch. And in Japan, the same metric was within 5 percent of the average level seen over the 10 days before its July 22 launch in that country.

“On the whole, this isn’t particularly surprising as the majority of game revenue comes from a small minority of users and these players are unlikely to be deeply engaged across a multitude of top-grossing games,” reads the report.

One other notable metric is that the average time spent per user and open rate for Pokémon Go surpassed that of Facebook following its Android release in the U.S. App Annie believes that this means Pokémon Go was able to acquire a sizeable chunk of previously “non-mobile” time – that is, people were opening the app when doing other activities, like shopping or walking their dog, for example.

As for the longer-term impacts, App Annie believes that Pokémon Go may encourage other developers to try building AR experiences into their own games. Of course, these may not be on the level of Pokémon Go – that app benefits from years of data and millions of user submissions from players of Niantic Labs’ first AR game, Ingress, App Annie points out.

However, developers may come up with new experiences to tie their games to local businesses, who could pay for increased foot traffic, while businesses may themselves try to host virtual treasure hunts in their stores – something Sears already tried in its app.

In today’s app economy where it’s become harder to get apps discovered and used regularly, Pokémon Go’s most meaningful long-term impact is that it could prompt a new revenue stream for app developers via these online-to-offline experiences they may choose to build.