Chariot, the commuter shuttle company that can transport up to 14 people at a time, just launched a new service for people who work in San Francisco’s residential neighborhoods and may need to get back to a BART stop or Caltrain station at night.

“Now, we’re going to be able to serve a whole new swath of customers,” Chariot CEO Ali Vahabzadeh told me, like firefighters in the Presidio, school teachers in Pacific Heights, hospitality workers, workers at the Jewish Community Center, people who work in the Mission district.

Chariot, which costs about $4 per trip, has 6,000 monthly riders and does about 4,000 rides a day across its 13 original commuter routes. Up until now, Chariot had been driving in the mornings from residential districts to downtown, and returning from downtown to residential neighborhoods empty.

“In transit speak, that’s called dead-heading,” Vahabzadeh told me. “Obviously, it’s a different demand profile. It’s a different customer who is coming from downtown all the way back upstream. So, we’ve taken our time in figuring out what that product looks like.” 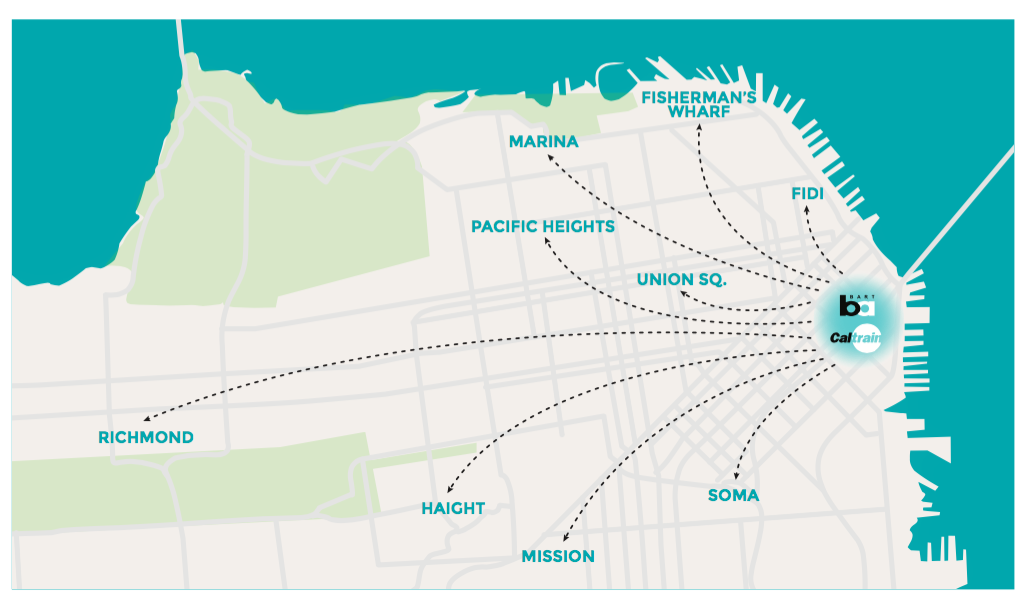 While the current offering includes fixed routes with fixed stops downtown, Chariot’s “dead-head” product lets you get dropped off in a white or yellow loading zone located as close to your final destination as possible.

Chariot Direct is restricted to four drop-offs per trip, which the service determines based on the specific end points riders input. To be clear, the fixed pickup spots for Chariot Direct are the same as the ones in the standard service. I wondered if Chariot Direct might mean that people waiting for a Chariot downtown after work would have to wait longer to get picked up, but Vahabzadeh said that it shouldn’t be a problem.

“As popularity of Chariot Direct goes up,” Vahabzadeh said, “it may take a little longer to get the loop back because now we’re picking up and dropping off customers, so we just add Chariots to the route to equalize it or improve it.”

“That could be anything like helping serve the hospitality industry Thursday, Friday, Saturday nights,” Vahabzadeh said. “It’s very difficult for San Franciscans working in night life and hospitality to get a ride home at one in the morning, so that’s an area of mutual cooperation. Obviously, our Chariot’s are idle at midnight and it probably doesn’t make sense for MUNI to run these huge busses to carry 10 people at a time. Chariot can do that much more efficiently.”