As promised, Republican Presidential nominee Donald Trump hit Reddit tonight for a spirited  — though not on the official /IAmA subreddit — AMA. The session was light on policy specifics, but the candidate (also casually referred to as “God Emperor” by some participants), managed to answer 13 questions on topics ranging from NASA (pro) to media bias (against), three more than President Obama offered in his own AMA back in 2012.

The AMA, which unfolded the same evening both the President and Vice President were set to take the stage at the Democratic National Convention (and prior to him taking the stage at his own rally in Toledo), was tightly vetted by the page’s moderators, who announced beforehand, “Yes, the AMA will have tons of removed comments. That’s sort of a mark of pride for us.”

After showing up to his own party fashionably late (by fourteen or so minutes), the Real Donald Trump kicked things off with a couple of softballs, responding to two questions in a five-part series, coming out strongly against voter fraud but supportive of NASA and space in general.

Asked to respond to concern that Clinton will “try and steal this election through vote fraud,” Trump responded, “Voter fraud is always a serious concern and authorities must be vigilant from keeping those from voting that are not authorized to do so.” 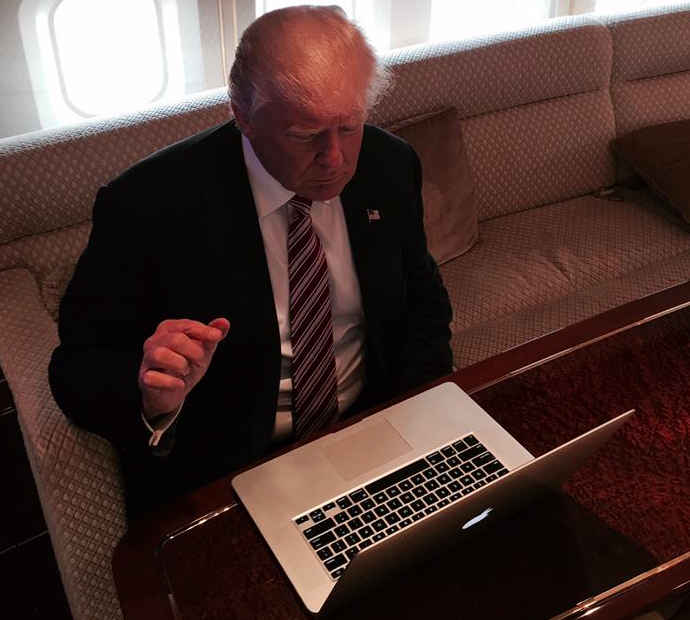 Asked by the same Redditor the role NASA should “play in helping to Make America Great Again,” he responded with, “Honestly I think NASA is wonderful! America has always led the world in space exploration,” echoing similar comments by Peter Thiel, whose recent Republican Convention address took issue with expenditures on war rather than space exploration, stating, “Instead of going to Mars, we invaded the Middle East.”

While unequivocally pro-NASA and America, Trump’s response was decidedly less detailed than Obama’s answer to a similar question on his own AMA:

Making sure we stay at the forefront of space exploration is a big priority for my administration. The passing of Neil Armstrong this week is a reminder of the inspiration and wonder that our space program has provided in the past; the curiosity probe on mars is a reminder of what remains to be discovered. The key is to make sure that we invest in cutting edge research that can take us to the next level – so even as we continue work with the international space station, we are focused on a potential mission to [an] asteroid as a prelude to a manned Mars flight.

Trump’s next response was somewhat more measured. When one Redditor raised concern about media consolidation and sensationalism, the candidate condemned general bias while praising “new media,” saying, “I have been very concerned about media bias and the total dishonesty of the press. I think new media is a great way to get out the truth,” a clear nod to the candidate’s embrace of online platforms such as Reddit and Twitter that present lines of communication outside of traditional media channels.

After this slow ramp up, the Republican nominee was off the to the races.

As to what the candidate plans to do in order to help lessen money’s influence on politics, Trump once again responded in straight forward fashion, stating emphatically that he would “[keep] Crooked Hillary Clinton out of the White House!”

Asked a similar question in his 2012 AMA, the President answered,

Money has always been a factor in politics, but we are seeing something new in the no-holds barred flow of seven and eight figure checks, most undisclosed, into super-PACs; they fundamentally threaten to overwhelm the political process over the long run and drown out the voices of ordinary citizens. We need to start with passing the Disclose Act that is already written and been sponsored in Congress – to at least force disclosure of who is giving to who. We should also pass legislation prohibiting the bundling of campaign contributions from lobbyists. Over the longer term, I think we need to seriously consider mobilizing a constitutional amendment process to overturn Citizens United (assuming the Supreme Court doesn’t revisit it). Even if the amendment process falls short, it can shine a spotlight of the super-PAC phenomenon and help apply pressure for change.

The Donald, unsurprisingly, invoked his opponent, nickname and all, several more times during the AMA, telling a questioner that his immigration policy as outlined on his website (TLDR as per the AMA) is “the exact opposite of Crooked Hillary Clinton.” He also, naturally, made reference to Clinton’s ongoing e-mail woes and Benghazi. When asked why Secretary Clinton, “refus[es] to hold any press conferences for such a huge amount of time?” Trump responded,

Crooked Hillary Clinton will not do press conferences because she cannot explain her illegally deleted 33,000 emails, or her disaster in Libya, or her role pushing TPP (which she would 100% approve if she got the chance), or her support for a 550% increase in Syrian refugees, etc.

Trump noted his plan to “repeal and replace disastrous Obamacare” with an “amazing new plan” to be revealed at a later date, before praising, “our nation’s amazing police” and giving a shout out to presidents George Washington, Abraham Lincoln, Dwight Eisenhower and Ronald Reagan, “all of whom I greatly admire.”

Trump closed the session out in typical Trump fashion, with the candidate imploring Redditors, “Together, we will Make America Great Again.”