Let’s start with the obvious: Star Trek Beyond is a pretty good movie, but it doesn’t quite make it into the top tier of Trek films like The Wrath of Khan, The Undiscovered Country and First Contact.

Beyond, which opens today, starts with the crew of the Enterprise in the middle of its five-year, deep space mission. This is exactly what Captain James T. Kirk (played by Chris Pine) asked for at the end of Star Trek Into Darkness, but now he’s complaining that things are starting to feel a little “episodic,” and he’s wondering about the point of it all.

This could be the promising setup for a Trek that’s meditative, character-driven and kind of meta — an attempt to redefine the franchise as it celebrates its 50th birthday. A few minutes later, however, a swarm of ships smashes through the Enterprise’s hull, and our cast is left scattered across the surface of a mysterious planet.

From that moment on, the bigger questions are pretty much swept off the table in favor of action, action and more action. 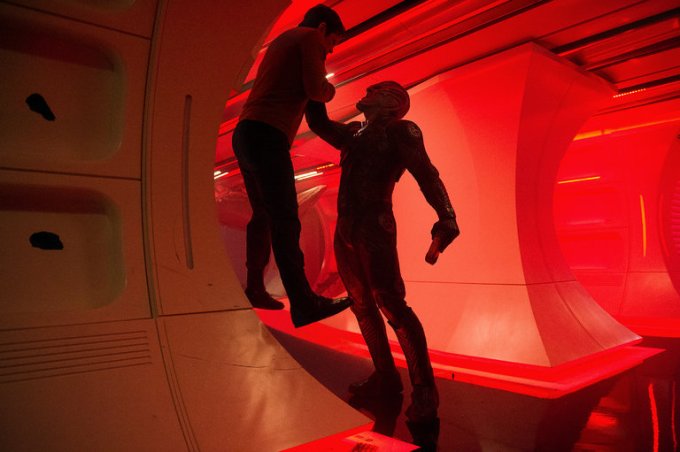 This didn’t bother me as much as I expected. Sure, I miss the more cerebral incarnations of Star Trek. But if, post-J.J. Abrams, Trek movies have to stick with the Hollywood blockbuster template, then at least the action is entertaining. In his four (!) Fast and Furious films, director Justin Lin already demonstrated that he knows how to transform silly ideas into set pieces that are spectacular and thrilling, and he doesn’t disappoint here.

So no, I’m not really sure why Kirk ends up speeding through the enemy base on a motorcycle, and I can’t explain why the final confrontation takes place in a ridiculously complicated-looking airlock. But I didn’t mind, because there were other moments when I was smiling so hard that my face could have split open.

And even if the script by Simon Pegg and Doug Jung goes heavy on spectacle, it’s a significant step up from the past two films. For one thing, it manages to avoid any aggressively dumb moments. And where Star Trek ’09 and Into Darkness seemed intent on repeating, tweaking or at best reinventing what we’d seen before, Beyond directs the franchise outward.

The movie includes plenty of winks and nods to the past, but they don’t overcrowd the story, which is busy introducing new worlds, new civilizations and new characters. (Also, by revealing that John Cho’s Sulu has a husband, it finally includes a gay character on the bridge of the Enterprise). 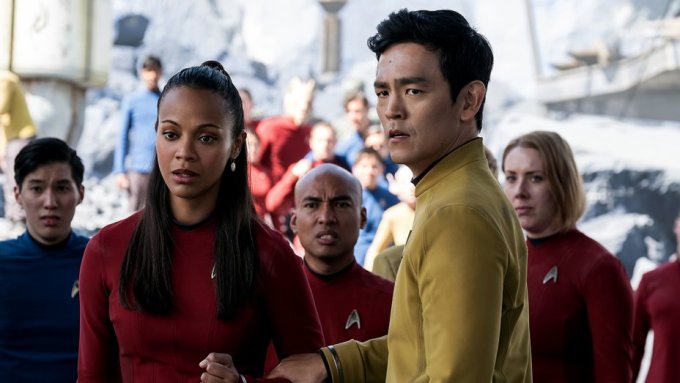 Perhaps the most important difference is a subtle one. In the last two movies, despite the fate of Earth continually hanging in the balance, the world felt awfully small, almost claustrophobic. The Enterprise zipped across the galaxy in a matter of minutes, as if the crew was just commuting across town. You could sense the hand of fate (a.k.a. the screenwriters) manipulating events to push the characters into their appointed roles. It was almost Star Wars-y, the way stories set in the vastness of space still boiled down to the domestic drama and person-to-person combat skills of a few special people.

Contrast that with Star Trek Beyond, where the universe feels big again. By insisting on both the danger and the excitement of exploring the frontier, the movie convinces you that there are plenty more planets to discover, plenty more adventures to be had.

That’s why, when Kirk concludes that being the captain of a starship is just too much damn fun, you’ll find yourself in enthusiastic agreement.

“Fun” might seem like a bit of a letdown for a franchise that’s been associated with big ideas and progressive social change, but in a summer of bad news in the headlines and recycled ideas in the theater, we can’t take it for granted. At the movie’s end, when the crew sped off once more towards the final frontier, I felt grateful that they were still boldly going.