Google has begun to further tap into the power of the crowd in order to improve its Google Maps application, the company announced this morning. This is being done through the introduction of a number of features that will allow users to more easily share location details, as well as confirm edits suggested by others. Many users had already seen these changes rolling out, but today Google is making them official – an indication that the broader rollout is completing.

While Google says that it makes “millions” of updates to Maps every day, it’s still not enough to ensure that every location has the most accurate, detailed information. That’s why it’s turning to users to help it improve the mapping service.

The company has expanded users’ ability to both add missing places to Google Maps or correct business information through its Google Maps iOS and Android applications, as well as in Google Search. You may have already noticed options for “Suggest an Edit,” or “Add a Missing Place,” for example, which allow you to make your contributions. 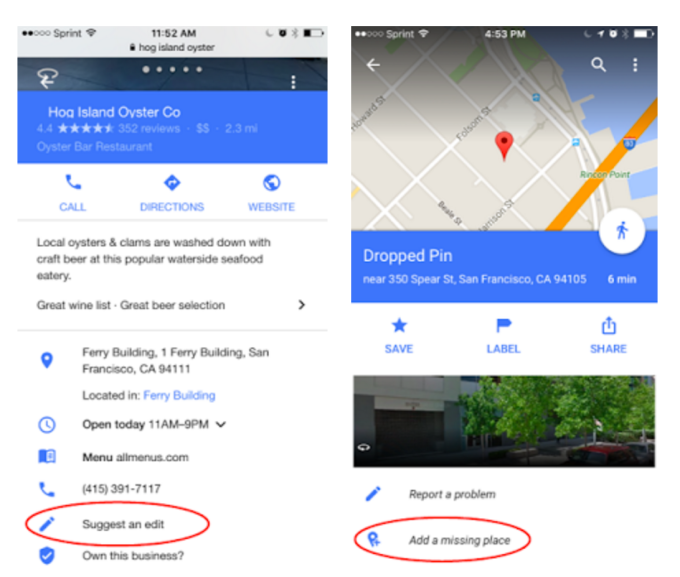 Those edits don’t immediately go live, however, as one user’s input alone isn’t enough to determine the edit’s accuracy.

Instead, Google Maps will pop up notifications when there’s a place with a pending edit, informing you that “Someone suggested new info.” When you tap through on that notification, you can verify the edit. When enough people verify the same information, it’s then published to the map. This option, however, is only available on the Android version of the Google Maps app for now, along with mobile Google Search on both iOS and Android.

The company is also working to collect more information about businesses that go beyond the basic factual details like the address or store hours.

Today, Google Maps is also used for discovery of places to visit – including restaurants, in a way that’s competitive with Yelp. Google has been building out its restaurants feature set for some time now, helping people find the best spots to dine based on factors like time of day, price, menu offerings, ambiance, and more.

Now Google Maps app will also allow anyone to contribute their knowledge of a given venue by tapping on descriptions for the place, like whether it offers “happy hour drinks” or has “healthy” or “vegetarian” options on the menu, for example. This third feature is only available on Google Maps for Android in addition to Google search on mobile.

This isn’t the first time Google has leveraged crowdsourcing to improve and expand its collection of business data. Last year, it began rewarding its “Local Guides” with perks and offers for regularly reviewing businesses, as well as editing, correcting and providing business information.

Since that time, it has been broadening the scope of those crowdsourcing efforts to include regular users as well. With over a billion users, Google Maps has a sizable user base who can now become editors, if they choose. If you haven’t already seen these options appearing in Google Maps or Google Search, you should soon.