Lookup, an India-based chat service that connects consumers to local business and is backed by some notable U.S. investors, has been acquired by business discovery service NowFloats, which is also based in India. The undisclosed deal is a mixture of cash and stock, and Lookup said it will continue to operate independently.

The company is focused on tapping the explosion of messaging and mobile internet to bring the long-tail of local retailers online. Many people already use WhatsApp to connect with local retailers they know, and Lookup sought to formalize this in India — the largest WhatsApp country on the planet — by building a directory to let you connect with stores via chat. 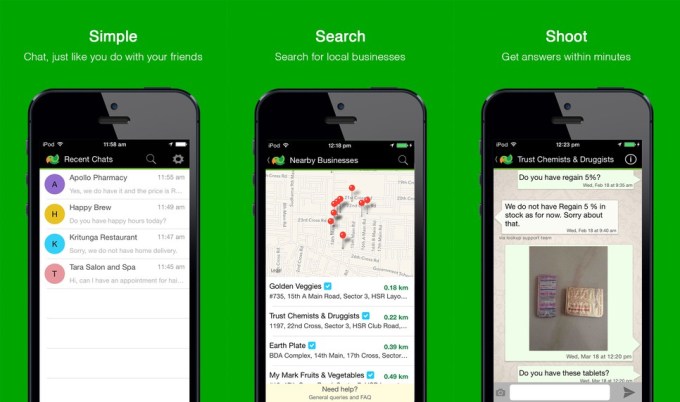 Lookup claims 90,000 businesses on its platform and some 1.2 million users. Ultimately though, CEO and founder Deepak Ravindran told me that it was most logical to find a partner than continue to plod along alone for two big reasons.

Firstly, there’s been a major shift away from hyper local services in India. Well-funded startups like PepperTap, Grofers and TinyOwl have this year scaled back on ambitious expansion plans and pivoted as VCs showed a reluctance to continue to fund business with high cash burn and a long window to profitability.

Second, Ravindran said also that WhatsApp’s announcement of plans to introduce business accounts sometime in the future added another challenge.

“We attracted investment [last year], but this year turned out to be tougher for hyper local companies,” he told me over the phone. “What would be right strategy? It takes a look of time to build a network. If traditional VCs are not interested in the game, we wanted to find strong partner to give us the independence to grow on the right track.”

NowFloats is a platform for local businesses in India. It claims to have over 250,000 participating retailer partners and, having been focused on the desktop web, it sees Lookup and its mobile focus as wholly complimentary. Likewise, with discovery on NowFloats centered around search, CEO Jasminder Singh Gulati is keen to embrace chat as a medium.

“Over the past year, NowFloats has conducted three research sprints across India (that includes driving across the country and meeting people), and it was clear that chat is one of the most pervasive behaviors’ followed by search and apps,” he wrote in a blog post.

The two companies will remain separate but Ravindran said there are obvious areas where they can work together, for example on retail partners and users. He’s aiming to develop Lookup so that chat accounts for 10-15 percent of NowFloats’ traffic — it is currently at around two percent, he said.

It seems like we can expect more consolidation like this in India this year with investors tightening belts. That’s for the lucky companies though, those who can’t find the right partner might be forced to close down altogether.