How about some mobile games news that isn’t about Pokemon Go?

Lima Sky has committed to launching an e-sports league and new edition of their wildly popular Doodle Jump mobile game, according to the company’s Chief Operating Officer Matt Turetzky.

Lima Sky, which was founded seven years ago, has amassed 200 million unique downloads for its Doodle Jump games across every platform. Today, Doodle Jump sees 10 million monthly active users, making its reach comparable to that of top e-sports like Counter-Strike: Global Offensive (CS:GO).

Immersive titles like CS:GO, or League of Legends and Dota 2, helped prove that video games could be played on a professional- and league-level by sponsored players, and even for college scholarships.

But Doodle Jump is one of, if not the, earliest casual game brands to attempt to extend itself into the nascent e-sports market. And sessions on Doodle Jump are shorter than any of those titles, just two or three minutes on average.

Skillz’s technology acts as something of a digital referee, ensuring players of like skill are matched up on level digital playing fields. And Skillz facilitates game play for cash bets or prizes, checking ages of players and handling transactional and regulatory matters.

Lima Sky’s Turetzky said: “Our games have always been about competition in that people wanted the highest scores and to see their names on the leaderboard…But we’re a small company with a well-known brand. And didn’t want to spend our resources building out infrastructure to support multiplayer gaming.”

Turetzky believes that increasingly, gamers who play titles in every genre are seeking skill-based matching, not just to play friends and family. And they want to play for prizes, recognition and to broadcast their game playing activity live on platforms like YouTube and Twitch. 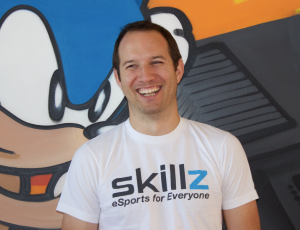 Lima Sky’s move follows larger video game publishers like EA and Activision creating e-sports divisions in the last two years, after seeing the success of Riot Games‘ League of Legends, Valve and others.

Skillz’s CEO Andrew Paradise said Doodle Jump is the first “iconic IP” that his company has worked with so far.

He believes that the addition of “pick-up-and-play” games to e-sports will fan the flames of the player versus player, competitive trend.

“A lot of games have become as popular as some of the biggest sports in the offline world but do not have a competitive dynamic built in– the refereeing, the online tech, and systems for recording statistics and broadcasting,” Paradise said. “We’re building e-sports for everyone.”

The companies did not disclose an exact date for release of the new Doodle Jump game. However, Turetzky confirmed that Lima Sky intends to release it before the end of this year.