We’ve heard a lot about troubles in the marketplace lending space over the last couple months. LendingClub, the industry bellwether, ousted its founder-CEO and revealed it is under federal investigation. Its stock has plummeted, contributing to a steep fall for shares of small business lender OnDeck.

Add in layoffs at P2P rivals Prosper and Avant, a postponed IPO and litigation for consumer lender Elevate Credit, and a U.S. Treasury Department report hinting at a need for more regulation, and it’s clear why investor enthusiasm for marketplace lending would be diminishing.

So where are things going? Funding activity has slowed in recent months, and private valuations look ripe for reductions. A key driver will be falling public market comps.

At CrunchBase, we took a detailed look at U.S. companies in the marketplace and alternative lending space that have raised $20M or more in private investment. The analysis (see full chart below) shows a total of $3.9 billion in venture and growth-stage investments in the industry, the vast majority in the past three years. Companies raised an additional $2 billion in debt financing, also mostly in the past three years. 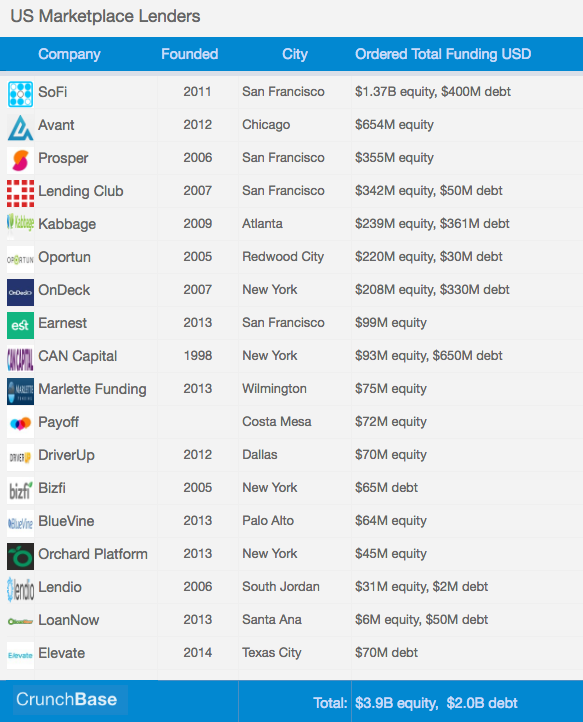 That said, while we can expect down rounds near-term, it’s not clear VCs will lose their shirts in marketplace lending forays, particularly those who were mid- or early-stage investors.

One reason is that venture and growth investors appear to be majority shareholders in alternative lending businesses, based on public filings by a few companies. Just before LendingClub’s public offering, for instance, the company’s six largest VCs owned 63% of shares. At OnDeck, the seven largest VCs owned more than two-thirds of shares pre-IPO.

High VC ownership levels mean that even a lackluster exit could return all or more of invested capital. Even after LendingClub’s stock plummet, for instance, VC’s post-IPO stakes would be worth more than the $392 in disclosed investments before going public.