Apple just released the second iteration of its iOS 10 developer beta. This update is only available to iOS developers with a developer account — at least for now. Apple unveiled iOS 10 at its annual developer conference.

Apple should also be releasing the second beta of macOS Sierra in just a few minutes once the company updates its developer website. Once again, this beta is just for developers. But if you want to learn more about Sierra, read our preview.

Like in previous years, Apple released the first iOS 10 and macOS betas right after the WWDC keynote so that developers could start playing with new APIs during WWDC. Apple expects to release the final version of macOS Sierra and iOS 10 for iPhone and iPad in September.

Today marks the first update for developers, and there will be many more over the summer. But what if you’re not a registered Apple developer?

You’re in luck — Apple plans to release a public beta to everyone so that early adopters can get their hands on new features and iron out the bugs. The first public beta is expected to be released in July. In fact, Apple could release the second developer beta as the first iOS 10 public beta if the company doesn’t notice any major bug over the next couple of days.

iOS 10 features a massive Siri update with third-party integrations. While it’s going to be hard to see the end result during the beta as third-party developers haven’t released iOS 10 apps yet, it could have a big impact on the way you use your iPhone.

Apple has also unveiled a completely redesigned lock screen with rich notifications that can display tiny live widgets. You can access the same widgets with 3D touch shortcuts on the home screen.

Finally, the company is overhauling the Messages app with many, many new features — an emojify feature, message effects, Slack-like feedback on messages, rich link previews and third-party extensions. This Messages update alone will make iOS 10 a must-have for every iPhone user. 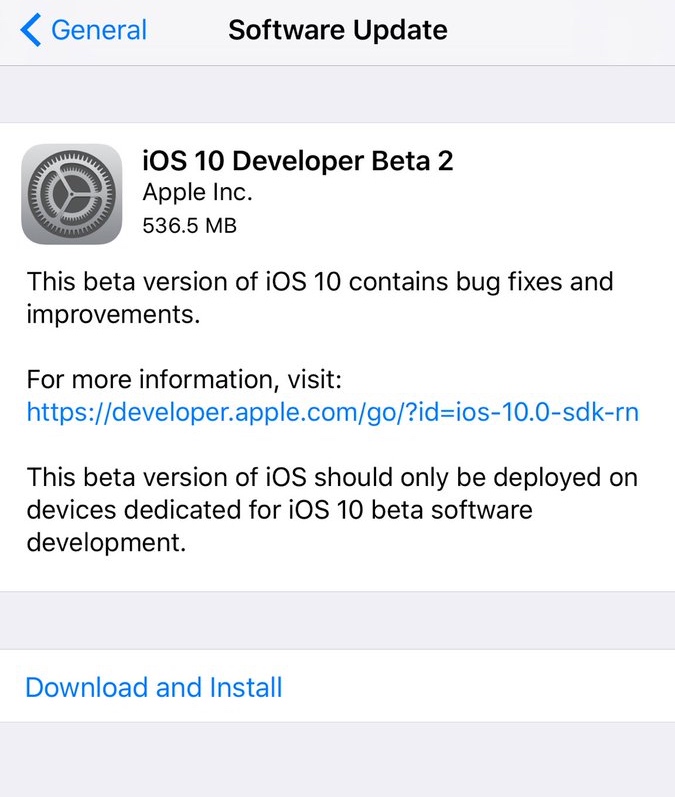