Even though printing photos is no longer the only means of viewing and sharing them with others, people still often want to do something more meaningful with these images — especially those of their family and children — than simply sharing them via ephemeral social media posts. A new application called Storyboard, launching today from the Disney-backed startup Twigtale, aims to help. The app offers pre-made templates and suggestions that you use to turn photos into stories you can share, or that become printed photobooks.

Twigtale was originally founded by childhood friends Nishad Chande and Carrie Southworth. The idea was prompted by Chande’s frustration with using Shutterfly to create a personalized photo book. After staring at a blank page with no idea which pictures to use or what to say, the book took hours to create. Thus, Twigtale was born.

The company already offers a variety of photobook templates, like “World’s Greatest Dad” or those for young children like “I Am A Girl” or “I Am A Boy,” among others.

The new Storyboard application uses the same content personalization technology, but puts it into a mobile form factor. The app not only offers templates, but also recommends the photos to capture and post and offers text prompts that you can edit. This, the team believes, is easier for people to work with than a blank slate.

For example, some of the included templates in the new app are “Family Trip” or “Graduation,” to give you an idea of how Storyboard may be used. 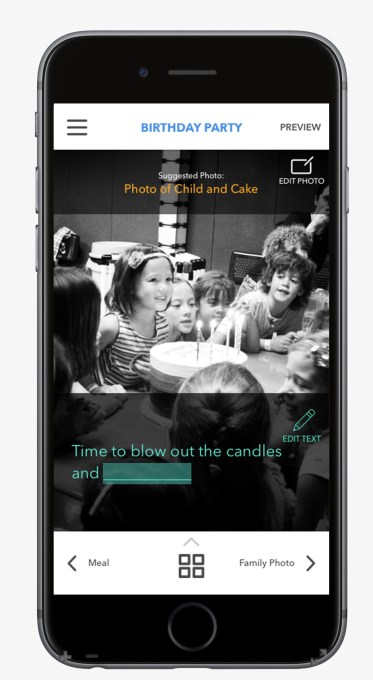 After you load the templates with your own photos, you can then share the story digitally, or you can turn the story into a hardcover (9″x9″) or softcover book (8.5″x8.5″) for $29.99 or $19.99, respectively. The titles on the books are printed with a glossy finish, and templates are 24 pages. You can add, delete and rearrange pages with a maximum of 36 pages allowed, or a minimum of 8.

There have been a number of startups focused on “story creation,” and one of the better entries in this space more recently, Storehouse, just shut down. Twigtale believes it’s different, however, because it’s trying to be more than a tool for collage-style albums — it wants to help with the actual storytelling itself, including helping guide the sequence and narrative. Plus, its business model relies on the upsell of the physical goods.

L.A.-based Twigtale is a team of seven and has Disney’s investment thanks to its participation in the company’s accelerator program back in 2014.

The app is a free download on the iTunes App Store.