Apple has been looking at ways to extend the control power of stylus input methods, patenting a touch sensitive stylus which could allow for users to manipulate on screen objects depending on how and where they place their fingers on the stylus shaft itself.

The patent, spotted earlier by AppleInsider, was first filed in December 2014, before Apple had its own stylus in the market. Cupertino announced the Apple Pencil in fall 2015, offering a finer-grained interface option for users of its iPad Pro.

The pressure and tilt sensing Apple Pencil is targeted at creatives wanting to achieve pixel-precision on a touchscreen vs poking and hoping with a finger. And also for an enterprise demographic likely to be interested in the more powerful and larger iPad Pro — flagging up the utility of a stylus for annotating documents, for example.

Adding even more fine-grained controls to the Apple Pencil would mesh with the creative/pro demographic at which Apple is targeting the Pencil/iPad Pro. Especially as the stylus does not work with the broader spectrum of iPad or iOS devices — remaining firmly in the professional tool niche where the iPad Pro sits.

In the patent, which is called Stylus With Touch Sensor, Apple notes one example of how an array of touch sensors that are capable of accurately determine finger location and action on a stylus shaft could be useful in supporting advanced device interactions — such as the ability to detect that a user is rotating the stylus. Which in turn could be applied to rotate an onscreen object. Or to perform another control action like selecting brush size in a drawing app or controlling system UI parameters such as the zoom level.

It’s easy to imagine graphics artists benefiting from control shortcuts they can perform right from the Apple Pencil in their hand, without having to tap through lots of on screen menus. Another cited example of potential utility is being able to run a finger down the touch sensitive stylus to scroll through a menu.

Of course Apple patents a continual pipelines of ideas and possible future techniques, the vast majority of which never make it into shipping products. Patents can also be filed defensively, as hedges against rivals’ R&D. But they can still be an interesting indiction of a company’s thinking.

The challenge with adding more sensors to support additional controls is the risk of amping up the complexity of the user interface. So while sensor technology could enable a stylus that can do a lot more than just let you scribble creatively on a touchscreen, implementing such a fine-grained touch/gesture UI into a piece of hardware would require a steep learning curve for users. Which in turn might stay Apple’s hand here. Or at least see it scale back any touch options it does decide to introduce in future.

In a second patent, filed around the same time as the stylus sensor patent, Apple describes a method for automatically switching the interface on a smartphone-style device based on which hand it’s being held in — so shifting the location of icons and buttons to make them easier to reach — that’s also based on using an array of sensors embedded into the hardware. 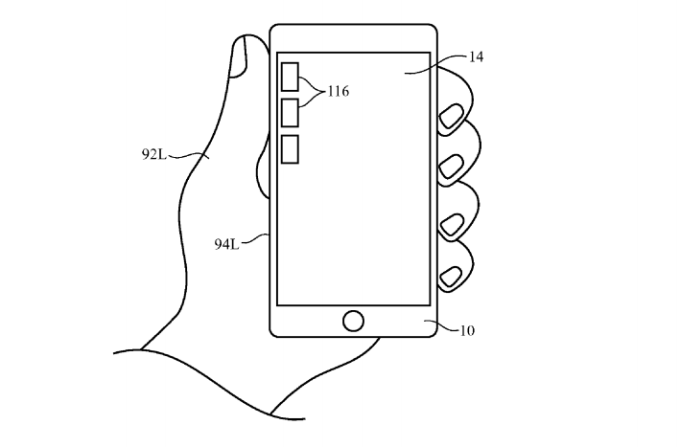 So expecting future gadgetry to have at least a little more touch sensitivity to help boost its utility does seem a pretty safe bet.