SoundCloud is launching a new feature that aims to help its users find new tracks and artists they’ll love, based on their activity and listening history. Called “Suggested Tracks,” the addition is essentially SoundCloud’s attempt at personalizing the service to its individual users in order to keep them engaged and listening to more music and audio content in the app.

Today, it’s not enough for streaming music services to compete on pricing, user experience and exclusives, they’re also continually trying to one-up each other when it comes to being the better option for introducing their users to new music they’ll like, too.

This can be a huge selling point for the service in question, when done well – for example, Spotify’s Discover Weekly playlists have seen 40 million unique users since launching last July, and 5 billion tracks streamed, the company recently touted.

In SoundCloud’s case, its “Suggested Tracks” section will be powered by users’ listening history on the service, combined with your “likes.” What makes this different from Spotify’s popular Discover Weekly playlist, however, is that SoundCloud’s algorithm continually updates these suggestions as you use the service. That is, instead of a playlist, this section is refreshed as you continue to listen to music and interact with the service. 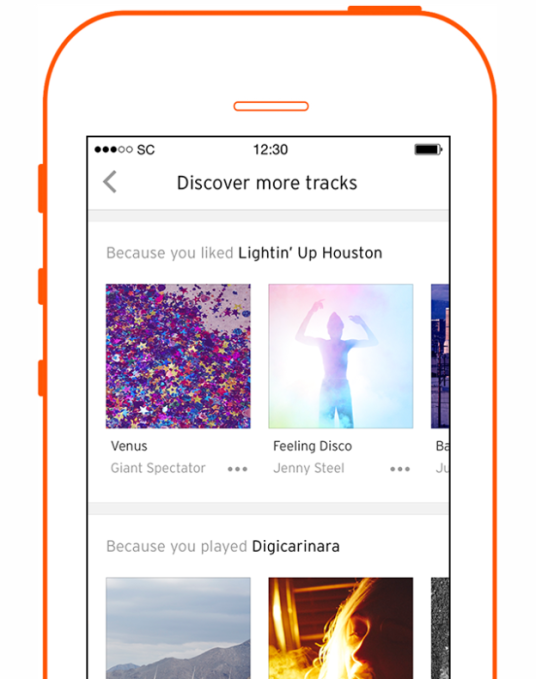 This makes Suggested Tracks more akin to Spotify’s Discover section, where it offers suggestions under banners that read: “because you listened to…” followed by an artist’s name.

Like Spotify, SoundCloud’s suggestions will also explicitly be tied to a particular song or artist you’ve just played or liked and will even be prefaced with a similar introduction (“Because you played…” or “Because you liked…”, e.g.). A list of other items, presented with thumbnail images, can then be scrolled through underneath.

To access the new feature, you’ll head to SoundCloud’s Discover tab on the web or the Search section in the app. If you’ve already been listening to music on SoundCloud, you’ll have suggestions waiting.

If not, you’ll need to begin streaming music and audio to train the app on your interests.

Suggested Tracks is live now on iOS, Android and web. SoundCloud says it will introduce other music discovery features in the weeks ahead – a hint that it might come out with personalized playlists of its own.