The stress of running a startup guided founder Yunha Kim to her next idea: a mindfulness app called Simple Habit, offering audio meditations as short as five-minutes so that busy people can squeeze a little tranquility into their day.

Kim, who sold her prior startup — an Android lock screen app called Locket — to mobile shopping startup Wish last summer, has been bootstrapping the new project, with the team building on iOS starting in February and soft-launching in beta in May.

The app offers a basic wheel of audio-guided five-minute meditations for specific scenarios, like having a tough day or needing to get a good night’s sleep, along with a fuller library of mindfulness content uploaded by the teachers on its platform — divided into topics like stress, personal growth, kindness, relationships and work. Content here can be longer. It can also be filtered by teacher should you wish to listen to the same voice.

The app has around 10,000 users at this nascent stage, garnering some early eyeballs after being featured by Apple on the App Store this month. It’s officially launching out of beta today, joining a raft of other apps promising the convenience of guided meditation on your smartphone — e.g. Headspace, Calm and Pause, to name just three. Some of the startups in this space have also raised considerable capital (Headspace raised $30 million last fall).

Add to that Apple also announced a relaxation-focused app for the Apple Watch called Breathe at WWDC earlier this month.

But despite some well-formed and weighty competition, Kim is gunning to go big — with her aim being to build out a platform for meditation and mindfulness.

She claims Simple Habit is the first mindfulness app to apply a Netflix/Spotify style model to the space. So rather than having just one or a handful of teachers offering meditation content within the app, there are multiple teachers (currently around 30) — the idea being to prevent the content from becoming stale over time, and thus keep people renewing their subscriptions.

Subscriptions for Simple Habit cost $3.99 for a week’s access, $11.99/month and $99.99/year. There is also a freemium element whereby downloaders can get a free week-long trial, giving access to a sub-set of the content (including introductory courses and specific meditations for different times of day, states of mind and circumstances).

“We’re the first app with a Netflix/Spotify model — we introduce dozens of leading meditation teachers from around the world onto one platform,” she tells TechCrunch. “It’s like how Spotify consolidates all artists into one platform. Our competitors Headspace and Calm for instance only have one teacher each, so the novelty can wear off very quickly.”

The startup does not currently have any plans to raise funding, says Kim, but she concedes it is “one of the strategies” open to it, given the competitive nature of the space. Although it’s clearly hoping to be taking revenue quickly, too.

Kim won’t break out the proportion of paying users at this early stage but adds: “We are seeing higher free to paid conversion rate than what we expected to see.”

Simple Habit is also differentiating by offering even more bite-sized guided meditations than its main rivals, with its five-minute format aimed at enabling the widest range of super busy people to be able to find space for it in their schedule. (Albeit, you’re probably going to be spending less time being mindful per session — but arguably some meditation is better than no meditation, and five minutes a day might also encourage a person to build out a more sustained habit over time).

“We’ve designed the app specifically for busy people,” says Kim. “People that don’t have much time to meditate. We wanted to make it super simple for them to get started so they can mediate whatever they are doing (like right before a presentation, interviews, etc). So we happen to attract a lot of busy young professionals. That’s also why we have meditations for entrepreneurs, lawyers, college students (in the work session).

“During beta, we’ve heard from entrepreneurs that are reducing stress using Simple Habit, even a surgeon who is using Simple Habit right before performing a surgery on a patient, people that have sleep/stress/anxiety problems, and even college students that are using this especially while they prepare for exams.”

There’s a revenue-share model to pay the teachers using Simple Habit’s platform, which Kim also describes as “similar to Spotify” in that it’s sharing a portion of annual net revenue with the teachers. But, of course, it has far fewer teachers to split revenue with versus Spotify’s millions of artists. Teachers own their content, except where the startup pays them to create some specific content for the app.

In terms of the flow of new content onto the platform, Kim says there is no set schedule for how often teachers are adding content, but anything new in the library is badged with a pink tag to flag it to users.

“We are also constantly interviewing, vetting, and bringing onboard the best of the teachers out there. Many of these teachers teach mindfulness at tech startups,” she adds, noting that one of the team, Kelly Boys, was the former director of Google’s mindfulness program, called Search Inside Yourself (SIY).

“She’s in charge of recruiting teachers. That’s why you see a lot of our teachers on our platform were trained through Google’s SIY program. We have 30+ teachers from all over the world… We have quite a bit of rigid vetting process. Not all of the recordings submitted by our teachers pass our standard.”

Discussing the design thinking behind the app’s interface, Kim says the idea was to strip away some of the more complex theory/nomenclature that can be used by meditation practitioners so that newcomers aren’t alienated by unfamiliar concepts (like ‘opening chakras’). Instead they are pointed to practical suggestions to help with whatever they are feeling that day. 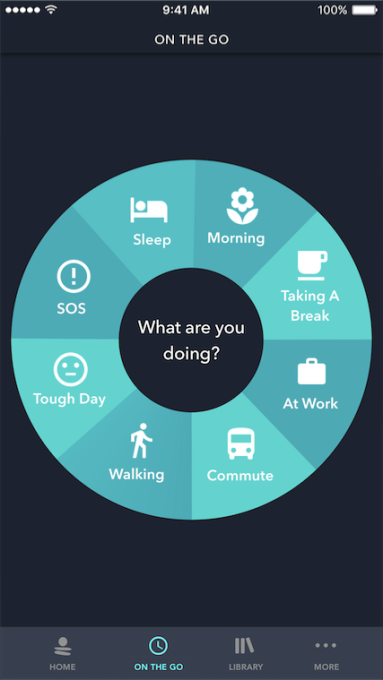 “Our app’s approach is based on goals/things you want to improve. Kinda like Advil/painkiller approach so that busy people can wrap their heads around what they are doing by meditating to this specific track (also a great way to set an intention),” she adds.

While the benefits of mindfulness/meditation are generally widely accepted these days, with most people agreeing it’s a sensible approach to combating stress and emotional distress, the more pressing question might be why do people need an app just to sit quietly for a few minutes? Can’t they just do that by themselves, say by turning their phone off for a bit?

Kim’s response to this critique is to argue that newcomers to mindfulness will benefit from guided meditation — to help them build the habit and learn skills like breathing techniques that could later enable them to tune out on their own.

“I’ve been meditating for a couple years now, but I still always use guided meditations because I get exposed to new concepts, I feel like I’m being accountable to someone, I also build an attachment/relationship to the guided voice over time,” she adds.

Other features of the app include letting users set up a daily reminder to be mindful, along with some lightweight analytics to chart progress — with the app recording how many sessions and minutes a user has clocked in total, along with how many days in a row they’ve kept up their habit.

Kim says a website app is planned next, along with an Android version of Simple Habit.