macOS Sierra is Apple’s latest version of its operating system for the Mac. While the final version will only be available in the fall, I’ve been playing around with the first beta for the past few days. In addition to changing the operating system’s name from OS X to macOS, Apple is introducing a few nifty features. So let’s take a look at them.

Let’s start with the name. My theory is that Apple named its new version “Sierra” as it sounds a bit like “Siri.” That’s right, the big blockbuster feature of the new version is Siri. For the first time, Apple’s personal assistant is making its way to the Mac.

Siri sits in the menu bar and dock. In order to trigger it, you have to click on the dock icon or the menu bar icon. You can’t just say “Hey Siri” to your Mac, nothing will happen. But the good news is that you can set up a keyboard shortcut (such as Fn + Space) to trigger it just like Spotlight.

Two icons seem a bit redundant, but you can delete the icon from your dock, your menu bar or both. In my testing, Siri works just like you’d expect. You can ask for the weather, NBA scores, sending a text or a word translation.

In addition to these familiar features, Apple has baked a few nifty features in. Siri can replace a bunch of Spotlight’s features. So if you’re looking for a file, for example, you can search for it using your voice. Siri results can be pinned to the Today view in the notification center. And you can also disable Wi-Fi, turn up the volume and get information about your Mac using Siri.

The second big change in macOS Sierra is the Photos app — and one feature in particular: memories. Memories auto-compile your photo stream into albums. An album can be a week of vacation at the other side of the world, for example. Apple uses geolocation, computer vision and dates to generate these albums.

Then, the Photos app will show you all the people in the album, a map and related memories. This sounds great on paper, but isn’t working properly with my photo library and this first beta — it’s a beta after all. Another nifty side effect of the memories is that you can search for objects and people. Searching for “sea” returns some sea photos from my library, but not all of them.

Over the years, Apple has added tabs to various apps. Safari, Finder and Terminal all support tabs. This year, Apple is going all in and adding multi-tab support to all apps that let you open multiple windows. So, for instance, in TextEdit, Pages, Mail or Maps, you can now open multiple tabs. There’s not much else to say; it works as expected. Tabs behave exactly like the tabs in Safari. 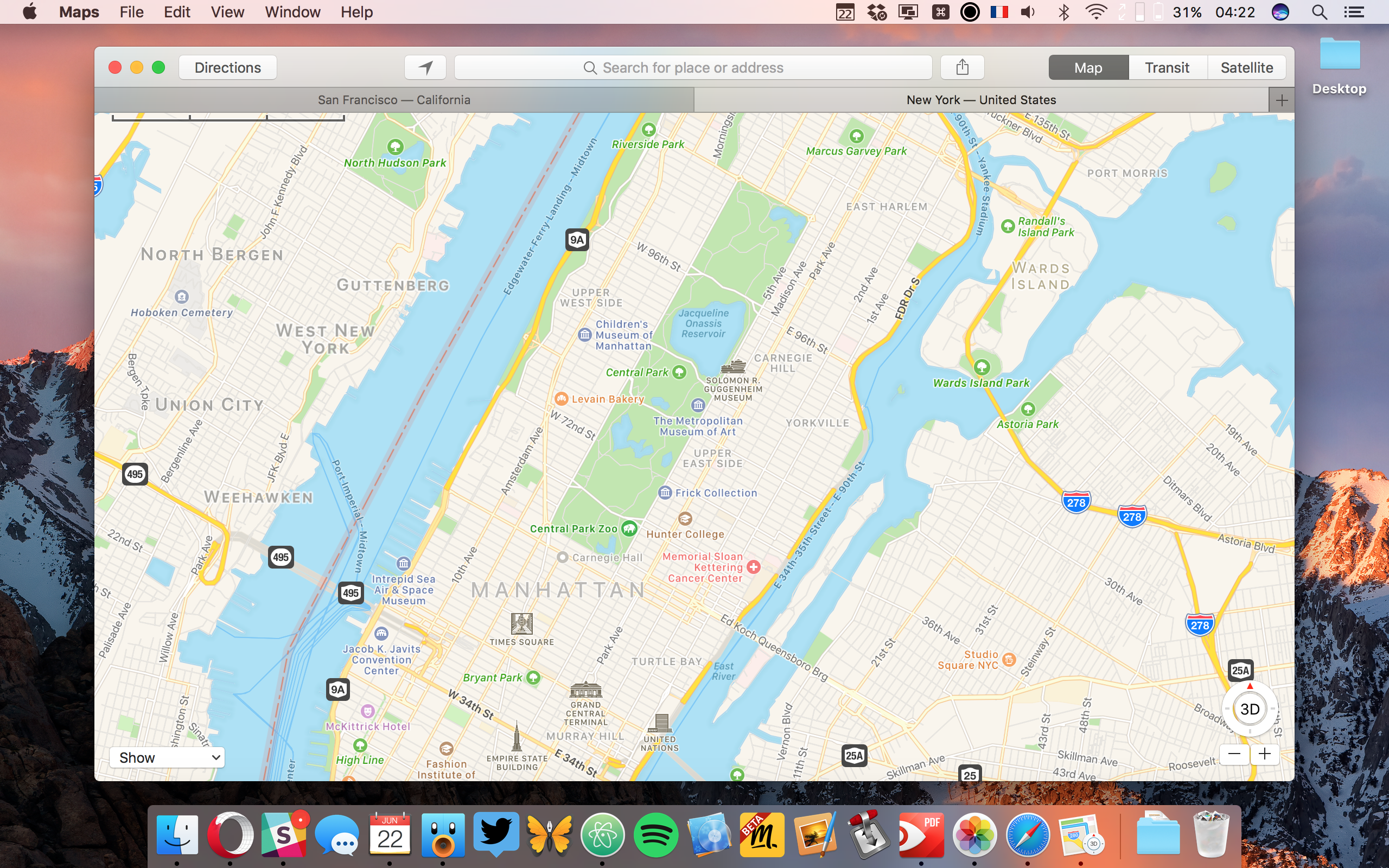 If you use Safari or watch a lot of videos in iTunes, you’ll be happy to know that Apple also added picture-in-picture for videos. I’ve been using this feature on my iPad quite a lot, and I’m happy to see that it’s making its way to the Mac. Safari isn’t the first browser to provide this feature, as Opera has had a picture-in-picture mode for a few months already.

So how does it work? Let’s say you’re watching a video on Vimeo. You can now pop out the video and put it in the corner of your screen. This video is resizable and will stay on top of your other windows. So it’s perfect if you want to browse the web and watch a concert video in the corner of your screen, for example. This feature makes a lot of sense on a laptop with limited screen real estate, and Apple sells a lot more laptops than desktop computers.

Messages is receiving a huge upgrade on iOS 10. While Messages on the Mac will display these messages, you can’t use all the new advanced messaging features from macOS, such as stickers, digital touch, invisible ink, etc. Slack-like feedback on messages made its way to macOS, at least. But I’m quite excited about a long-overdue feature: link previews. When you send a URL, Messages grabs the title of the page so that you know what you’re clicking on. 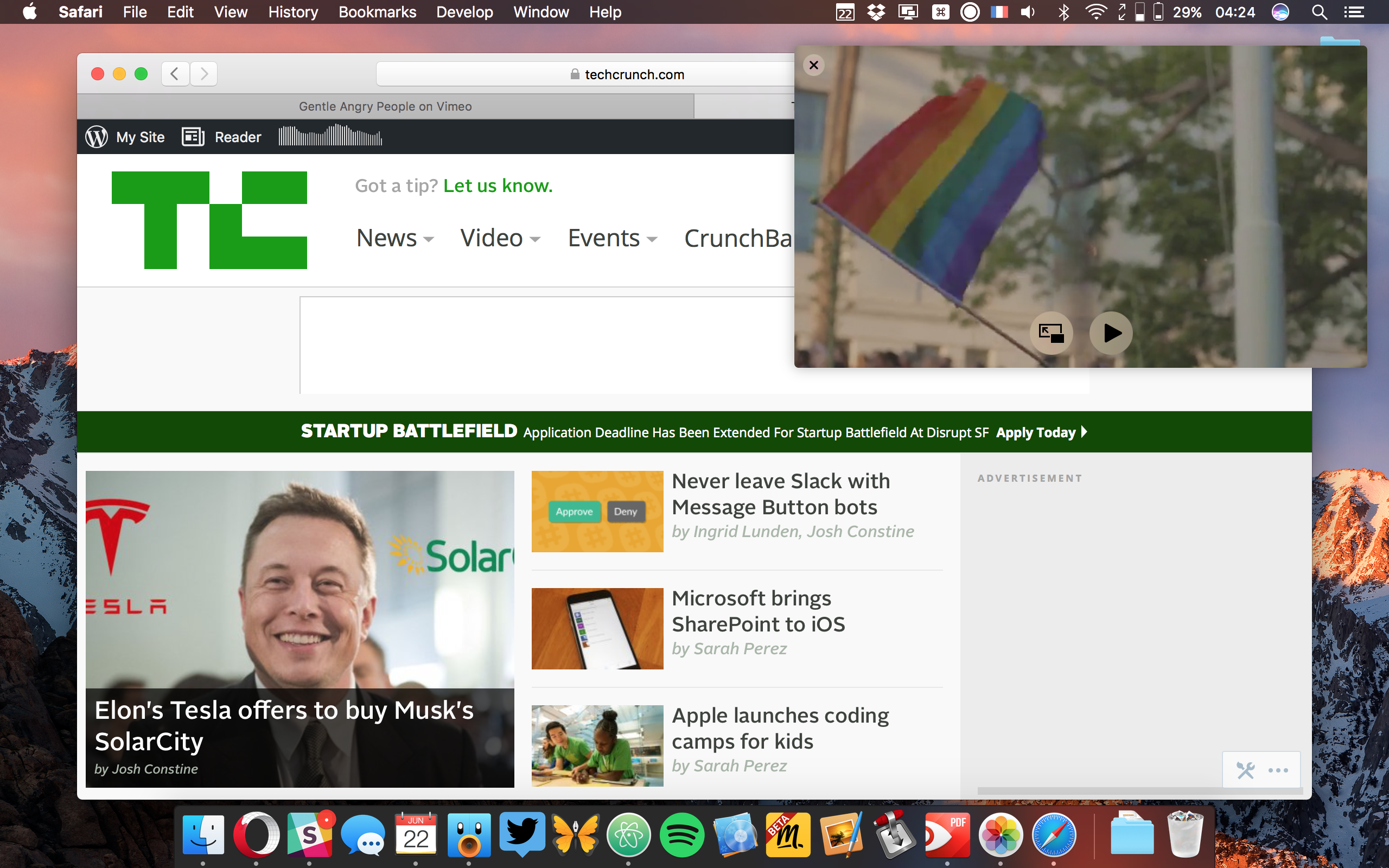 Let’s mention quickly all the other features that are going to ship in the fall. You’ll be able to unlock your Mac with an Apple Watch, but this feature didn’t make it into the first beta. Similarly, e-commerce sites will have to add Apple Pay support before I can try it. I didn’t install the iOS 10 beta just yet, so couldn’t test the universal clipboard. With this feature, you can copy something from your Mac and paste it on your iPhone. It could be useful for addresses, contact information or even photos and files.

And finally, iCloud can now sync your Desktop and Documents files. It can also optimize your storage by uploading old files to the cloud. I’ll have to test this feature over the long run this summer.

Based on this first beta, Apple has implemented some very pragmatic changes to macOS, starting with Siri, tabs in many apps and a much more intelligent Photos app. Other than that, Apple is porting many iOS features to macOS when it makes sense — picture-in-picture videos, Apple Pay in Safari and support for iOS 10 messages.

Now, let’s take a step back and think about this release for a minute. As you can see, there aren’t dozens and dozens of new features with macOS Sierra. But you might remember that El Capitan was already an evolution of Yosemite. In many ways, El Capitan made macOS more stable compared to Yosemite.

Once again, Sierra doesn’t revolutionize macOS. There are two reasons behind this. First, Apple is spread too thin when it comes to software. The company is going to update iOS, tvOS, watchOS and macOS this fall. That’s no small feat, and you can see that Apple is putting a lot of energy into watchOS 3 and iOS 10.

Second, it’s interesting to see that macOS isn’t the most important news coming out of WWDC anymore. People want to know what’s new for their iPhone. In some ways, the Mac has become a boring platform, and it’s not a bad thing.

While everybody is looking the other way, Apple is tackling complicated features, such as the upcoming Apple File System. Developing something like a new file system takes years. And now, Apple is willing to pack fewer features into macOS updates in order to tackle these big features.

Fifteen years after the first release of Mac OS X in 2001, the Mac is a mature platform. Dedicated Mac users don’t need new bells and whistles to get them excited about their computers anymore. They want a robust and stable operating system that will let them work as efficiently as possible. With less ambitious feature additions, macOS Sierra could do just that. You’ll have to read our full review in the fall to see if that’s the case.

Article updated to reflect that SiriKit will not be available for macOS Sierra.