I first tried on a prototype of the Basslet wearable subwoofer at SXSW 2016. Built by a Berlin startup called Lofelt and headed by CEO/cofounder Daniel Büttner and CTO/cofounder Gwydion ap Dafydd (ex-Ableton and Native Instruments leaders respectively) the Basslet has a strange appeal that I didn’t expect I would like and that I recognized as missing the minute I took it off.

The concept is that you wear this small device on your wrist while listening to or performing music and it vibrates in concert (and intensity) with the low end frequencies of the music you are hearing. It is built to run for up to 6 hours without heating up and is silent to the outside world.

As a bass player, perhaps I am a bit biased in always paying attention to those low frequencies, but I am definitely not the kind of guy who tricks out my rooms or vehicles with subwoofers or extreme systems either.

While the device takes a little getting used to, the first thing I noticed after putting on the wrist-worn Basslet and listening to an accompanying music track was that the vibrations are intense. However after I felt the device sync with the music track I was hearing, it actually moved to the background of my senses a bit.

It wasn’t as immersive as being in a club or venue and actually feeling the air move as speaker cabinets pulse, but it was in that range of adding a visceral sensation to the music and in an extremely small form factor. 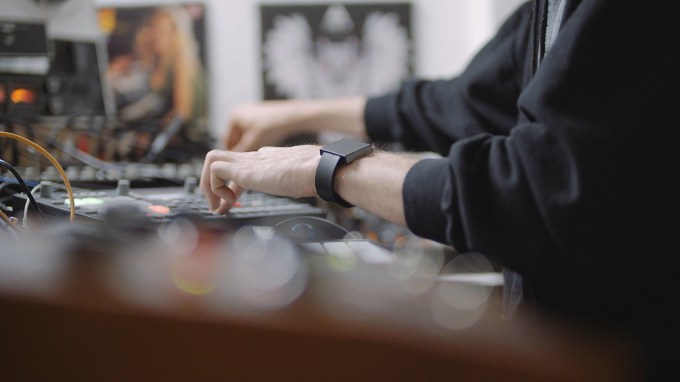 The most interesting thing I noticed was that after wearing it for a bit while listening to music…I really noticed its absence after I took it off.

I’ve seen and tried technologies like the SubPac (haptic backpack), but to me that concept feels more focused on gaming or home listening experiences because of its size, which is fine. The Basslet aims at a mobile, portable way for music lovers to add a new layer to the music to which they listen.

Powered by what Lofelt calls “LoSound engine,” the device has a frequency response from 10-250Hz. Even the prototype I tried on was sleek and low profile and the company indicates that this patent pending haptic feedback hardware is already being explored by many currently unnamable partners for a variety of uses in the gaming and auto industries.

The Basslet won’t be for everyone, but it’s a cool concept for music enthusiasts or gamers looking to add a little oomph to their experiences.

Having played hundreds of rock and roll shows myself, in some of the crappiest sound conditions imaginable, I could also see uses for this between members of music groups as a way to keep really locked in for high-volume live performances.

The team of 13 launches a Kickstarter today, but are receiving unspecified venture funding from Horizon Ventures and are planning a Series A round in Q1 of 2017.