Social commerce, the idea of buying products listed on social media sites, is huge in Asia. So huge that Facebook recently jumped into the space with a payments trial in Southeast Asia, and it is far from the only one eyeing an industry that’s thought to account for as much as one-third of online commerce in the region.

From a merchant’s perspective, Instagram, Facebook and other sites are easy ways to post photos of items you are selling in your ‘shop’, but discovery and payments are tricky issues for customers. There have been plenty of companies trying to bring a more orderly approach to things, the latest of which is Goxip, a Hong Kong-based startup.

“When you see anything online or on Instagram, the frustration is that you can’t shop even when people are using it as merchants,” Juliette Gimenez, Goxip CEO and co-founder, told TechCrunch in an interview.

Gimenez’s take is “shoppable Instagram:” an app that uses image recognition and a large collection of retailers — 400-500 merchants selling over two million items from upwards of 15,000 brands — to create a more engaging and ultimately more fruitful social commerce experience.

Goxip won the top startup award at the inaugural Rise conference last year, just months after being founded. The company started out with an Android app, but over the last year it has redeveloped that app, launched a version for iOS and closed a $1.62 million seed funding round.

That financing was led by an interesting source — the daughter of Malaysian billionaire Vincent Tan, Chairman of Berjaya Group — with participation from existing early investor Ardent Capital. Gimenez — who cut her teeth at Groupon and later LivingSocial in Asia — told us that the money is being used to expand Goxip from Hong Kong into Malaysia and other parts of Southeast Asia. (Where some of the world’s most notable social commerce markets, and active users of Instagram and Facebook, are located.)

The app itself works by matching uploaded images with fashion items sold by its merchant partners. That’s the basic premise, but Gimenez, co-founder and CPO YC Lau and team built a range of social hooks around that.

For example, I can sync my Goxip account to my Instagram account so I can post pics of my favorite outfits, and tag up to five related items from Goxip retail partners. (Ok, so, as a 30-plus male with limited fashion sense and a tendency to spend my free time at a laptop, I might not be the prime target, but it worked ok for me even without a Mr. Men collection in the options.) 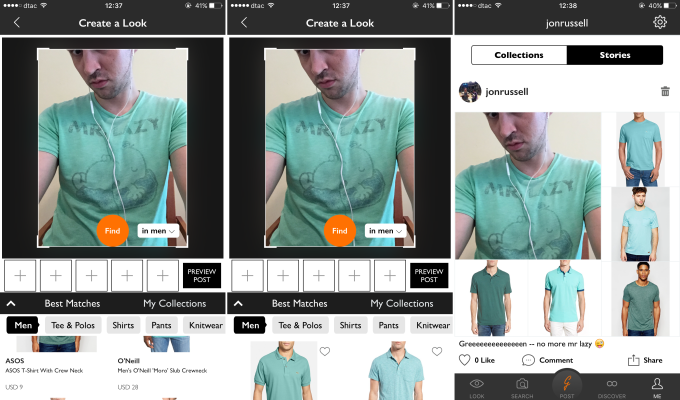 While it is cute for fashion noob like me to post pics of items on Goxip, the service has far more potential when it comes to established fashion figures, such as celebrities or high-profile bloggers. By posting their own photos, screenshots or more, they have the ability to express themselves to their fans and audience in a new way that is complementary to what they already do.

For example, a fashion blogger could use Goxip alongside Instagram to help sell products, or enable their audience find a specific look that they recommend.

You don’t need to rely on so-called taste makers though. The Goxip app lets you search through photos uploaded by users — including those from me! — which is another way to browse new looks or get fashion ideas on the go. You can also just upload a pic without making it public if you want to find a particular item that you somehow ran into on the internet.

The original idea behind Goxip was to meld celebrity and fashion news with commerce. You can still search for celebs and find matches with their threads, but the new Goxip appears to have a much stronger community focus than the original incarnation of the app. 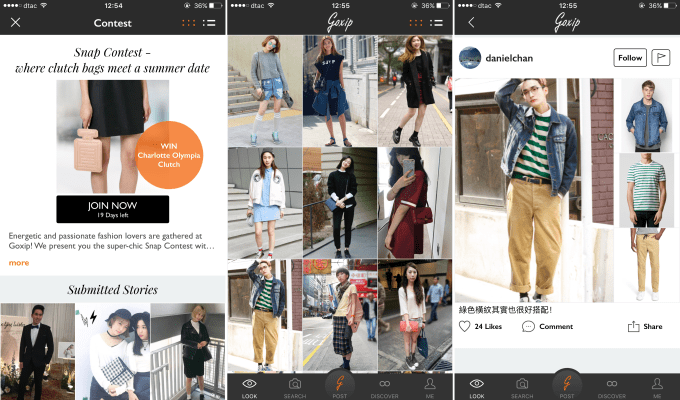 Despite the many figures experts have put on the space — the market in Thailand alone could be worth upwards of $510 million per year — it is a tough nut to crack. For Goxip, distribution looks to be the real challenge, so channeling bloggers and influencers is a logistic step. On that note, Gimenez said Goxip has plans to “help bloggers to monetize,” offer commission, and encourage high-profile users to open stores inside the app in the future.

But, with big companies like Facebook now actively eyeing this space, and tonnes of money pouring into e-commerce companies — such as Alibaba’s $1 billion investment in Lazada — the competition is truly fierce.

“We have a worldwide outlook but our primary focus is on Asia,” Gimenez said. “The opportunity lies in Asia [where] the mobile penetration rate is crazy and people are ready” to buy from social platforms.

Goxip is available for iOS, Android and at Goxip.com.