Looking to cut the cord and have a new Apple TV? A new app from Tablo can help. Launching shortly for Apple TV 4th generation devices — the new models that include access to the Apple TV App Store — the app allows you to both stream live television and watch recorded programs. The app works in conjunction with the company’s Tablo DVR, a $200 device that can access broadcast programs it receives via a connected over-the-air antenna, as well as record those programs to a hard drive for later viewing.

The company had promised this January that it had this app in the works, and would be launching it sometime this spring. Clearly, it didn’t meet that deadline.

The Tablo DVR, for those unfamiliar, is something of an alternative to TiVo. It’s competitively priced at $200 (for two tuners), while ongoing access to its TV Guide data is an optional and affordable $5 per month. And if you only really use Tablo for watching live television, you can easily skip paying for the guide data, which is mainly helpful for managing future recordings.

For more serious TV watchers, a four-tuner device is also available for $300. 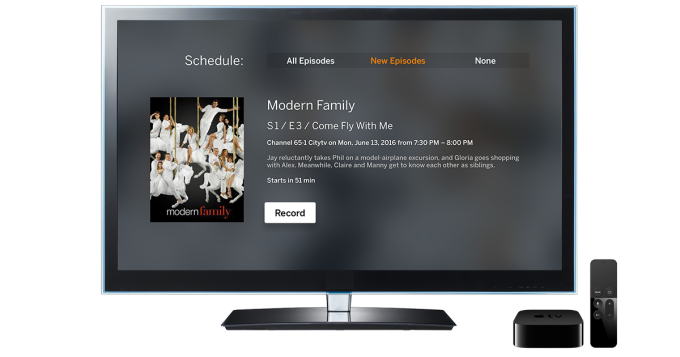 Tablo is not the simplest system to set up for non-technical users because it’s not an all-in-one solution. Instead, it requires you to attach your own external drive to serve as storage for its recordings. The advantage to this, of course, is that you’re in control of how much storage you have available and can expand that at will. However, it does mean you’ll have to buy another piece of hardware beyond the antenna, and you’ll have to make room for more equipment in your media center.

That said, once you get past the initial installation hurdles, the software itself is fairly straightforward to use. The Apple TV app offers a clean user interface, complete with colorful thumbnail images for show titles, and makes it easy to move between watching live TV or viewing your recordings.

Plus, the app will work with Apple TV’s voice-enabled remote, allowing you to ask Siri to skip the commercials or move forward or back in the stream (e.g. “Skip ahead two minutes” or “Go back to the start”). You can also just press the pause button instead, then swipe back and forth in the scrubber while viewing the fast-forward previews.

In the 1.0 release of the app, users will be able to watch live TV, and view and schedule recordings for programs airing in the next 24 hours. You can schedule both one-time and series recordings, says the company. Other features are planned for the months ahead, which will focus bringing feature parity between the Apple TV app and those on other platforms. That means things like the TV View, Movies View and Prime TV View will make their way over to Apple TV, as well.

It’s also worth pointing out that Tablo is not the only way to watch live TV on Apple TV. The Channels app works with the HDHomeRun TV tuner to offer similar functionality. Meanwhile, Dish’s Sling TV also just launched on Apple TV this week, but is focused mainly on live television, with a smaller selection of on-demand content. Plus, its channel lineup is cable TV, not broadcast networks, nor does it offer DVR functionality.

Tablo says its Apple TV app version 1.0 has been published to the App Store, where it’s pending approval. It will be live shortly, the company says.