Not that Hoodline has been avoiding revenue, but the only way it has monetized until now is through advertising. Dudley told me the team agreed that Hoodline’s long-term business needs more than ads.

“With the pressures on online advertising, it can’t support an entire newsroom,” he said. “So we’ve been looking for new ways to monetize what we’ve built for our local communities.”

The initial answer: Neighborhood Kits, which are embeddable widgets profiling everything about a neighborhood, including restaurants, schools, commutes and development news. Real estate agents (sometimes entire firms, sometimes individual agents) can then embed these widgets on their websites, giving prospective clients a better sense of where they might be moving.

By drawing on Hoodline stories and data, as well as content from partners such as Mission Local and SFGate, the kits are meant to be more comprehensive and up-to-date than your standard neighborhood guide.

“Many real estate agents told us that they needed much better neighborhood content than the static, easily outdated and incomplete information that existed,” said Jes Wolfe, Hoodline’s chief operating officer, in a statement. “I’m pleased to say these real estate agents are already buying our solution.” 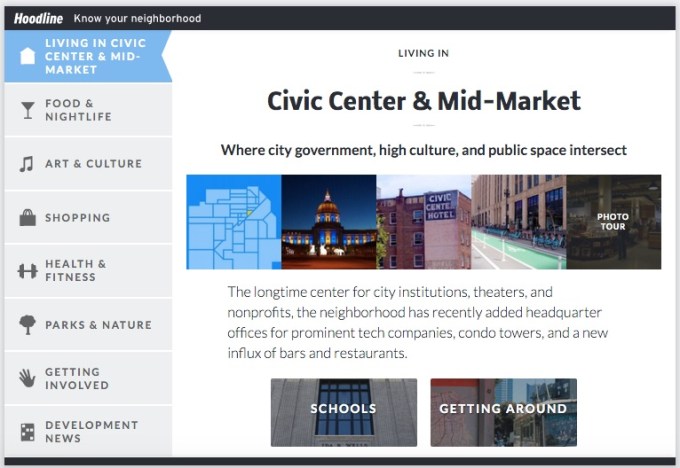 When asked if there’s a tension between Hoodline’s editorial mission and the kinds of content that helps sell houses and condos, Dudley acknowledged that the kits are serving a different purpose than the Hoodline site itself — so they probably won’t be heavy on crime stories, for example.

“There’s still the opportunity for neighborhoods to be shown in a full good and bad picture in our overall editorial body of work, but for this product, it’s important that we meet the customer need,” he said. But even in this “curated version” of Hoodline’s content, authenticity is important: “If the customer feels that this is not at all what it’s like to live there, we would hear about that pretty quickly.”

Dudley said the Neighborhood Kits will soon cover all 38 neighborhoods in San Francisco. As for pricing, he said the details are still being tweaked.

Founded in 2014, and with a newsroom led by former TechCrunch editor Eric Eldon (it’s his fault that I’m a tech journalist in the first place), Hoodline raised a $1.6 million round last year. Dudley has hopes to expand to other cities eventually, but he said the priority is to prove out the business model in SF first.