The term “fintech” has become all the rage; investors and media can’t stop talking about it. Many people also have been talking about the “bubble” in the tech industry, but could there be a “bubble” in fintech, as well?

The Wikipedia definition for financial technology is pretty daunting, and states global investment for fintech has increased from $930 million in 2008 to $12 billion in 2014. It even mentions Bitcoin and startups like Lending Club, TransferWise, Prosper, Affirm and Wealthfront.

The signs of a bubble are everywhere as banking executives like Sallie Krawcheck are leaving traditional banking jobs for startups. Even 60 Minutes featured a story about it that aired on May 1, 2016. 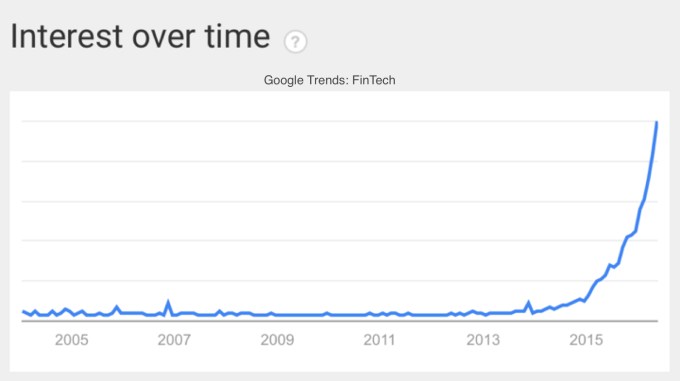 While fintech seems to booming, there appear to be some cracks developing in specific sectors like P2P lending and robo advisors. The P2P lending space has been under attack recently. The stocks of Lending Club and OnDeck Capital have plummeted and are trading at all time lows.

The lending industry is under intense scrutiny by investors and regulators as the CEO of Lending Club was forced to resign in a scandal. The U.S. Department of Justice has launched an investigation, which has people wondering if there are other cases of fraud associated with the management of the loans in the lending industry.

As long as the money keeps flowing, investors and entrepreneurs are going to flock to fintech.

The other problem in the lending space is the lack of capital available to lend out. The normal supply of capital from hedge funds, banks and other investors has dried up as they can find the same rate of return elsewhere. When interest rates were low, P2P lenders offered a great return. Now that rates have gone up, there are many other attractive investment vehicles like corporate bonds offering similar rates of returns. Investors have also become concerned about the transparency of the loans, and they are afraid these loans could have issues similar to the housing loans in 2008.

The P2P lending space will need to convince everyone that the Lending Club scandal is an isolated incident and that lenders have proper checks and balances in place to prevent fraud and toxic loans. This fear of 2008 is preventing large banks from buying lenders like Lending Club, Prosper and On Deck Capital until they can absolutely verify the quality of the loans. 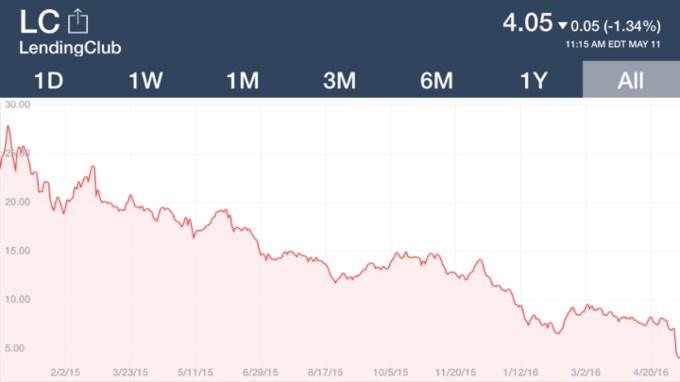 The robo adviser industry is also starting to have some challenges because customer acquisition costs keep increasing while margins keep decreasing. For the last couple of years, startups like Wealthfront and Betterment found success with the “set and forget” model of asset management.

However, this success has caught the attention of financial giants like Schwab and Vanguard, which have launched competing products that pushed down fees and commoditized this new business. Now with growth flattening out, these robo advisor startups will look to add new products to try to justify their high valuations. 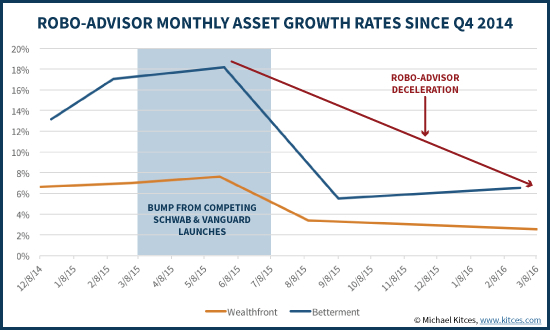 The large banks are not immune to the issues facing startups; their stocks have been declining, as well. Here is a chart that shows how they have performed relative to the S&P: 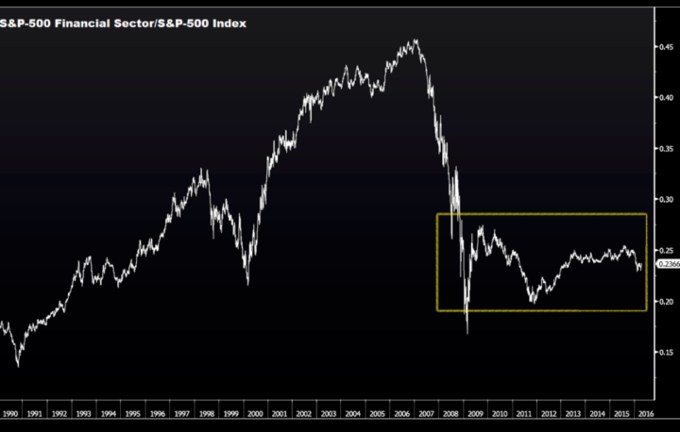 However, not all FinTech charts are bad as the price of bitcoin has been trending up while the number of blockchain transactions keeps increasing.

Bitcoin had its bubble burst in 2014, but it seems to have found stability as its popularity starts spreading globally.  Bitcoin rose nearly 20 percent in May and was up 35 percent in 2015 making it the best-performing currency against the dollar.

Exuberance in the startup community continues to grow as new financial incubators are launching globally. 500 Startups recently launched a fintech-focused fund and incubator. Barclays teamed with Techstars to launch the Barclays Accelerator and Yodlee just finished their second batch for their Y Next Incubator Program. Even PayPal just announced a fintech incubator in Singapore.

After spending the last decade investing in startups like TubeMogul (IPO), Buddy Media (acquired by Salesforce) and Robinhood, and from our experiences at StockTwits and BitPay, we know startups are going to have a hard 7-10 year journey to find success. Like every other industry, there are no shortcuts, but fintech is even more challenging because of all the existing regulations and incumbent banks. Indeed, in the last year, the CEOs of the banks have gone from defensive to aggressive.

Earlier this year, Jamie Dimon threw some cold water on the Industry — and it won’t get any easier as large banks like JP Morgan, Wells Fargo and Goldman Sachs remain in a very strong position, making it hard for startups to grow.

However, all these challenges won’t deter the irrational exuberance of new founders from trying to disrupt the sector. As long as the money keeps flowing, investors and entrepreneurs are going to flock to fintech. Unfortunately, it won’t be as easy or as quick as they thought it would be… but then, it never is.