Ninja Dude vs Zombies is an endless tap’n’slash arcade. You are a brave ninja trapped on a tower surrounded by hordes of bloody zombies. So of course, as with all things zombie related, the only way to survive is to kill those pesky zombies, who somehow have learned to climb the sides of your crumbling tower.

The controls are simple. Just tap to play. Your weapon at first is a ninja star, which you tap to throw to the right or left. You slowly start racking up your multi-tap combos, earning ninja cred and unlocking new characters as you earn money. There are more than one hundred cute ninja heroes each with their own features and settings. 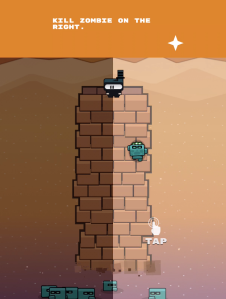 Then, there’s the whole deathline thing. Your weapon is only effective in short range, which is marked by a line across your tower. Killing zombies above this line keeps your tower afloat.

I never really had issues with my tower sinking. At the rate the zombies come at you, you are way less likely to become a zombie snack than crash to your doom. But, the moving tower does add some dynamics to the game.

Now let’s talk zombies, there are a few different types: your basic climbing zombie, your money zombies which are orange, some supped up fuzzy zombies, and then there are these green guys jump around unexpectedly making them harder to hit.

Overall, I found the game to be fun to play. The music is as silly as the concept and it’s mindless enough to play for a few rounds on the go or when you just want a quick break. Ninja Dude vs Zombies, which is currently a top 50 Action Game on iTunes, is a free download on the App Store.

Update: a post from the developer said the game was available on Android, but when I searched the store, it has yet to be released.