Digital media company Ellation is announcing a big push into streaming video with Vrv, which will offer a variety of channels aimed at gamers and other geeks.

Ellation is best known as the parent company of anime service Crunchryoll. Otter Media, the joint venture from Chernin Group and AT&T, acquired a majority stake in the company back in 2013 and invested another $22 million last year.

Ellation CEO Tom Pickett (who was previously vice president of content at YouTube) said that one of the main reasons for raising the funding was to launch Vrv. That won’t happen until later this year, but the company is unveiling the service with Microsoft today at the E3 gaming conference — Vrv will be available on the Xbox One (plus other, yet-to-be-announced devices) at launch.

Much of this information leaked early through an article in Variety, which positioned Vrv as a competitor to Amazon’s subscription video offerings.

“We don’t view ourselves as going head-to-head with Amazon,” Pickett told me. “We’re taking a different approach because we’re focusing on a particular audience segment … While most of the big, broad platforms are really focused on delivering video in a more one-dimensional experience, we’re trying to expand beyond the video in different ways to super serve that audience.”

In other words, instead of trying to create a video subscription that serves everyone, Vrv is trying to create something more targeted, with social features that allow viewers to feel more involved and part of a community. 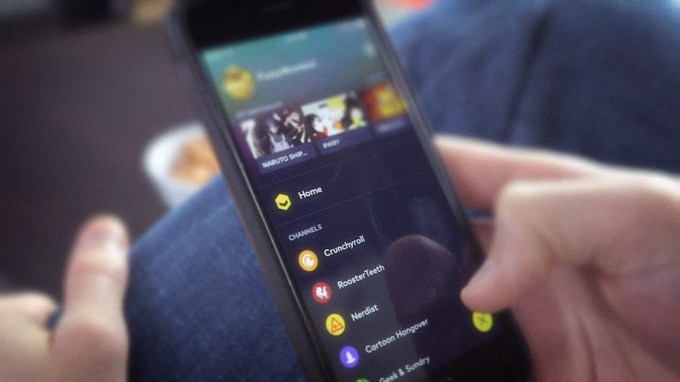 Who is that audience? Pickett said that when Ellation surveyed its viewers, it found that the most common identifier was “gamer”, and he described Vrv as trying to serve “this broader gamer ecosytem.” At the same time, he suggested that there’s “a whole cluster of different content categories” that could be relevant to them.

Crunchyroll (which has more than 750,000 paying subscribers) will be the “anchor” for the new service, with other channels including Rooster Teeth, Seeso, Nerdist Alpha and Geek & Sundry Alpha. Many of these partners already have a big presence on YouTube, but Pickett said Vrv gives them an opportunity to experiment with a premium, subscription offering (including, but not limited to, Vrv-exclusive content).

Viewers will be able to watch free, ad-supported videos on each channel. Then if they want full, ad-free access, they can buy subscriptions to different channels individually, at prices set by each partner. If you’re worried that those a la carte subscriptions could add up, Ellation is also working to create what Picket called “a core bundle” of channels that will be available for “a single price point that will be very competitive.”