As part of the slew of news released this week as part of Apple’s annual developer conference, WWDC, the company has also re-written its App Store Review Guidelines – the documentation that developers use to determine which apps will be accepted or rejected following their submission to the App Store. Apple notes that the guidelines themselves haven’t changed, they’ve just been written to be “more helpful” and “provide more context.” Unfortunately, that additional context isn’t yet available for new App Store rules, like the expanded ability to monetize apps via subscriptions.

Notably, too, Apple has consolidated the iOS and Mac App Store guidelines into a single document.

This latter change represents an overall strategy of treating Apple’s platforms – iOS, macOS, tvOS and watchOS – as being under the same umbrella, instead of having so many unique peculiarities that they require separate documentation. It also makes sense to combine the previous Mac App Store Guidelines with the App Store Guidelines as there was a lot of overlap among the rules.

In the updated documentation, Apple has set aside a special section for Mac App Store apps (2.4.5) which addresses how those apps can interoperate with Mac computers, what they’re allowed to do, and how they should be updated and maintained. 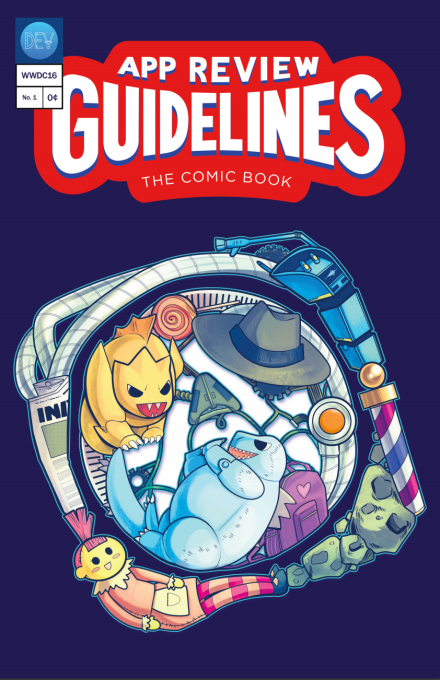 Oddly, Apple has also released a separate version of its new guidelines as a comic book, which is having mixed reactions.

Largely, though, Apple is correct in saying that nothing much has changed otherwise between the two documents. The rules themselves – which focus on topics like privacy, spam, pornography and other objectionable content, violence, kids apps, metadata, payments, and more, are the same.

There is now a longer section in the Guidelines that’s dedicated to apps that use subscriptions, which should be closely watched.

This follows the recent news that Apple is expanding developers’ ability to use subscriptions as a means of making money with their apps, beyond simple in-app purchases or paid downloads. Apple has not yet been updated to fully clarify the new rules regarding how subscriptions can be used, which is still causing a lot of developer confusion at the moment.

Instead, Apple has merely inserted a note here that says “We will update these guidelines in the coming weeks for the subscription changes launching this fall.”

In other words, developers looking to the guidelines for help in determining if their subscription-based apps will be accepted will still have to wait.

Subscriptions have been permitted in the App Store for some time, but only in particular categories, like periodicals, business apps, and media apps. Opening up this now popular business model to more developers could boost App Store revenues, and developers’ bottom lines.

But the news has been met with confusion instead of joy.

While Apple said that the subscriptions will be available to all apps, its “What’s News in Subscriptions” page adds a significant caveat to what’s going to be allowed by saying that “although all categories of apps will be eligible, this business model is not appropriate for every app.”

Developers are now uncertain if they can charge a subscription simply as a means of funding app maintenance, for example – something that isn’t necessarily an “ongoing service, such as cloud storage or massive multiplayer online games (MMOGs),” which Apple provides as example of appropriate subscriptions. If this was allowed, it could go a long way to curtail the issues with app abandonment. Apple said that it has reached 2 million apps in its App Store, but many have stopped being updated as developers don’t have time or money to continue.

Hopefully, Apple will think about these concerns when it finalizes the wording of the “subscriptions” section later this year. Stay tuned.