Marc Andreessen penned his famous “Why Software Is Eating the World” essay in The Wall Street Journal five years ago. Today, the idea that “every company needs to become a software company” is considered almost a cliché. No matter your industry, you’re expected to be reimagining your business to make sure you’re not the next local taxi company or hotel chain caught completely off guard by your equivalent of Uber or Airbnb. But while the inclination to not be “disrupted” by startups or competitors is useful, it’s also not exactly practical.

It is decidedly non-trivial for a company in a non-tech traditional industry to start thinking and acting like a software company. This is why the companies we most associate with “Why Software Is Eating the World” now are startups, with a few notable exceptions (like GE). Ultimately, there is no blueprint for how to make this transition, but I do think there are two principal lessons or starting points that can be learned from companies that have succeeded most over the last five years: timing and focus.

It’s important to appreciate just how prescient Andreessen’s idea was in 2011. At the time, the internet was pervasive. Amazon had been around for a decade, the iPhone was four years old and the App Store was three years old, doing $2.5 billion in revenue for millions of developers. Facebook had 845 million users, and Netflix was streaming 2 billion hours of content each quarter. Most people would have said we were finally fully immersed in the technology era and that the internet had changed everything. In other words, the future was here.

And, as Marc predicted, they would have been very wrong. As he put it:

“Six decades into the computer revolution, four decades since the invention of the microprocessor, and two decades into the rise of the modern Internet, all of the technology required to transform industries through software finally works and can be widely delivered at global scale.”

Uber was founded in 2009 and launched its service in 2010. Outside of a small but loyal community of riders and the local airport limo drivers in San Francisco, few people knew what Uber was in 2011, and no one was participating in endless conversations about “Uber for X.” Similarly, Airbedandbreakfast.com (later to be renamed Airbnb) was founded in 2008, but only reached 1 million listings in 2014. Today, it’s hard to imagine getting around in busy cities without these two services.

Smart players do not necessarily build out their entire vision of the future from top to bottom.

What Uber and Airbnb — like Andreessen — understood about “software eating the world” was that incredible innovations often emerge at just these moments when it looks like everything has been changed and we’ve reached the new normal. Uber and Airbnb saw the world of the cloud, the iPhone, the App Store, AWS and Google Maps, and said to themselves, “it’s not about what can we do now, but better; it’s about what can we do now that was simply not possible until today.” It’s that discontinuous leap — supported by the rise of new platforms — that led to a company dismantling the transportation industry or reimagining hospitality.

Netflix — while far from a startup in 2011 — is also an interesting case. They started by shipping DVDs to people’s homes so that people could watch movies without having to live through the hassle of making a trip to Blockbuster, then evolved into providing streaming movies in the comfort of people’s homes.

Like Uber and Airbnb, Netflix looked around at the platforms and infrastructure available to them (first the USPS, then broadband internet) and asked what they could do on top of those platforms that either no one had thought of (shipping DVDs) or had previously been unfeasible. In 2013 they took the discontinuous leap from technology provider and service to content creator.

Now they think of themselves far more as a movie studio like HBO that creates original programming, albeit one with a vast and unique understanding of viewing behavior derived from the analytics of its subscriber base. 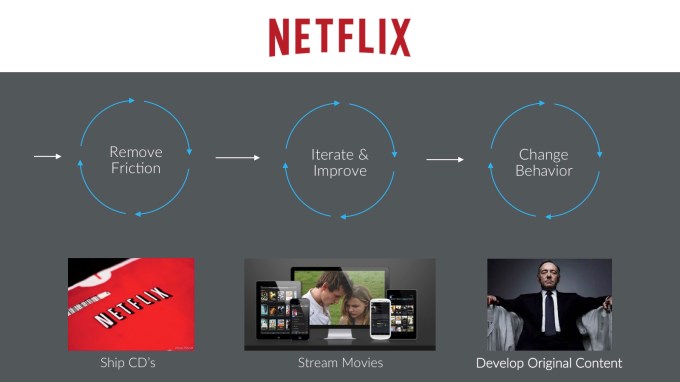 This is a recurring pattern of innovation. Smart players do not necessarily build out their entire vision of the future from top to bottom. They look around for inspiration on the problems they can solve for people (getting a ride, finding a place to stay, killing time) and then leverage the platforms available to them to come at the problem in an entirely new way.

Sometimes, like Netflix, the process is more incremental (or, as Ben Thompson would characterize it, “a ladder”); other times, the infrastructure is in place for a more dramatic, discontinuous shift.

Of course, having the vision is one thing, making it real is another challenge in its own right — hence lesson number two…

Focus on your core

For a traditional industrial or service company, making the transition to acting like a software company is a massive undertaking. You need to hire new people in every part of your organization; restructure around different economics; reestablish customer, partner and supplier relationships and expectations; overhaul infrastructure. The list is long and full of terrors.

If you have a healthy business with revenue streams locked in for years, that’s great. It means you can start on this problem now and know you may have a few years to get it right. That’s a great circumstance, but even in that situation, speed and the ability to test and iterate are going to be required; to move fast, you need to focus. As Steve Jobs once famously said, “Deciding what not to do is just as important as deciding what to do.”

Focusing on your core when it comes to technology makes it easier to focus on your end-customer experience.

A good way to illustrate the power of focus at the practical level is going back to Uber, which has enjoyed tremendous growth by solving a very real problem of providing to the masses a service to transport people easily, comfortably and relatively affordably. How has Uber been able to grow so fast and scale so quickly? As we just discussed, they saw the new reality of mobile — with every person, both driver and rider, having a connected computer in their pocket — and leveraged that new normal as a platform to bring people together in a way never before imagined or realized.

Uber doesn’t own their cars. They also don’t directly employ their own drivers. So, one might ask, what do they own exactly as a core asset? The core application and ecosystem around the Uber experience is their primary asset and differentiator. But to deliver that experience, they apply rigorous focus.

At the practical level, when you look at the technology components of Uber’s world-renowned app, they decided to rely on other core platforms and technologies to power many of the key elements.

They run on infrastructure provided by Amazon, so they can be up and available all around the world. Their mapping technology is provided by Google Maps in the form of an API, so drivers take the fastest routes and you always know where you are. Their messaging stack is provided by Twilio, ensuring you get that text message right when your driver has arrived. And their email service to send out things such as receipts to passengers is built on SendGrid APIs.

Uber leaves all of this to specialists who focus on these elements as their respective core businesses. What Uber instead focuses on is curating a world-class experience for their customers and solving the problem of transportation for the masses, one ride at a time. 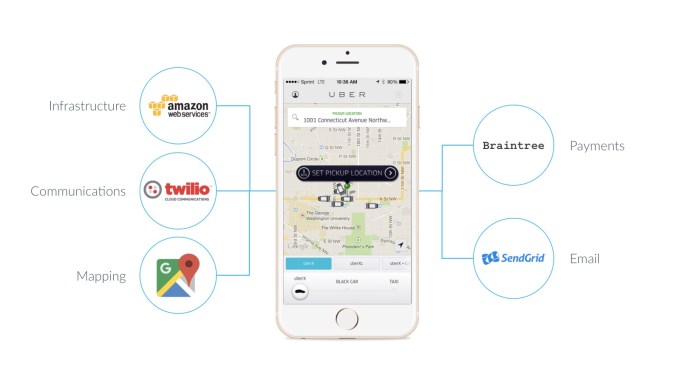 This laser focus allows them to put all their energy on the main problem they are trying to solve, and rely on specialists for other essential aspects that are critical to their app, but that don’t qualify as areas Uber needs strategically to build up as a core competency. The benefit of this approach is not only in getting the initial application built, but freeing resources from the ongoing maintenance of these non-core elements of the stack.

Notably, it also creates an innovation boost in the wider ecosystem, because each of these non-core elements is core to the supplier providing the service. These suppliers — or platforms — need to innovate very rapidly in their areas to always make sure they’re indispensable to their customers. It’s a virtuous cycle where Uber automatically gets the benefit of those innovations in its apps.

Every company should apply this calculus to its digital strategy. The next question centers around precisely how you determine which elements are core or non-core:

Focusing on your core when it comes to technology makes it easier to focus on your end-customer experience — and that’s what makes a great software company.

According to Constellation Research, more than 52 percent of companies that used to be on the Fortune 500 were no longer on that list in 2015. It would be safe to assume that the new entrants will all have created meaningful digital differentiation in their core business model.

The central question, therefore, is not whether every company will have to embark on some sort of digital transformation journey depending on their business, but rather how they will go about making it happen. By looking at the lessons of Uber, Airbnb and Netflix, we can learn a lot about the value of both being keenly aware of the technology ecosystem around us that makes the world ripe for disruption and the advantage of focus when there is so much to do and speed is so important.

In reality, most companies embarking on this journey will fail. As Andreessen said, “No one should expect building a new high-growth, software-powered company in an established industry to be easy. It’s brutally difficult.”

Of course, that’s also why it’s worth doing.