VOEZ is a new game out of Taiwan that is climbing the app gaming charts. It is part Rock Band, part DDR, but in a karaoke-esque setting. Put simply, VOEZ is an anime-themed rhythm game. You need to tap, hold and swipe as colorful commands fall to the target line. There are only a few different moves, but the difficulty of the game increases as you move on to more and more intense tracks. One thing that felt different to me is how the fall lines shift and move as you play the level. Unlike Rock Band where the gameplay is static, there is something ethereal about how the levels shift, pulsate and expand as you play.

Making the game extra challenging, to me at least, were the hard-to-spot white dots and the slide hold that shifts the track as you play. These were the game mechanics that tripped me up the most, but also make it more fun. 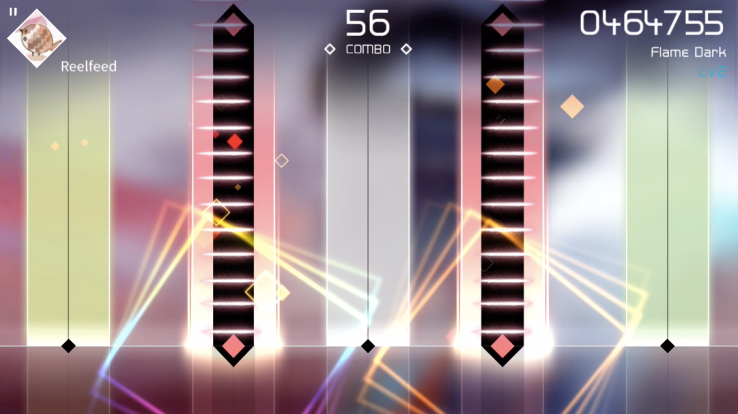 I was a bit surprised that I not only loved this game but that I was quite good at it. Despite the club-esque dance beats (which made me feel a bit like a DJ), there is something to the rhythmic play of the game that makes it equal parts exhilarating and relaxing. I tried the game on both my iPhone SE and full-sized iPad and learned that VOEZ is way easier and more fun on a smallish phone.

You can enjoy unlimited play of approximately 10 free songs that rotate through. If you love a certain level, you need to purchase a “key” to unlock the song permanently. Songs range from mellow pop, rock or intense techno. Song lyrics aren’t in English, but don’t worry, you can watch tutorials and navigate the game in four different languages, including English.

VOEZ is the second successful game from Taipei-based developer Rayark International. After their prior hit with Cytus, a similar-styled rhythm game, the company is back with something different enough that it doesn’t feel like a sequel, but in the same vein.

An important thing to note is that you need to be on Wi-Fi to download the game. The main app will require about 200MB of space, with each additional song taking up another 5MB or so. And that’s about it. VOEZ is fun and free on both iOS and Google Play. So the real question is whether or not you like it enough to make space on your phone.